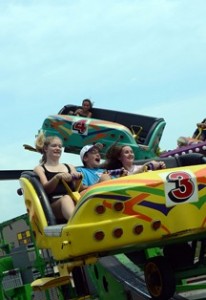 “During the time period the fair is run, the county is full of people,” said supervisor Hugh Mulliken, at the board’s Sept. 27 meeting. “I think a few minor changes could make the county fair the star fair of the state.”

The county fair was first held in 1871 and has been held regularly since 1928. Steve Jennerjohn, Treasurer of the Door County Fair Association, said the fair’s better years are somewhat in the past, but there’s still enough money to keep it running.

“We still have a healthy treasury,” Jennerjohn said in an interview. “But the last several years we’ve been running a deficit.”

Recently the fair association has been experimenting with different pricing structures and entertainment options, shying away from the bigger, paid-grandstand musical acts of the past like Charlie Daniels and America because they don’t bring in enough attendees to make them worthwhile.

UW-Extension Community Development Educator Rob Burke will be heading up the Fair Study Committee. At the board meeting, he said he wants to get input from as many people as he can before ultimately crafting a report for the board.

“I’ll probably want to hold at least one public meeting for anybody who wants to come and talk about what they think the fair can do better, maybe what it shouldn’t do, what it should do more of,” said Burke.

Jennerjohn said the fair association has conducted surveys in the past asking what people want out of the fair, but still hasn’t been able to draw as many people from the northern part of the county as it would like.

“I’m not sure we’ve been hitting the mass of people outside the Sturgeon Bay and Southern Door market,” said Jennerjohn. “Anywhere north of Jacksonport or Egg Harbor, people don’t show up. So how do we attract those people to show up?”

Supervisor Leo Zipperer wondered if the option of discontinuing the fair was on the table if the committee couldn’t come up with any ideas worth enacting.

“If you don’t come up with those kind of ideas…it should be one of your options,” said Zipperer. “I expect that it’s going to continue, but if it’s supposed to be making money, it doesn’t.

Corporation Counsel and Interim Administrator Grant Thomas said that it might be possible to support the fair by leasing John Miles Park to a private fair association for two weeks, but Jennerjohn is skeptical that there would be any associations willing to take on the Door County Fair.

“If that’s what it takes then so be it,” said Jennerjohn. “But I think there’s not enough density of population to support something like that.”

Supervisor Dick Virlee said it was his understanding that the fair wasn’t designed to make a profit, but to break even.

“It’s an important event, especially for the junior fair and the kids,” said Virlee.

Dawn Kuelz works as an advisor for the county’s 4-H Youth Development and the education liaison for the Door County Fair Association. In an interview, she said that the 200 or so children who enter 4-H projects in the fair each year look forward to the sense of community and achievement the fair provides, and she hopes that the Fair Study Committee will find a way to re-energize the fair.

“We’re hoping the community can gives us some new, fresh ideas to make the fair fun, friendly, and more marketable to a wider variety of people in the community,” said Kuelz. “It’ll hopefully provide us with an opportunity to think outside the traditional box of what we think of when we think of the fair.”