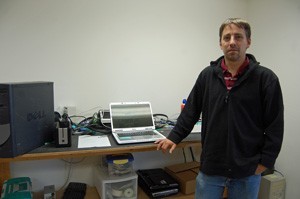 Lee Manson is the new owner of Door County Computer.

Last year as a technician for Door County Computer, Lee Manson logged 23,000 miles on his truck, which is almost enough to circumnavigate the Earth (it’s 24,901.55 miles around the equator).

“I do a lot of traveling,” he said. “I more or less live in my truck during the day. That’s the nature of the county. I go all the way down to Sturgeon Bay and Southern Door and all the way up to the island.”

But since Aug. 15, he has been doing that traveling as the new owner of Door County’s oldest computer repair company. Started in 1994 by Rick and Joan Gordon, it was the first commercial internet business in the county, providing computer repair services and consultation through Door County Computer, wireless service through NEWWIS (North East Wisconsin Wireless Internet Services), and dial-up service through Online Door County.

Manson joined the company as a technician in July 2012.

“I heard after I had come on board, basically, Rick was looking to get out of the computer repair business,” Manson said. “I approached him and asked if he would be interested in selling it. He was fairly enthusiastic about it and wanted to help me out and get it going. Rick had his time with it and was ready to move on, which is why he was excited about me taking it on. He’s dead set on keeping it going.”

Gordon continues to his other endeavors with NEWWIS and Online Door County.

Manson got his start in computers as a teenager “by playing with my own computer that my dad had bought many years ago,” he said. “I grew up in Gills Rock and I had a small wireless internet business up there and did a lot of computer repair for the locals. It’s always kind of been there. It’s just official now.”

Much has changed in the computer world since the Gordons started the business two decades ago.

“The market’s difficult,” Manson said. “It’s pretty easy to run to Walmart these days and buy a new computer. A lot of them that come here, we try to be really honest, I realize that computer is only a year old, but it’s tough to fix, especially laptops, they’ve made them so cheap.”

Manson realizes the availability of cheap computers is always going to be a drag on his business, but as a full-service company that does everything from in-store and on-site repairs to wi-fi installations for commercial accounts, he sees a good future for Door County Computer.

“My biggest goal is to build it up and get employees working in here,” he said. “Right now it’s just me and my wife, Mary, and through the winter it probably will be just us, just because we had to cut costs back to keep up. I hope through the winter, by putting the name out there, getting a new logo, getting people to know it’s there, we’ll bring it back up. Hopefully by next spring I can bring some people in to work here.”