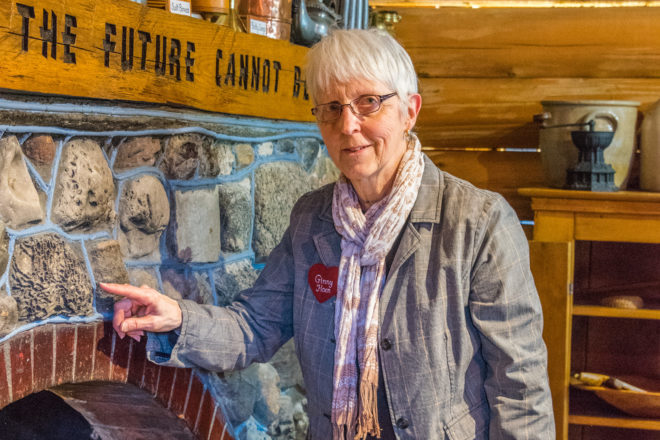 Assistant curator Ginnie Haen points out the unique rocks that make up the fireplace on the museum’s main level. Photo by Len Villano.

The Door County Historical Museum invites the public to walk the streets of early 19th century Door County, try their hand at sorting mail in a vintage post office, or get a rare up-close view of the peninsula’s wildlife during its 77th season in Sturgeon Bay.

This season will be a particularly exciting one as the county moves forward on conceptual plans for the museum’s future programming and expansion potential. In February, the county board approved the transfer of $500,000 from the unassigned fund balance to the museum and archives project and this spring, published a Request for Proposals for a consulting firm to develop a strategic plan for the museum. They are in the process of narrowing down the proposals that were submitted by the April 25 deadline. 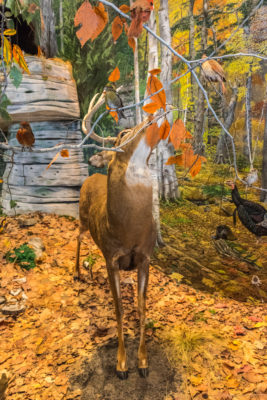 A deer nibbles on foliage in the four seasons wildlife display on the museum’s main level. Photo by Len Villano.

“Our goal with the strategic plan is to help us understand the vision for our museum in terms of pretty much everything from our operations, our programming, the future building, what’s the future cost going to be, what’s the county portion of that, what the membership base will be, that type of thing,” county administrator Ken Pabich said.

Pabich said most of the proposals have a timeline of between six and eight months for completing the planning process, and all of them include public engagement.

“They’re going to try to get input on the future,” Pabich said. “What are some of the things that people like about the museum? Where do they see it in the next few years? What are their expectations?”

Once the strategic planning process is complete, any recommendations will move onto the county board and then the fundraising can begin.

The museum’s four part-time staff include curator Maggie Weir and assistant curators Ginny Haen, Bill Rice and Nyla Small, who, with the help of a small but strong Friends group, play a vital role in sharing Door County’s history with the thousands of people who visit during its six-month season.

The museum has come a long way since it was built in 1939, a product of the Works Progress Administration, the largest of President Franklin D. Roosevelt’s New Deal agencies, which put unemployed Americans to work in exchange for monetary aid in the wake of the Great Depression. 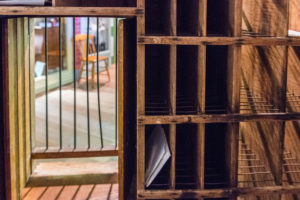 Guests are welcome to sort mail in the vintage post office slots in the lower level of the Door County Historical Museum. Photo by Len Villano.

Its collection was started by traveler and collector of curiosities Harry Dankoler (also its first curator), along with Door County historian Hjalmar Holand.

“We have pictures of the old museum in 1939 and it was just shelves and shelves of old junk, old stuff,” Haen said. “We have a curiosity shop downstairs that has some of the old stuff. It had nothing to do with Door County a lot of times.”

That curiosity shop is a place worth lingering in the museum’s lower level. Filled with Dankoler’s random finds, like a 1923 tarantula floating in preservation liquid and a stuffed armadillo, the exhibit is the only representation of artifacts from outside of the county that the museum has.

The rest is all Door County, from master taxidermist Mike Orthober’s spectacular four seasons wildlife diorama on the main level to the lower level street scene of storefronts and rooms representing the peninsula’s earliest businesses, from pharmacy to dime store, and its agricultural roots.

“There is so much down there,” Rice says. “I’ve been here a year and I’ve only seen a tenth of what’s down there. It’s amazing.” 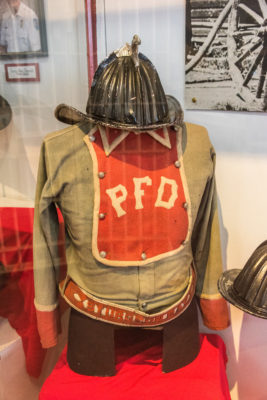 A vintage firefighting uniform can be viewed in the popular fire station portion of the museum, which also includes old firetrucks for children to sit in. Photo by Len Villano.

It may sound like a run-of-the-mill museum to someone who has never been there but assistant curator Nyla Small knows firsthand that few visitors leave the building feeling that way. After Orthober’s diorama, that is her favorite part of the Door County Historical Museum.

“When people come in with children, oftentimes especially when they’re a little bit older, maybe 10 or 12, they come in and they just look so sad and bored, Well what are we going to do in here?” Small says. “And many times, the parents are ready to leave before the kids are. That’s what I like to see.”

Part of the museum’s draw is an exceptional devotion to interactive displays. Its fire station, which houses three fully restored trucks, is the most popular with children, who can take their spot in the front seat of a 1920 Oldsmobile before heading to the back of the room to sit in an old jail cell or to the front of the room, where an old piano awaits.

“We have a lot of ‘Chopsticks’ and ‘Heart and Soul’ but we have some people who really come and entertain us sometimes with good music,” Haen laughs.

Visitors can try their hand at an old typewriter on the main level or head downstairs to the street scene (“Kind of a walk through town maybe a hundred years ago” as Rice describes it) to sort mail in the vintage post office exhibit. Just a few feet away stands an old fashioned phone booth, where a recorded message is prepared for whomever picks up the receiver. 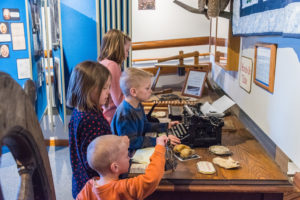 Children try their hand at an old typewriter in one of the museum’s interactive displays. Photo by Len Villano.

No matter a visitor’s preference for gaining information, be it video, photos or text, the museum offers it. And though it may appear as quiet as the peninsula’s golf courses and beaches from November through April, it’s not. Behind closed doors, the staff is preparing for the next season and dedicating time to working with the public.

“We do things all winter. It’s partly getting things ready for the season but it’s also answering people’s requests,” Haen said. “We get a lot of emails and calls from people. Some people want to know things about their family, some people want to know if we have pictures of a certain thing…research for people doing books.”

While its season reflects tourism sensibilities, Haen says the historical museum is pushing to be at the forefront of locals’ minds above all else, as an experience, a resource and something they can contribute to. It will continue its “Add to the Archives” events, encouraging the public to bring historic artifacts, stories or photos related to a specific aspect of history to the museum to help build its collections and continue bridging the gap between the past and future.

“We try to make people aware of: Don’t throw it away, come and ask us first.”