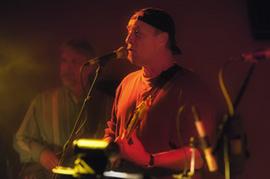 In the span of nearly 20 years, Big Mouth & The Power Tool Horns have become one of northeastern Wisconsin’s most popular bands. On Saturday, October 18 at 8 pm, the nine-member group will perform on the Door Community Auditorium stage in a concert that will feature an eclectic mix of blues, jazz, Big Band, Dixieland, and rock and roll.

Fortunately, Whitney resurrected a new band under the same name when he moved to Door County in 1989. With an ever-increasing fan base, the band added a four-piece horn section and a name change reflecting the addition of the new sound.

Although band members have come and gone over the years, Big Mouth & The Power Tool Horns have remained true to the music that identifies them. Crediting musical influences from Ray Charles and Stevie Wonder, to Keb ‘Mo and Sly Stone, the band continues to entertain with its mix of musical genre.

Big Mouth & The Power Tool Horns’ most recent album, Best ‘O’ Mouth will be available for purchase at the concert. Tickets are $20/$18, and are available at the Door Community Auditorium box office, by phone 920.868.2728, or by visiting http://www.dcauditorium.org. Box-office hours are Monday through Friday, 10 am – 3 pm; and Saturday, 11 am – 8 pm. The Door Community Auditorium is located in Fish Creek, just north of the town center on Highway 42.