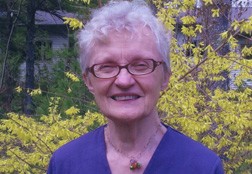 Tug of War
By June Nirschl

Mrs. Boland was pruning a red peony bush
when she told me she had been feeding Sport.
Sport? A rope tightened around my chest,
nearly stopped my heart. We had adopted
the stray, welcoming him as Stranger.

Who can say whose need was greater:
the childless cheese maker’s wife enveloped
in dark and silence, or two adolescents
whose parents worked from early morning
until the bar closed? No mind. He was ours.

To confirm ownership we wooed the dog
with better table scraps and summer play,
won that round hands down. With autumn
arrived a dilemma. Stranger could be left
outside or replaced by a puppy in the house.

Adolescents faced with a life or death choice,
pulled between a trusty stray and a just-weaned
pup. Daddy tipped the scales, assured us
young Art Meyer was a good shot and would
be gentle as he led the dog to the field.

Favorite poem: For its sheer gusto, Whitman’s Song of Myself ranks as one of my favorite poems.

Favorite themes: The living and the dying, with all their ironies, are themes enough.

Inspiration: The beautiful, the ironic, the comic.

Where do you write? Most often I write at my well-cluttered desk. Rough drafts can occur anywhere, frequently in the Baileys Harbor library.

How often do you write? Three to four times per week, usually in the dark of night.

How many drafts do you go through? Countless is probably an overstatement, but certainly a half dozen.

Any advice to beginning poets? Read prose and poetry. Write; find someone with whom you can share your poetry when you’re ready. Support is good. Then read and write some more. Go where your interest takes you.

Where can readers find your poetry? I was a co-author of Slightly Off Q and Two Off Q. Judy Roy and I are considering another joint venture. My poetry has been published in the Pulse, Wisconsin Poets’ Calendar, Wisconsin Fellowship of Poets’ Museletter, and Fox Cry Review.