One issue likely drew much of the crowd to the Door County Wisconsin Conservation Congress (WCC) spring hearing on April 8 –hunting and trapping in Wisconsin state parks. 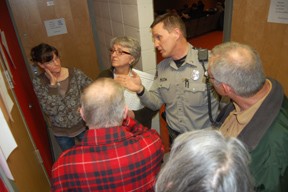 Attendees at the hearing filled out surveys on state natural resources issues. One survey question and one resolution addressed the Sporting Heritage Act, which expanded hunting and trapping in Wisconsin state parks last year.

When the Sporting Heritage Bill was passed, the Department of Natural Resources (DNR) originally proposed opening hunting and trapping in certain areas of state parks from Oct. 15 through the Thursday before Memorial Day. The Natural Resources Board (NRB) limited those proposed seasons and only allowed hunting and trapping from Nov. 15 through Dec. 15, and April 1 through the third spring turkey season.

Question 70 asked whether voters would support expanding hunting opportunities in state parks from the plan approved by the NRB to the plan proposed by the DNR.

The crowd voted for shorter seasons. Out of the 137 people at the hearing, only 22 people (16 percent) supported expanding the hunting opportunities to the plan proposed by the DNR while 109 people (80 percent) did not. Six people did not vote on the question.

Results weren’t the same around the state. Sixty percent of voters in Wisconsin supported expanding hunting and trapping seasons in state parks.

That wasn’t the only opportunity for people to reflect on hunting and trapping in state parks. Carol Schmidt, Colleen Malmen and Carole Vande Walle submitted a resolution suggesting the state legislature failed to properly inform the public about the amendment to the Sporting Heritage Bill that expanded hunting and trapping in state parks, and therefore violated open meetings laws.

“It’s very evident that people were not informed, and most people had no idea until 2012 that hunting was going to be allowed in the parks for seven and a half months out of the year,” Vande Walle said.

Their resolution asked voters if they supported having the WCC recommend changing hunting, trapping and fishing rules in state parks to the rules allowed before the Sporting Heritage Act.

“Parks had much more authority to allow hunting and set hunting dates and set all kinds of things in the park with the old way,” Vande Walle said. “With the law as it is it takes away parks’ rights to make decisions.”

Out of the 123 people who voted on the resolution, 98 people (almost 80 percent) supported changing hunting, trapping and fishing rules back to those allowed before the Sporting Heritage Act. Twenty-five did not.

Resolution questions passed this year could be listed on the official survey next year, then presented to the state legislature based on survey feedback.

“The [DNR] and the board use the congress as a sounding board or ask them to go out and get feedback from citizens on various things,” said Kari Lee-Zimmermann, conservation congress liaison. “They testify to the board on issues after they’ve gotten feedback from the public.” 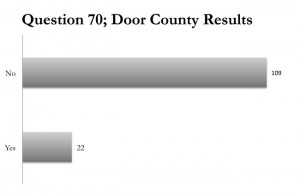 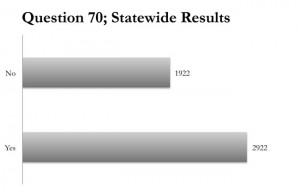 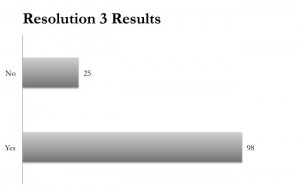