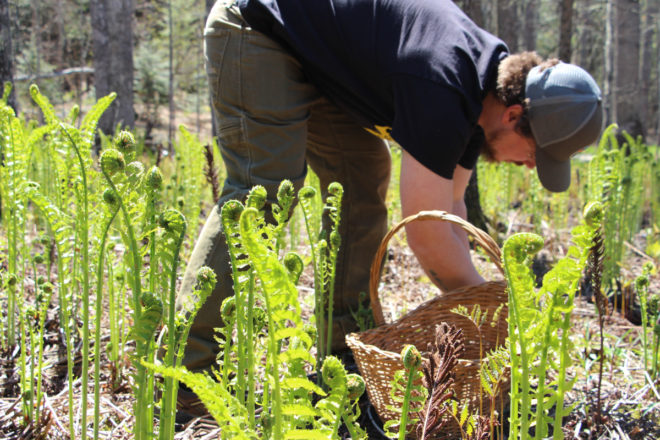 Matt Chambas forages for some fiddlehead ferns to use in one of his dishes. Photo by Jaime Mead.

“Something I’ve been passionate about is actually growing food, being the gardener,” Chambas said. “I wanted to make the transition into doing that again.”

Chambas is a well-tenured chef at Door County’s Wickman House and Trixie’s, originally training at the renowned L’Etoile in Madison.

“No cheating,” Chambas said, adding that he might bring in a lemon or lime here and there. “I wanted to get back to really serving local food and not just saying you buy some lettuce and that makes you local. We want to take it seriously and be strict with what we do. We want to really show people what we have up here and base our meals around that.”

Chambas and Mead will get much of their produce from Hidden Acres Farm in Sister Bay, where they both work in the garden. But Chambas is also an adept forager for mushrooms and greens in Door County’s forests.

He said the small dinners give him the opportunity to use rare ingredients that local restaurants could never sustain for hundreds of customers.

“I’m not trying to get too crazy but there is a lot of stuff that’s out there that I want to get more involved with,” Chambas said. “All the dinners are going to be 20 to 30 people max and we wanted to keep it that way so they can be done more intimately and we can use the ingredients we want instead of stretching it out too thin among 300 people.”

He mentions cattails, milkweed pods and too many varieties of greens to name. They have also tapped the skills of Discourse owner Ryan Castelaz for boundary-pushing beverages at dinners hosted at Hidden Acres Farm.

Sara and Collin Doherty, owners of Roots Inn & Kitchen in Sister Bay, are happy to welcome Door County Underground in their kitchen every Friday night this year.

“We have the same target audience as far as local food goes,” Sara Doherty said. “And we’re tiny so it seemed like a good fit.”

“The whole point is to highlight and showcase the main ingredients in every dish, during every dinner, on every course,” Chambas said. “There’s a lot of great restaurants up here but we want people to know that we’re trying to push the boundaries of great food.”

There is limited seating at each dinner. To learn more about Door County Underground or to reserve your spot at their table, visit doorcountyunderground.com. 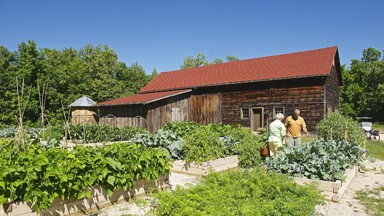