“This is not something we needed.”

Those were the words of Liberty Grove Town Chairman John Lowry as he watched firefighters fight a fire at the Viking Grill in Ellison Bay Wednesday afternoon, Sept. 1. 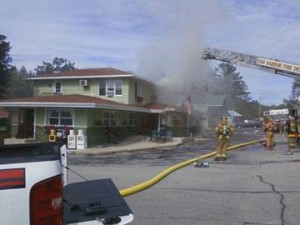 A fire at the Viking Grill Sept. 1 started in a fryer.

The fire caused no injuries but did extensive damage to the kitchen of the Northern Door staple, famous for its fish boils and small-town feel. The restaurant was even featured in the movie Feed the Fish last year.

The fire began around 2:15 pm, when waitress Tassie Knudson spotted smoke coming from the fryer.

Knudson said the cook shut the fryer off, then they saw a flame flicker. After a cook sprayed it with the fire extinguisher he came into the dining room to give the all clear. Then Knudson heard a pop.

“There goes the Ansul!” she said. “When we looked back in the kitchen all you could see was flames and smoke.”

An Ansul system is a fire suppression system installed in restaurant kitchens.

Owner Dan Peterson was there when the fire started, and after everyone was out safely, he said his next thought was “Oh crap, we’re going to lose Labor Day.” He paused, looked back at his restaurant, and continued. “Well, we’re gonna lose a lot more than Labor Day.”

He was looking at brown smoke still billowing from his restaurant’s upper windows, where firefighters were cutting through the roof.

“It’s a piece of equipment we use every day. It wasn’t carelessness or anything, just something that happens,” Peterson said. The main restaurant will certainly be closed for the foreseeable future, but Peterson was contemplating honoring a reservation in the evening. 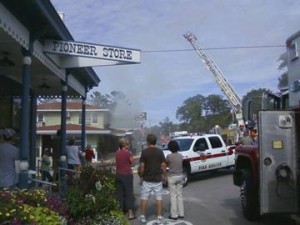 The Viking was un-scathed by the explosion that destroyed the Pioneer Store across the street in July of 206.

“I’ll probably still do a fish boil tonight,” he said. “What else am I gonna do?”

The Viking is a true family affair. Peterson has owned the restaurant since 1984, and the staff is close knit. Knudson’s two sisters work there, as do her two sons, niece and nephew, and her daughter-in-law. 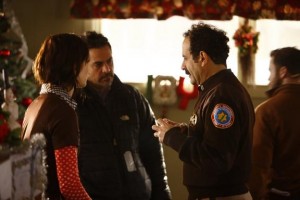 Director Michael Matzdorff (center) works on a scene for Feed the Fish at the Viking Grill with Tony Shalhoub (right) and Katie Aselton (left).

As the staff watched from behind fire trucks emblazoned with the names of every department north of Sturgeon Bay, they scrambled to think of a way to get the restaurant open using the other buildings on the property. Friends offered to pitch in time and equipment to outfit the buildings, but Peterson wasn’t thinking that far ahead just yet.

The scene was eerily similar to that of four years ago, when a propane leak caused an explosion that killed two people and destroyed the Pioneer Store across the street from the Viking.

“This place survived a explosion,” Knudson said. “Now we get this.”