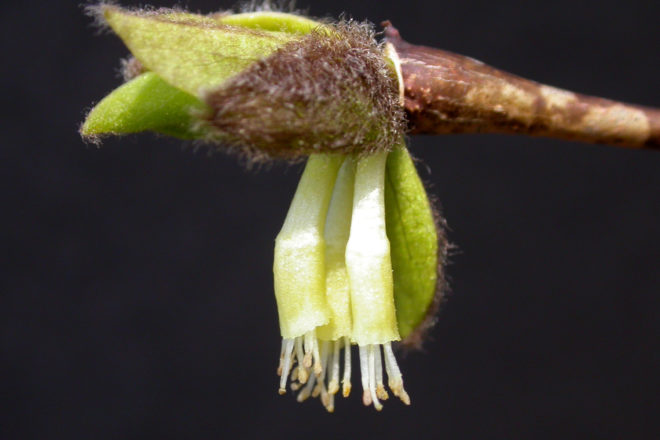 The extremely hairy bud scales show above the flowers of the leatherwood. Photo by Roy Lukes.

Every now and then, through pure luck, you accidentally stumble across what may be one of the largest trees or shrubs of its kind in the county. It happened as I was watching my friend, Max Martin, work on making a small cherrywood box in his workshop. It was late in the afternoon when I glanced out the west windows of his shop and saw one of the biggest leatherwood shrubs I’ve ever seen. As my good friend of past years, Murl Deusing, often said, “Look around you!”

The leatherwood is one of the most unusual and beautiful native shrubs I first came to know when I moved to Door County in the mid-1960s. Because the small plants tend to be so inconspicuous during the summer, the best time to become familiar with them is in early spring just before and during the blossoming period.

Like many other people who associate the genuine arrival of spring with the opening of the first wildflowers, unlike the date indicated on the calendar, we too scour the woods in search of the hepaticas. They are always the first to bloom at our place on the sun-drenched south-facing slopes in the hardwoods.

By far the two earliest flowering native shrubs in our region will burst forth with their unusually tiny blossoms much sooner than most people think of looking for signs of spring. Both are in blossom within a week or so after the twigs are brought indoors to be forced in vases of water. They are the leatherwood (or moosewood) and Canada buffaloberry, Shepherdia canadensis. A word of caution: please cut only a few twigs in your own woods or with permission from the owner of the woods in which you will be hiking.

Both names carry a hint of northerly toughness. Moosewood, Dirca palustris, is a small, many-branched, two to six foot rounded shrub with arching branches that favor rich deciduous or mixed woods. They tend to do very well in the company of American basswood and sugar maple trees.

An unusual feature is its peculiar, jointed twigs. Each joint swells to resemble a miniature golf tee. The outstanding characteristic of this shrub, usually in bloom here by mid to late April, is its extraordinarily tough and pliable bark. A thin twig has such unusual flexibility and sinewy strength that the American Indians of this region frequently used them for making bow strings, fishing lines, baskets and thongs – hence its other name of leatherwood. A few of its other common names are rope-bark, wicopy and American Mezereum (me-ZEER-e-um), an older family name. It is actually a very small family, the leatherwood being its only native member in eastern North America. 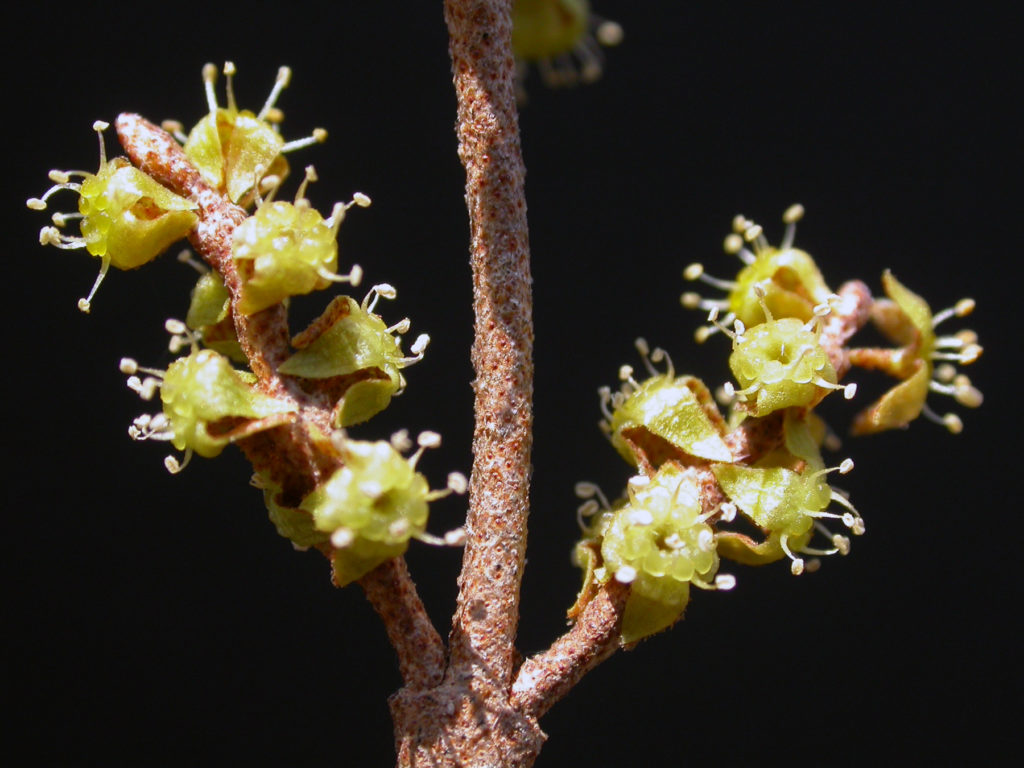 Buffaloberry flowers are so tiny you may walk by and never notice them. Photo by Roy Lukes.

I look at its winter buds, which now are beginning to swell slightly in size, and I am reminded of fuzzy brown Q-tips. The light yellow, half-inch-long blossoms of the leatherwood lack petals and instead consist of thin cylindrical tubes. The flowers emerge from the dark brown, fur-like bud scales before the beautiful yellow-green leaves appear. Eight delicate stamens and a long, thread-like style adorn each blossom.

What never ceases to amaze me is how easily many people pass by one of these shrubs, while in full flower, and never cast a glance. Perhaps it is because of the small size of the blooms and the deciduous trees and other shrubs being so far from coming into leaf. Obviously, these people are not expecting to find a shrub in blossom. Use a magnifying glass for a really close look at these little beauties.

The shrub in many springs becomes a lifesaver for various species of wild bees. By this time of year, the bees are close to starvation and the nectar and pollen from the leatherwood may help pull them through. The shrub comes into fruit in May and June, and is eagerly sought after by birds.

My belief, after hiking in many woods throughout Door County, is that these shrubs are more abundant in the northern reaches of Door County. The woods of the Clearing near Ellison Bay, for example, have a wonderful stand of them. Max Martin tells of someone he knows who has a woods south of Rhinelander where the leatherwood is by far the most common shrub – hundreds of them in the understory.

After the leaves of the shrubs have formed their yellow-green color makes locating the plants, even from a distance, quite easy. At one site that we have come to know, you can count one after another of these handsome plants while driving by. They are growing on a ledge-like formation, several feet above and within 30 to 40 feet of the east side of State Highway 42, about two miles south of Fish Creek. Remember to look for the light-colored foliage starting in May.

Become familiar with especially the leatherwood and Canada buffaloberry, and when the first leek leaves are appearing in the woods and you are rejoicing over the soft spongy turf underfoot, suddenly you’ll look up and there they’ll be: moosewood and buffaloberry in full bloom! And you will know it is spring!