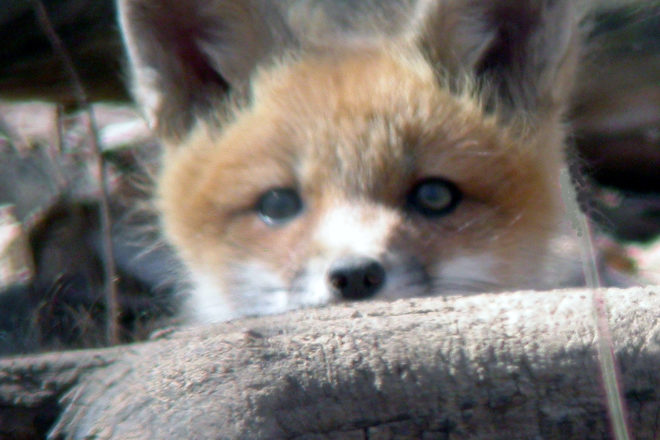 A young red fox kit looks curiously at Roy as he photographed it from a distance with a telephoto lens. Photos by Roy Lukes.

How would you feel if someone was constantly trying to steal the coat off your back? Such is the entire life led by most red foxes.

By late March the faint whimpering sounds of the fox pups, or kits, will be heard from deep within the den concealed in the earth, perhaps under tall grass on the south sunny slope along the edge of a small woodlot.

Mating occurred around seven to eight weeks earlier, the gestation period averaging between 49 and 56 days, and the 4 to 10 young will be born blind. Their eyes will open after nine days, they’ll be playing outside at three weeks old and by the end of two months they will have been weaned. They will be quite independent of their parents by five months of age and will be fully grown at 18 months.

Soon they will start the unending challenge to avoid the hunter and trapper, whose obsession during the legal season will be to “outfox” the fox. Fortunately these small collie-sized animals are noted for their high intelligence, keen sight, hearing, sense of smell and overall wiliness.

I go along with the thought that the red fox may be the world’s best destroyer of mice. You would think that farmers and especially orchardists, whose fruit trees are prone to the gnawing teeth of field mice, would welcome the fox to their property.

Compounded by the constant threat of hunting dogs, guns and traps, winter’s harshness makes life challenging for Reynard. At times they are even known to dig for frozen apples beneath the snow. Parasites, both external and internal, also take their toll, and a small number of rabid foxes have been documented in past years. In most cases these can be attributed to contact with feral dogs and cats that are commonly the vectors of rabies. 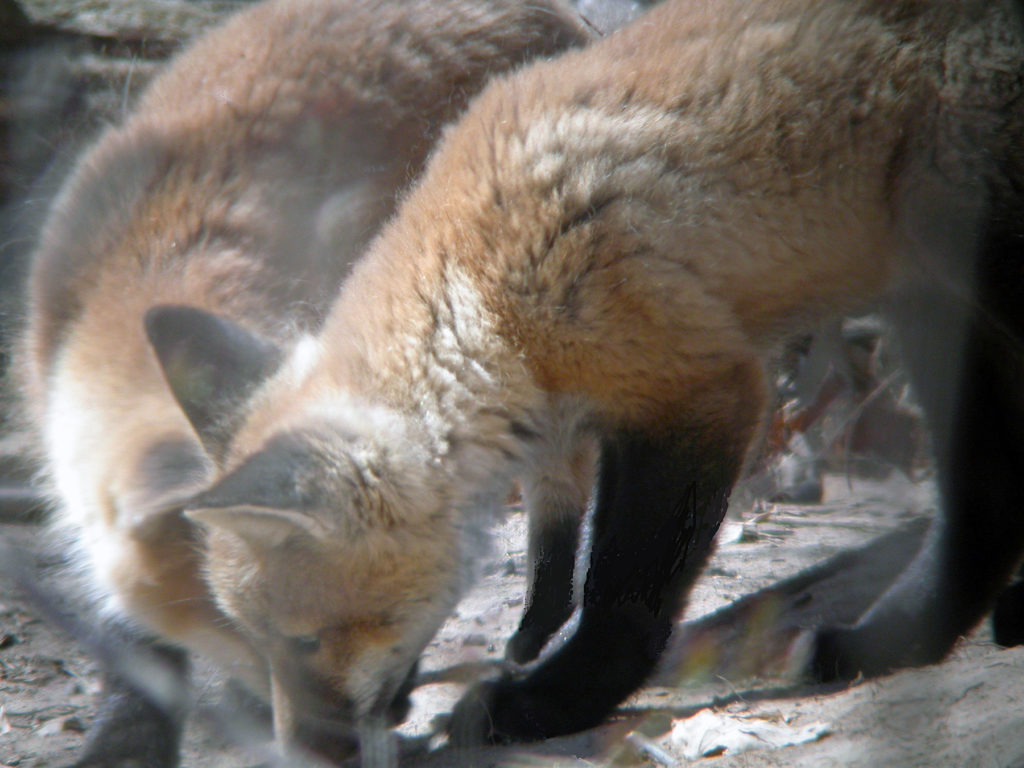 Two red fox kits search for something interesting near their den.

If you think your chickens are safe in a coop that has some openings up to 3½ inches in diameter, guess again. A 10-pound, fully-grown red fox has been known to go through a hole that size! An adult fox can be about 41 inches in length, including its 16-inch tail tipped with white, and can weigh from nine to 13 pounds, rarely as much as 15. Males tend to be slightly larger than females.

Now that spring is here the openings on grassy fields and fencerows will help the diets of the foxes steadily improve. Mice especially will become a more staple part of their varied diet that commonly includes many large insects, such as grasshoppers, crickets and wild fruits.

Studies have found that very few healthy grouse or quail are taken by foxes. Invariably the remains of these game animals found by people at the foxes’ den entrances were road kill that were recycled by the foxes.

Even though I’ve actually seen only the typical red fox having its characteristic tawny reddish-brown coat, black legs and feet and a white-tipped bushy tail, literature tells of three other fairly common forms of this creature.

The cross fox is more common in the Sierra Nevada region and is known for its red-brown coat having heavy black markings, like a cross on its back and flanks; hence the name of cross fox.

A silver fox has black hairs mixed with some white-banded guard hairs. They are fairly common in Alaska along with the black fox, a melanistic form of the red fox. This is the rarest of the four varieties of red fox and also is most often seen in Alaska.

In addition to the four distinctive forms is the so-called “Samson” fox, one that has no guard hairs but rather a wooly pelt. It is known to be quite straggly and worthless to the trapper or hunter. The “bastard” fox is midway between a black and red, and has a dark smoky coat.

Gradually the red fox will begin to molt as warm weather approaches and will continue to lose fur into early fall. Its new pelage growth will usually be completed by November. This long period of molting, approximately six to seven months, results in a lot of shabby looking foxes.

When its natural food supply is at its peak, especially mice, the fox population will also be high, as many as 150,000 in Wisconsin. This averages out to be about 10 per square mile, which sounds very high. Food shortages, hunting and trapping pressure, and diseases can reduce this number to 15,000, or one per square mile, in two or three years.

I’ve been asked if there is a bounty on foxes in Wisconsin. There was a bounty on these animals for about 75 years but finally as a result of scientific studies they were proven to be a waste of taxpayer money. Habitat improvement for various kinds of game animals was found to be a much sounder investment of our money.

How I value a tape recording I made of a very frustrated red fox unsuccessfully attempting to gain entry into my neighbor’s chicken coop when I lived north of Baileys Harbor. Its continuous blood-curdling wails and screams didn’t succeed in getting him any food, but I dare say the poor chickens were shivering in their feathers! This went on for about a half-hour until finally “Red” lost interest and went elsewhere for breakfast.

How I love the red fox, master of his three-square-mile kingdom!