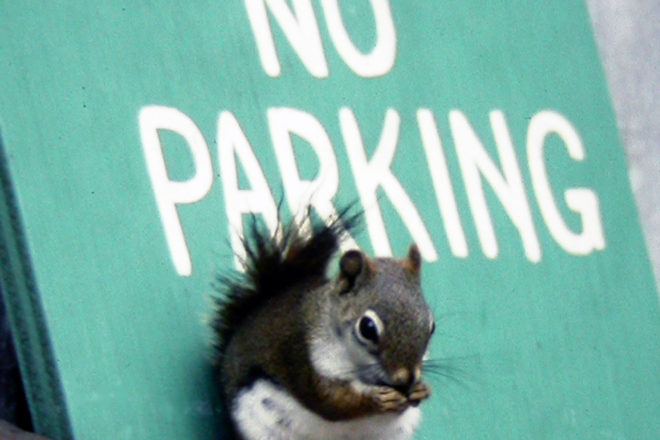 Meeko, an impudent red squirrel, does not heed any rules made by humans. Photos by Roy Lukes.

The official proprietors of our outdoor bird feeders and brush piles have finally attained their true color. All summer long those pugnacious, loquacious, sassy “pirates” were quite brown.

Now the red fur of these impudent little squirrels marks them well. Their seasonal change of color is due to the gradual replacement twice a year of the hairs of the body.

The squirrel’s winter fur is thicker, longer and softer. Even its tail, a most essential asset, is bushier than in summer. Naturally it will serve this fearless urchin as a warm shawl during the coldest season of the year. It will also aid him in balancing, work as something of a parachute when leaping or in case of a fall, and will serve as a device to express emotion.

The ears in winter bear short tufts of black hairs that are replaced in summer by shorter red hairs.

Even the soles of their feet are heavily furred, with the exception of the tubercles at the base of the toes. Their soles are naked in summer. 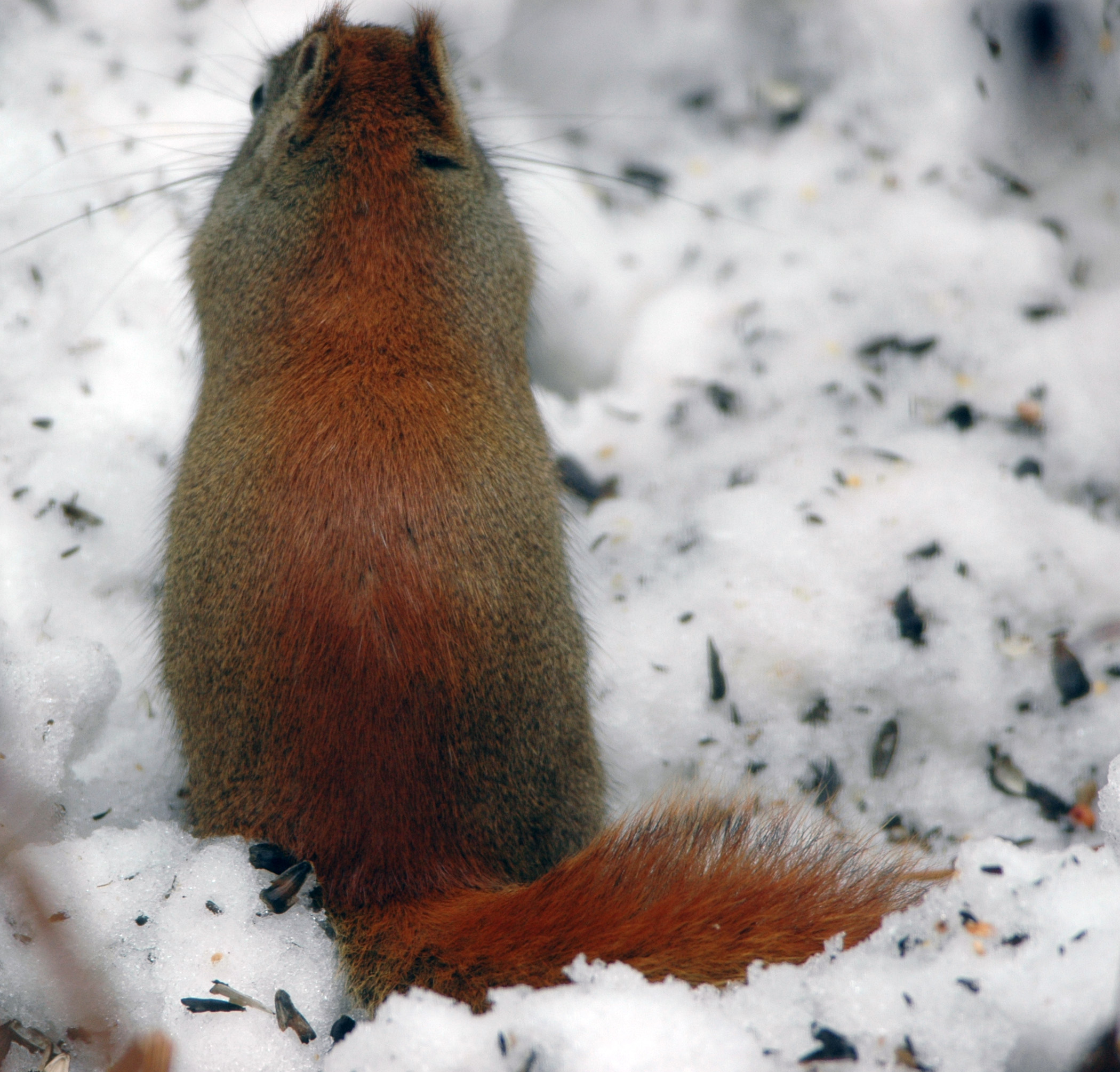 The red squirrel’s back and tail show the reddest parts of its winter pelage.

The black lateral line on the lower side of the body, generally separating the darker back from the whitish belly, is now concealed by the longer outer guard hairs.

Viewed from above, the red squirrel blends in perfectly with tree limbs, bark, the forest floor or even a stone wall. Viewed from below, the white or light gray outsides render the animal inconspicuous by the broken sky pattern of the forest floor. Their autumnal molt begins in early November and is complete by late December.

Their nests, including roosting spots used in winter, have been examined in detail and found to be very interesting. Occasionally these mischievous imps burrow underground, usually under a considerable pile of feeding midden. The midden in this area is most often spent scales and stalks of white spruce cones from which the squirrel has removed and eaten the seeds. I have found several mounds as high as six to eight inches and two to three feet across.

Abandoned flicker holes are frequently used as homes, but more commonly the nest appears to be a good-sized bundle of small sticks and leaves. Finely shredded material, such as cedar bark, is used as the warm insulating lining. The squirrels are known to even use a wad of this lining material as a plug, or door, which can be closed to keep out the cold. Their nests here at Houby Hill [the Lukes’s residence] are invariably built inside of brush piles.

Red squirrels do not hibernate. They are known on occasion, however, to remain in their nests for two to three days at a time when the temperature plunges well below zero and remains there. It is then that their caches of food are so valuable. Seeds, nuts, dried fruits and even dehydrated mushrooms help them survive the icy blasts of January and February.

Two mushrooms that scientists have learned red squirrels are most fond of are Amanita muscaria, the fly amanita, and Russula emetic, the “sickener.” The fly amanita is poisonous to people and the sickener does just what its name says. It has been recently discovered that squirrels have a lining in their stomachs that help dispel the toxins from these fungi. 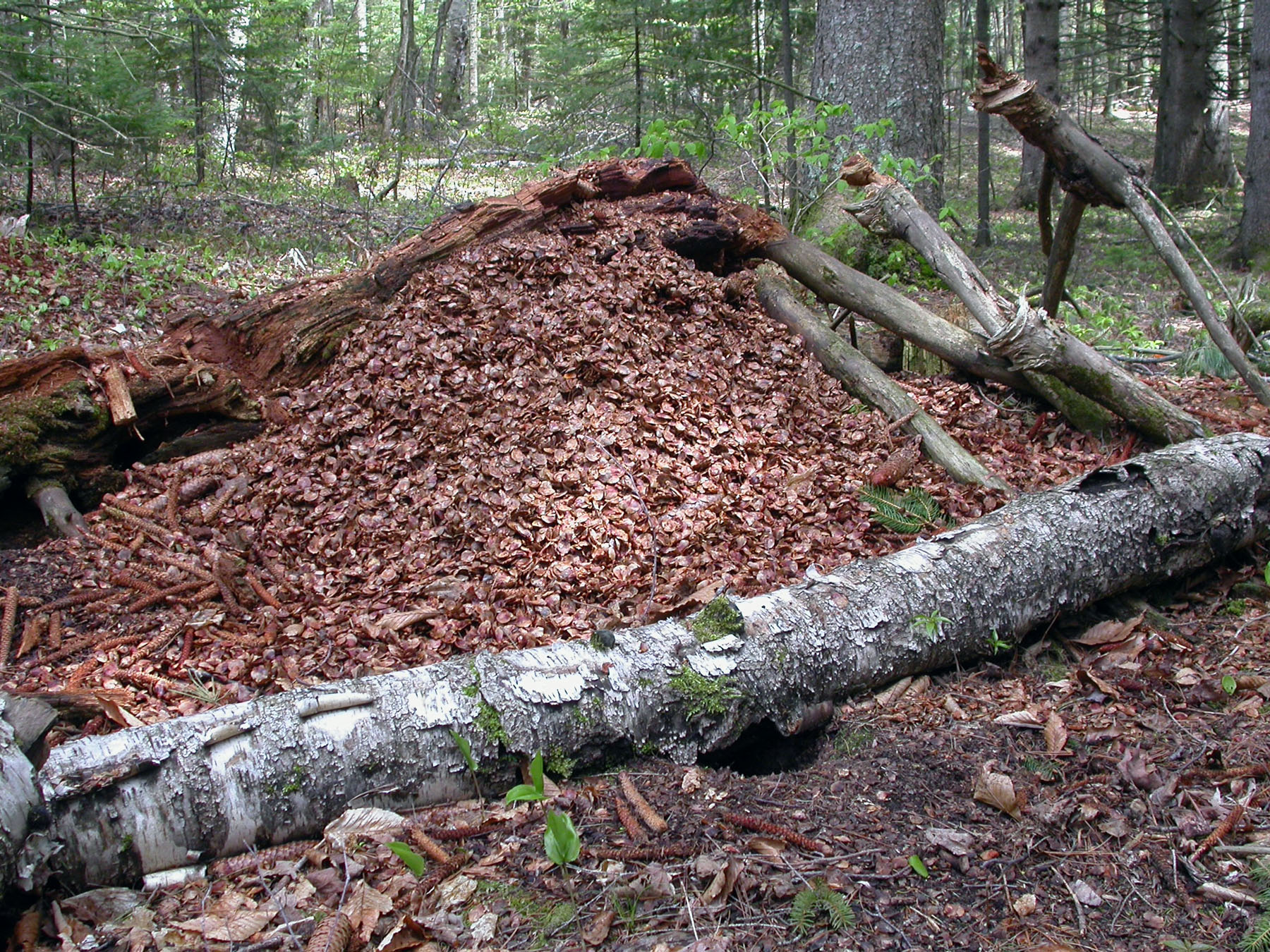 This midden pile found in Newport State Park was the biggest we have ever seen.

I’m convinced your earliest experiences with them play an important part in your admiration, or lack of it, for them, even though it can be very difficult to judge their true character. To some, Meeko is loaded with interest, initiative and feistiness. Others find it a thieving tyrant, impulsive, impudent and a general nuisance. Friends of ours who have had problems with this creature and his tribe getting into their attic and making a mess would be happy to see them magically disappear and never return.

Ernest Thompson Seton, one of my favorite nature writers and naturalists of years ago, made the claim, “The rodents are very low in the scale of intelligence, but the red squirrel ranks high in its class. It is gifted with a burning curiosity, which, tempered by prudence and aided by agility, is an excellent start on the road to knowledge.”

At least a half dozen gray squirrels and two red squirrels occupy our south woods and feed daily in our front yard on whatever has been scattered or has fallen to the ground from the squirrel-proof feeders above.

One of the greatest delights in observing these impetuous creatures, outside of marveling at their volleys of chatter, comes when they tunnel beneath the snow. I see no reason why red squirrels can’t have fun just as people do. In fact I am convinced they thoroughly love to “snow plow” through the soft fluffy drifts. Apparently they do not bring any snow to the surface when they make their tunnels but rather pack it against the walls.

Come spring, the honeycomb-like maze of chambers and tunnels, iced from constant use, resists melting and reveals the squirrels’ winter “subway system.”

This denizen of the northern forest, a lovable little leprechaun, known to charmingly and perpetually disregard all ordinary customs, will have again proved to be one of our favorite wintertime entertainers.