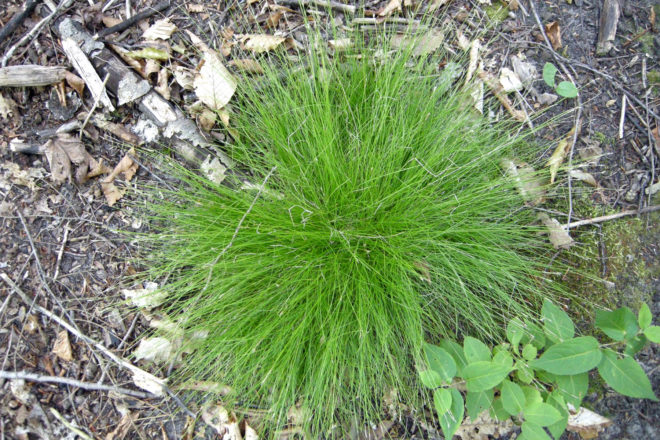 This sedge at White Cliff Fen has one of the narrowest leaves of any plant in Wisconsin. Photo by Roy Lukes.

One of the great joys of owning a piece of property is to get to know the plants intimately and to enjoy them often during all seasons. Our recent hikes along the glacial moraine east of our house revealed several of the largest and most beautiful patches of one of the widest-leaved sedges in Wisconsin that we’ve ever seen. Their vivid green color was in sharp contrast to the overall subdued nature of the forest floor that was being liberally blanketed with newly fallen tree leaves.

Unfortunately sedges in general, around 122 species in the state, have never attracted much attention in light of their extremely small and inconspicuous greenish flowers. As a result very few have taken on common names, including the wide-leaved species in our woods.

Its scientific name is Carex plantaginea (plan-ta-GIN-e-a), pronounced with a hard “g.” Two of its distinguishing features are:  noticeably red-purple basal sheaths and pleated leaf blades that resemble a widened drawn-out letter W.

For lack of a common name, I simply refer to it as the wide-leaved sedge even though there are a few other species scattered around the state that also have wide leaves. However, this species is among the very widest.

Another of our favorite sedges in eastern Wisconsin, often abundant in the company of eastern white cedars, is Carex eburnea (e-BUR-nee-a). What’s so amazing about this plant are its extremely narrow leaves. I recall Jim Zimmerman, a leading botanist friend from years ago, telling us that this plant may have the narrowest leaves of all Wisconsin plants; anywhere from one-tenth of a millimeter to one millimeter – and that’s narrow!

It was Jim who added a very important section, the sedge family, to the 1976 revision of Spring Flora of Wisconsin by Norman Fassett. This large and relatively difficult family includes four genera in our state, the cotton grasses (actually not grasses), spike rushes, bulrushes and sedges.

What slightly adds to the confusion of the study of the sedge family is that certain sedges are commonly called rushes, such as bulrushes, belonging to the genus Scirpus.

One of the most universally known sedges, Cyperus papyrus (si-PER-us pa-PY-rus), is also one of the tallest in the world, often growing to 10 feet. One of its uses stretches back into antiquity. Paper of the ancients was made of the pith of the flowering stems that first were split into fine sheets then laid side by side with their edges overlapping and, finally, overlaid crosswise with similar strips under pressure. Once dried, it provided those people with perhaps the world’s first paper. Some of the early boat building of that region also made use of the dried papyrus stems.

The sedge family, Cyperaceae (sip-eh-RAY-see-ee), is extremely widespread throughout much of the world. In fact the herbarium of the Royal Botanic Gardens at Kew, London, contains between 4,000 to 5,000 species. Many are valuable parts of wetland communities where they are common, while some have become first-class pests when invading various croplands, such as rice fields. One, Cyperus rotundus, has the reputation of being termed the world’s worst weed. There are several, including the creeping sedge, pointed broom sedge, tawny cotton grass and the yellow nutsedge, that are terribly aggressive and invasive weeds in the eyes of Wisconsin cranberry growers.

There is a very edible member of the sedge family that many of you enjoy, especially those who are fond of Asian food. It is the Chinese water chestnut, Eleocharis (el-e-OK-a-ris) dulcis (DUL-sis), a very important plant of Asia.

The most widely distributed sedge in our state is the Pennsylvania sedge, Carex pensylvanica. Go into just about any upland mixed hardwoods and you’ll see what appears to be a vast carpet of very fine-leaved grass growing to a height of around 6 to 8 inches.

Unfortunately the profusion of this sedge in the northern forests of the Midwest and the Northeast is directly related to the invasive earthworm. Its abundance indicates the area is home to these earthworms. We always thought worms were good in the garden but in our hardwoods they are eating up much of the humus needed for native plants to survive. What native earthworms may have existed here were gone with the glaciers. The invasive species were brought in from Europe years ago.

How does one tell a sedge from a grass in the first place? Very basically, a sedge plant has a triangular stem, at least at the bottom, which is also quite solid. Carefully twirl it between your fingertips and you will easily sense its three-sidedness. Look down upon a sedge plant from the top and you’ll notice its leaves are three-ranked. The leaves will be spaced roughly 120 degrees apart as they progress up the stem. Their leaf blades are often pleated, and the plants lack the hollow stems and nodes or joints of grasses.

Grasses have round hollow stems that also have small swellings, called nodes, to which its leaves are fastened, with one leaf per node. The leaves are flat, which is where some confusion enters the picture because of the flatness of many of the sedge leaves near their tips. By the way, rushes also have round stems but they are solid.