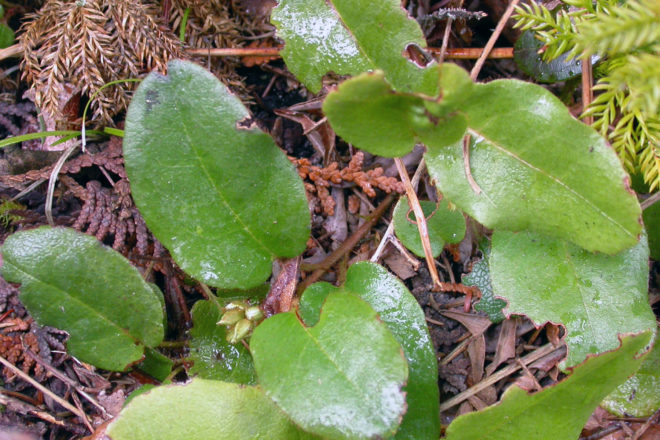 The tough leathery leaves of trailing arbutus are green all year long. A cluster of flower buds, which forms in autumn, can be seen along the stem at the lower left. Photo by Roy Lukes.

Search the world over and you will find only two species of trailing arbutus, one in Japan and the other in North America. Botanists, in their search for appropriate scientific names for flowers, chose Epigaea repens (ep-i-JEE-a REE-pens) for this favorite of favorites. Epigaea is Greek meaning “upon the earth,” while repens means “running on the ground.”

If you really wish to be technical the trailing arbutus is a shrub no matter how closely to the ground it grows. It belongs to the wonderful heath family and is grouped with bog rosemary, leatherleaf, wintergreen and bearberry. All of these are native to Wisconsin and especially to the Ridges Sanctuary.

The arbutus is a fussy plant to say the least. Shade; sandy, aerated, acid soil; and an affinity for being near evergreens are some of its requirements. In spite of its demanding needs it enjoys a wide distribution. People drink in its heady perfume each spring from Newfoundland to Saskatchewan and as far south as Florida. This widespread occurrence might lead one to imagine that these flowers are abundant. The fact is they are becoming more rare every year.

Their beautiful, waxy white to pink flowers coupled with their ambrosial fragrance has sadly led to their almost total disappearance from many sections of the original range. It was a fashionable custom for many years for people to decorate their homes with bowls and trays full of arbutus lacing the air with its heavenly aroma.

I wouldn’t put it past the Native Americans to have kneeled down each spring in this region, right about now, to fill their lungs over and over with the sweet, delicious fragrance of the trailing arbutus. And perhaps too, as I, they developed a spring ritual which took them, each to his own “private” garden, away from others where they would commune with the most secretly precious of all spirits known and understood only by you alone.

Little did these Native Americans realize, and as a matter of fact most present day Door Countyites, that here in an extraordinary little north pocket of wet shoreland at the Ridges Sanctuary existed a layer of some of the most unusual soil in the entire world, raw humus rendzina. And to think that only small similar soil areas can be found in Canada, Russia and the Swiss Alps! 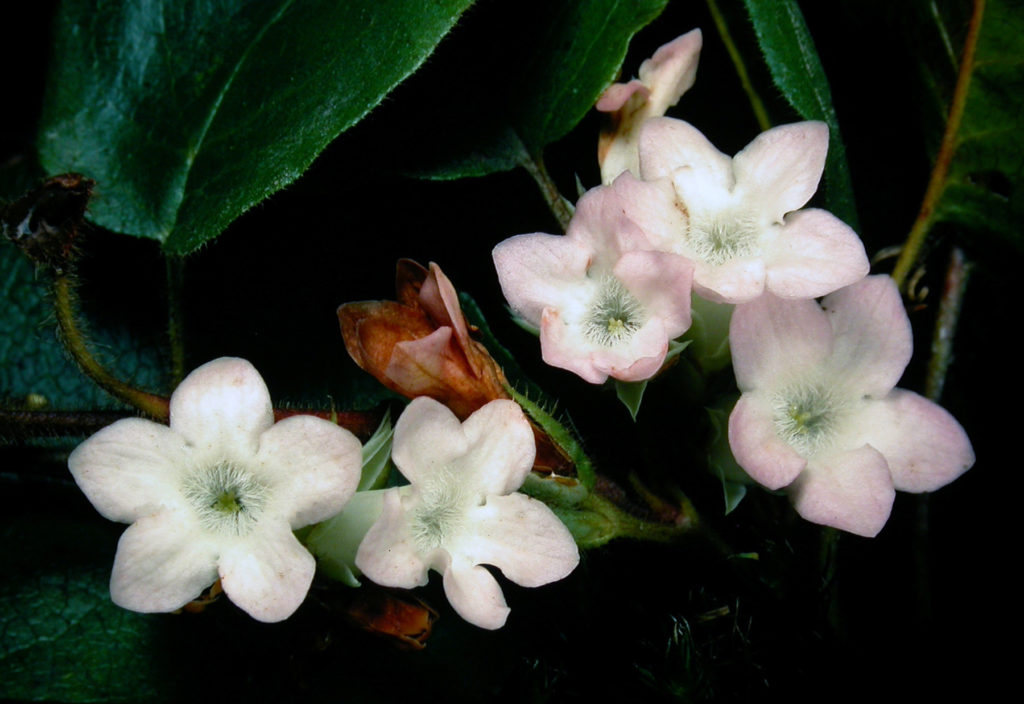 Flowers of trailing arbutus are a delicate pink and emit a wonderful fragrance. Photo by Roy Lukes.

Following the retreat of the last glacier nature provided this present-day outdoor museum with a several-inch layer of unincorporated weathered plant debris over a calcareous, or limestone, substratum. This general type of soil is not particularly unusual in the North Country, but there the underlying rock is granite. Years of dead evergreen material falling to the ground, accumulating, being acted upon by precipitation and weathering, have produced a highly acid soil. Here at the Ridges, with limestone (dolomite to be exact) underlying this comparable action, the result is an alkaline reaction instead of an acid reaction. The fact that the soil is referred to as “raw” humus simply means that it all had been made right here and that it was not transported from elsewhere as many of the other soils in the region.

Various plants such as the handsome Canada buffaloberry and Indian paintbrush, both partial to alkaline soil, are right at home here along with acid-loving plants that, too, find a place to thrive in highly acid soil. The extremely rare, small, round-leaved orchid (Orchis rotundifolia) now with a new genus, Galearis, finds to its liking little highly acid microclimates having a pH of 3.5 to 4. That’s roughly as acidic as vinegar!

What an amazing collection of plants ranging from the simple algae, fungi and lichens right up to the highly specialized orchids, and even some saprophytes such as the Indian pipe all grow here. Soil too poor for farming and too wet for human development, left to the intriguing processes of natural selection and succession here has produced one of the most remarkable botanical areas known to the entire world. And even though ravaging and selfish pressures (attributable to over-human-reproduction and technological development) pick away at its very boundaries relentlessly, here is one area where nature, helped along by a sizable group of intelligent, caring, dedicated people, will in the end be the victor!

Do whatever you can to help preserve these special places where relict plants still exist. It is of great importance that we learn how to appreciate and try to save the gradually disappearing rare plants and to teach future generations to maintain these ecologically vital environments.