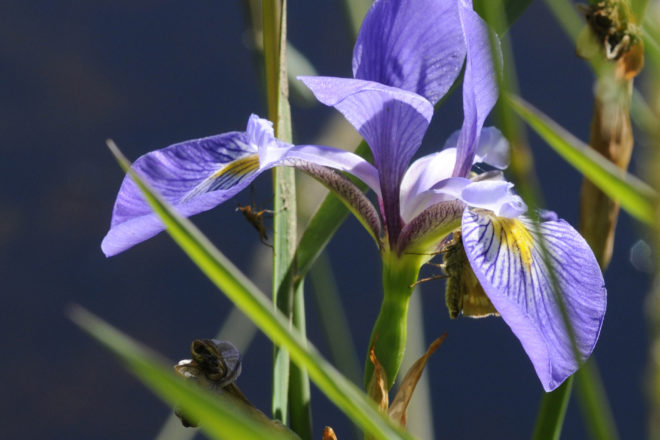 Flag Day is June 14, and many American flags fly all over the country on Independence Day. This is also the time of year when you can find beautiful natural flags – in the form of the blue flag iris – blooming in many wetlands. This tall, native flower inhabits quiet waters such as small streams, shallow lake edges and secluded marshes.

All plants are divided into two main groups: monocots and dicots. One clearly visible feature to examine to determine the difference is the veins of the leaves. Monocots – including the iris, lily and wild orchid families – have parallel-veined leaves. Dicots – the majority of other plants – have leaves with divided or branching veins.

These monocot and dicot names come from the seed leaves found in the embryonic first stage of growth. Monocots have one seed leaf and flowers in parts of three or six. Dicots have two seed leaves, and those flowers are in parts of four or five or sometimes more.

I grew up in Milwaukee, where the extent of my nature education was to learn the state bird, flower and tree. When I moved to Baileys Harbor 50 years ago, I tried to learn about flowers, but if they weren’t blooming, I wasn’t interested.

Then I learned to use Newcomb’s Wildflower Guide by Lawrence Newcomb. It taught me to look at plants with a keen eye for features other than the blossom. I could examine the plant structure, leaf forms and seed pods to learn a great deal about plants, even when they were not blooming.

This book is based on determining three classifications of the plant you want to identify. The first is to look at the flower type, then the plant type and finally the leaf type. The book also has many aids to help you in deciding how to work with the master key.

The iris family is rather small, but it does have three genera here in Door County that are quite limited in their distribution. The dwarf lake iris, Iris lacustris (la-KUS-tris), grows in The Ridges Sanctuary, in several other shoreline areas in Northern Door and on Washington Island. It is considered a federally threatened plant because of its very limited locations in the United States.

Flowers in the iris group have large, colorful sepals that one might think are petals. The three large, outer parts – the sepals – may be deep to pale blue, and the three smaller, inner parts that are erect are the actual petals.

Another small, low-growing member of the family is the crested iris, a more southern species. We saw it in the Carolina mountains during a trip there in 2011.

Northern blue flag iris plants are usually found in wetlands or damp meadows. They do grow in water, but only if it is fewer than three feet in depth. This iris prefers sandy, loamy soil and can grow to a height of three feet. Its large flowers are deep blue with yellow veins, and they’re about four inches wide. It is most common in the northern two-thirds of our state.

A similar flower, the Virginia blue flag iris, is more common in the southern two-thirds of Wisconsin and can form colonies in sunny, wet meadows or along small rivers. Its flowers are lighter blue, and the plants are only one to three feet tall. Both of these species have been found in Door County.

One often-overlooked member of this family grows prolifically along some roadsides in country areas and blooms in early June. It’s called blue-eyed grass. We found some along the upland trail at Door County Land Trust’s Kangaroo Lake Nature Preserve. The plants have very thin, flat stems, and the flower is only about an inch wide.

Scientific names are sometimes quite elaborate for such a tiny plant that stands only eight to 10 inches tall and has very flat, thin leaves clasping the stem. Mountain and prairie blue-eyed grass are both found in Door County. The genus is Sisyrinchium (sis-eh-RINK-ee-um) – a name that’s almost as long as the plant is tall.

There is one member of this family that has been introduced and is possibly invasive: the yellow flag or water iris. The plants get nearly three feet tall and are usually found growing in water.

Here is another reason to help protect the precious wild marshlands: Gorgeous blue flag irises will continue to bloom only with our support of wetland preservation.