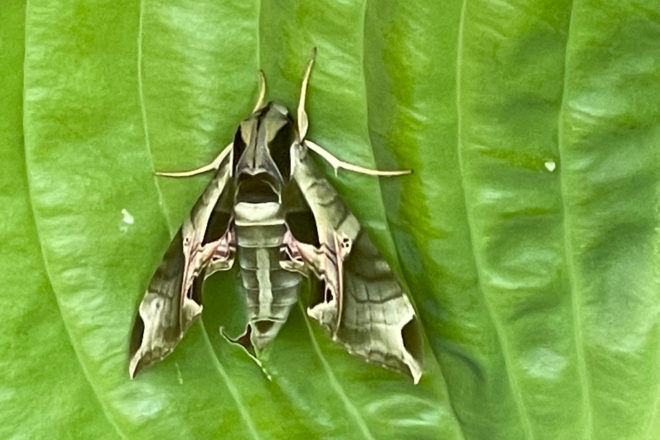 It was late August 2002 when my late husband, Roy, was using his first digital camera while photographing an unusual caterpillar. The creature was feasting on wild grape leaves, which are abundant here in Door County.

After doing some research, we learned that the caterpillar was the pandorus sphinx, a very large, strange-looking creature. Most sphinx larvae have big heads with strong jaws, are formidable chewers and grow more rapidly than others in their category.

A friend sent me a picture of a moth she’d photographed on July Fourth and wanted it identified. I had never seen one like it, but thankfully, another good friend was able to tell me its name. Finally, after nearly 19 years, I got to see a pandorus sphinx moth photo!

Many people are familiar with butterflies because they’re active during the day and are quite beautiful in their many forms and colors. The monarch is perhaps the most well known. It is the largest of the migrating species, with a wingspan of 3.5-4.5 inches, and it has been the object of North American conservation efforts for quite a few years.

The painted lady is a worldwide species that also migrates, with our populations spending the winter in the southwestern U.S. and Mexico. It has a wingspan of a little more than two inches and is very similar to the American lady butterfly.

Moths are generally not as positively perceived as butterflies. They usually fly around at night, are small and tend to be more drab, plus some such as clothes moths have a bad reputation for destroying humans’ possessions.

One feature is distinct about both moths and butterflies: They are the only insects with wings that are covered with scales. Their scientific order name is Lepidoptera. “Lepis” is Greek for “scale,” and “pteron” means “wing.”

The basic observable difference about these two groups is their antennae. Butterfly antennae are thin and smooth with a knob at the end. Moths have antennae that are plumed, saw-toothed or brushlike.

Some of the most beautiful moths are in the group known as giant silkworms, and many have large “eye spots” on their wings that mimic owls or animals. That feature may help to ward off predators during their short life spans of mid-May to early July.

This family has more than 1,300 species worldwide, with most of them observed in the tropics. Nearly 80 species can be found in North America, but only about a dozen are in Wisconsin. None of the adult moths feed; their only function is to mate and reproduce.

The giant silkworm family includes the cecropia, Io, luna, polyphemus and promethea species, which are some of the more well-known members. Their wingspan can be up to six inches. They do not fly during the day, so they may be visible only at dawn if an outdoor light has been left on all night.

Caterpillars in the silkworm clan are large, chunky and adorned with formidable spines or stinging hairs, which act as a visual defense or may even inflict pain on anything that tries to eat them.

The other group of large caterpillars includes the sphinx moths, or hawk moths, which are mostly out and about at dawn or dusk, but some are seen during the day. Clearwing moths hover as they collect nectar from flowers and are often mistaken for hummingbirds or bumblebees. Hawk moths number 1,100 species in the world, with about 130 in North America. Some have wing spans of up to seven inches, as well as long lives, compared to silkworm moths.

Some sphinx moths are drab and blend in with tree bark, but others have bright pink in the underwings. We found one that fed on the grape jelly that we put into orange halves on our feeders for the Baltimore orioles. It appears that some of them have a “sweet tooth,” or proboscis!

Those of you who grow tomatoes may have encountered the tomato hornworm: a fat, green caterpillar of the tomato sphinx moth. They feast on tomato plant leaves, reach three inches or more in length, crawl to the ground, then dig their way into the soil to immediately pupate. The next summer, they will emerge as adult tomato or five-spotted sphinx moths.

If you have disturbed one of these tomato hornworms by picking it off your tomato plants, it may have reared its head up, looking for all the world like a miniature Egyptian sphinx – and hence its name!