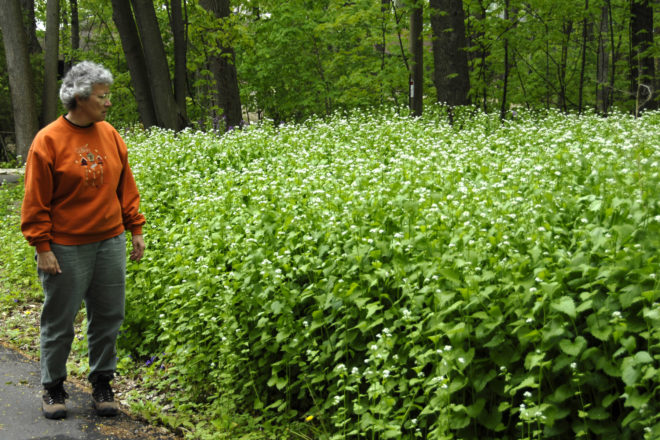 Charlotte Lukes stands next to a severe invasion of second-year garlic mustard plants photographed on May 15, 2007. Photo by Roy Lukes.

Strong southwest winds are blowing today and this first day of May is the warmest one of spring, a season we thought would never arrive. I’ve lived up here in northern Door County for nearly 46 years and this was the coldest, snowiest and latest spring I ever experienced.

The dry brown woodlands are finally showing the wonderful green of wild leek leaves. The first hepatica blossoms came into bloom a week ago and, according to my records, are about two weeks later than normal.

One plant that is quick to appear in May is the terrible invasive garlic mustard. Second-year plants flower very early and go to seed just as rapidly. The plant, a biennial herb, is a two-year species imported from Europe. As it gains a foothold in a woodland it can gradually crowd out most of the small native plants. In fact it is so highly competitive that it is even capable of disrupting tree reproduction – and that’s serious. Learned botanists and ecologists refer to it as a disastrous invader.

The black cylindrical seeds are very tiny, a bit less than ⅛ -inch long, and are easily transported in the muddy tread of tires, cleated hiking shoes, matted in the muddy feet of wildlife or pets or in the droppings of birds. Plants are often found growing in campgrounds where they were brought in on the undersides of tents or in foot mats outside campers’ RVs. 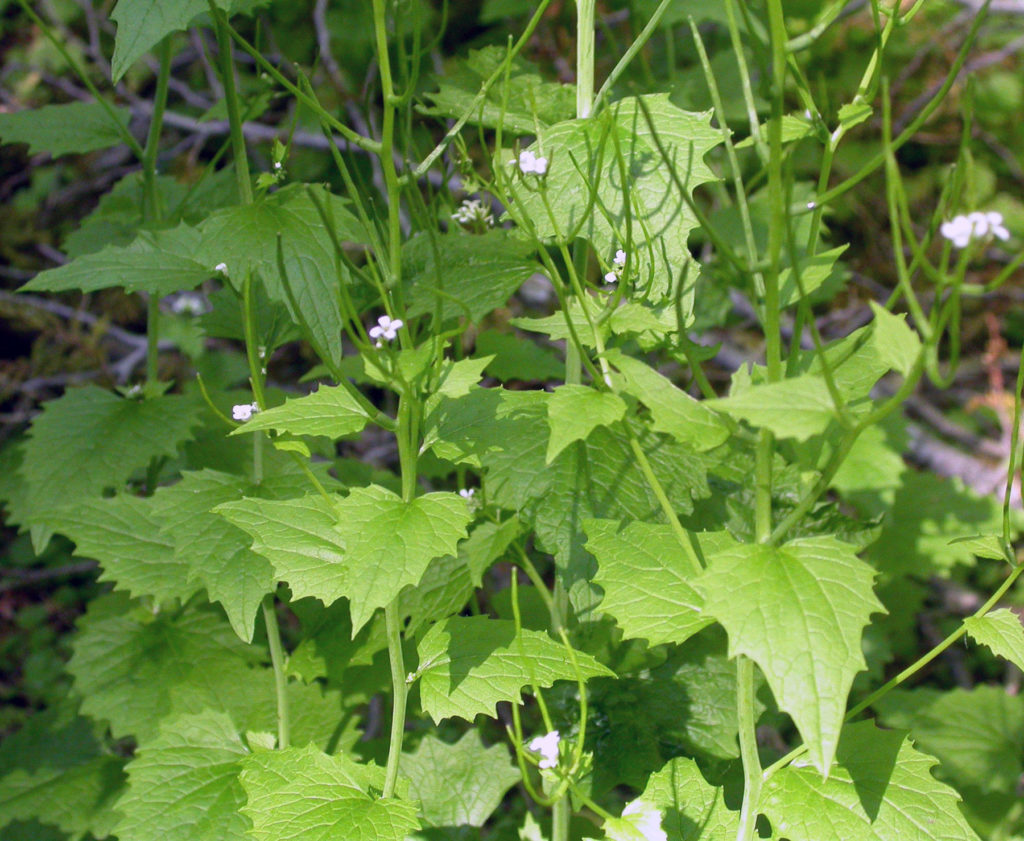 Garlic mustard plants can grow very close together and become quite tall. Photo by Roy Lukes.

It was in 1868 that the very first garlic mustard plants were documented in Long Island, New York. Plants were also found in Toronto, Canada, by 1879 and by 1950 were discovered thriving in 14 states in the northeastern part of the U.S. By 1990 it was growing in 27 midwestern and northeastern states, the District of Columbia, Oregon and Utah.

Even though this insidious plant has been found as far south as Georgia and westward to the Pacific Northwest, the heaviest infestations are located in the Midwest:  Wisconsin, Illinois, Indiana, Ohio and Michigan.

One only has to talk with people from southern Wisconsin and northern Illinois to learn how, in just a dozen years, garlic mustard can overtake and literally carpet an entire woods that once held thousands of trilliums and other native wildflowers.

There is widespread concern today about the radically decreasing biological diversity of the native plants and animals of our nation. Few of the more than 350 alien plant invaders of our region will reduce the all-important biological diversity faster than garlic mustard.

Bear in mind that, as native plants disappear, so do many insect and bird species that are vitally dependent upon the plants. Butterflies and moths, for example, often have very specific plants upon which their larvae feed. Remove these plants from the landscape and you automatically remove the moths and butterflies as well.

Several factors make garlic mustard an extremely difficult plant to eradicate. In the first place it is a biennial with small, oval, scalloped-edged first year leaves that are easy to overlook. They form low-growing rosettes that remain green throughout the winter.

By the second spring the plants will have built up ready-made strength to quickly develop into strong two- to four-foot tall, rapidly growing stalks that can quickly rob the native plants of water, nutrients and sunlight.

The second-year foliage is considerably larger and triangular-shaped and also has strongly scalloped edges. These leaves can be from two to six inches long.

Both the leaves and the stems emit a strong garlic odor when crushed. The plants have small, white, four-parted flowers, typical of the mustard family, that eventually develop long, thin seed pods. It is assumed that the flowers are self-pollinated, but they are also cross-pollinated by many small insects such as midges, bees and Syrphid flies, known as flower flies or hover flies. A single plant is capable of populating an entire site. 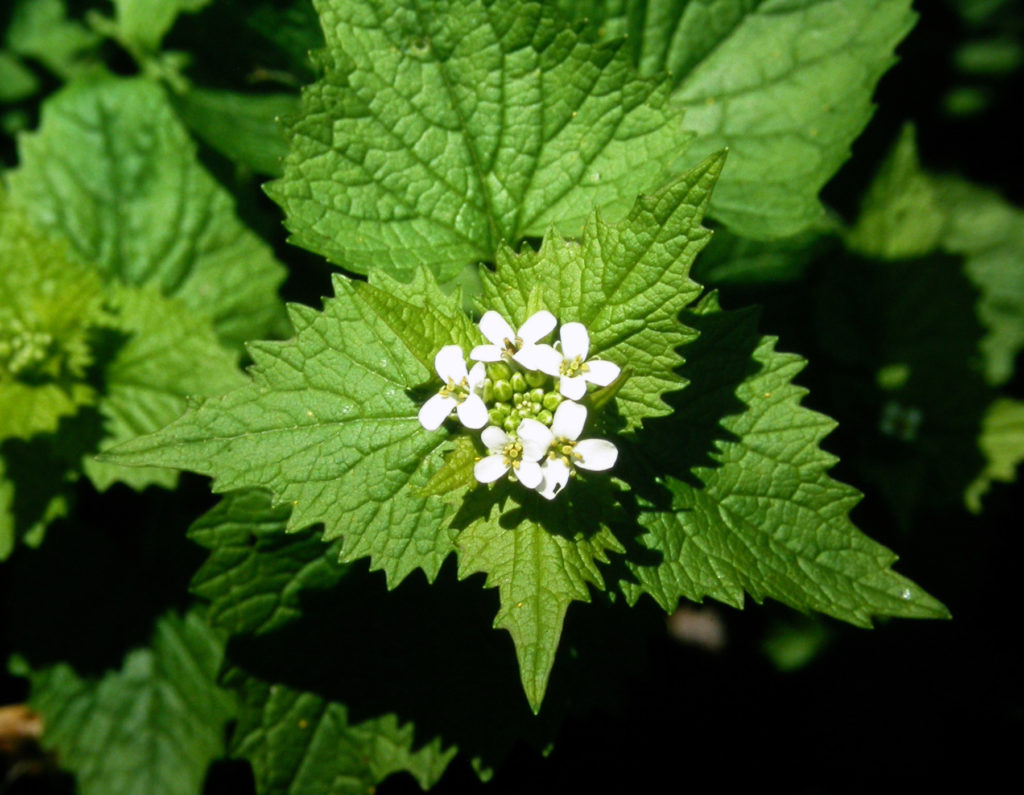 A close view shows the small four-parted flowers and the scalloped leaves of garlic mustard. Photo by Roy Lukes.

Being an unusually hardy plant, it can tolerate full sun to full shade. It will, however, do best in moist, partially shaded soil. Maple-beech hardwoods with small openings, especially where the soil is on the limey side, are particularly to its liking.

A characteristic of garlic mustard that makes its eradication so difficult is one plant is capable of producing 500 to 800 infinitesimally small seeds. One square meter of ground surface can support upwards of 20,000 seedlings, of which 2 percent to 4 percent can survive to flower the following spring. That still amounts to as many as 800 plants per square meter, about 9 square feet. Also contributing to the success and wildfire-like spread of this plant is the fact that its seeds may lie dormant in the soil for up to seven years before germinating.

In other words, once you discover a patch of garlic mustard plants growing on your property, you may have to religiously do battle with them for seven years before you will have completely conquered them.

Both first- and second-year plants must be pulled up by their S-shaped roots. Naturally, whenever you pull a plant up by its roots, you disturb the soil and invariably plant other seeds that were lying on the surface, tiny garlic mustard seeds included. If possible, try to remove the plants before they develop seeds.

Dispose of the plants by drying and burning them or putting them in garbage bags. The use of herbicides and controlled burning has met with some success, but both must be done with extreme caution and at the proper time in order to not jeopardize nearby native plants.

Of absolute vital importance is that all land owners regularly and annually check their entire properties for garlic mustard plants now and throughout the growing season and immediately begin eradicating the plants.

Scour your property religiously now and into early summer destroying the young second-year plants, or later the taller flowering plants. Your efforts will be rewarded by the spring woods being carpeted with exquisite native wildflowers.

Get to know the native plants that will thrive in your area to help native birds, butterflies and moths. Check out your local Wild Ones group for help in selecting these plants and include them in your landscaping. It is a good way to help our biological diversity!