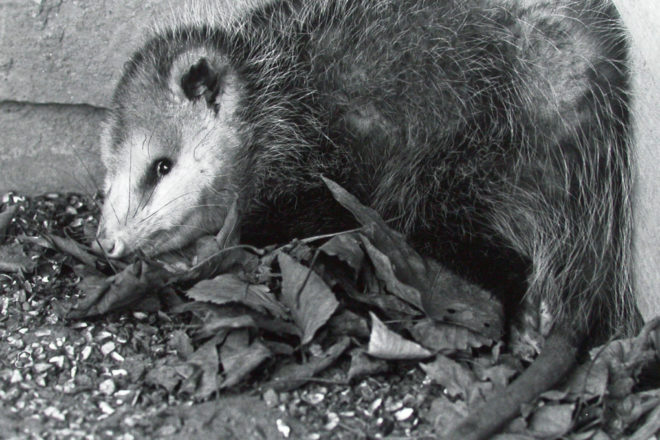 An opossum is trapped in the corner of our house foundation. Photo by Roy Lukes.

This strange winter weather of the past month has made finding food difficult for the local squirrel population. December brought 20 inches of snow to my upland hardwood area. The first 16 inches melted back to bare ground, and then the last few inches were covered by freezing rain. The ice-covered ground makes it hard for squirrels to find any fallen acorns that might still be available from the oak trees.

I now count 12 gray squirrels and five red squirrels looking for food under the bird feeders. The ice is slow to melt on days when temperatures barely reach 20 degrees and the sun is so low in the southern sky.

Each morning, I scatter cracked corn and millet seed for these hungry creatures and for the juncos that often feed on the ground. Blue jays and cardinals also enjoy the corn. I sometimes see red stains on the snow because several gray squirrels fight each other for the food and may be drawing blood.

Bushy-tailed animals also glean seeds dropped from the high platform feeders and other hanging feeders that hold suet and hulled sunflower seeds. Last year, one interloper gray squirrel that came from the south would jump from trees and land on the big platform feeder. I had a tree-trimming company remove some branches, and that solved the problem.

Years ago, we used to have ruffed grouse in our woods. We would watch the aspen trees near our home during the winter to see the silhouette of the large bird at sunset as it nibbled the buds on the high, upper branches. The grouse also enjoyed the cracked corn we scattered on the driveway.

During heavy-snow winters, ruffed grouse would sometimes dive deep into the snow for protection against harsh, nighttime winds. If freezing rain fell during these times, it might trap the grouse inside because they could not break through in the morning.

Ice-covered snow can also make it difficult for wild turkeys to find food. They’re known for their great scratching ability to unearth acorns and other wild foods from the ground. Cut-over cornfields are another place where these birds search for leftover kernels.

I used to see the meandering trails of meadow voles in the thin layer of snow and would glimpse short-tailed shrews scampering from snowbank to snowbank near the feeders in search of tiny bits of food. This solid ice coating deters that sort of activity as well.

Extreme cold causes some birds to find shelter in nest boxes or sections of a hollow tree. Each morning when I walk out to the feeders at dawn, it amazes me that wild creatures can survive this weather. I say to myself, “I’m so glad that I have a warm house to live in.”

Skunks are short winter sleepers and not true hibernators, but they find shelter for a few months in a dry, frost-free den. Like badgers and raccoons, their body temperature drops several degrees, so they become mentally groggy and slower than usual in their movements. A mid-January thaw may lure them out briefly in search of food near bird feeders.

One animal that has been here for 50 years is the opossum. This species, native to Virginia, has moved north over the years and was first reported in the Sturgeon Bay area in 1972. They do not hibernate and must eat every day to survive. They are the only native marsupial, and, like koalas and kangaroos, have a pouch to nurse the newborn. They have 50 teeth – more than any other native mammal – and can grasp branches with their prehensile tail.

My late husband, Roy, photographed one in our yard during the winter and noticed that the end of its naked, pink tail skin was frozen off, revealing the bony center. Opossums have a great sense of smell but poor eyesight, and they often play dead when threatened. The phrase “playing possum” refers to this activity, in which they just fall over and lie still. That often makes predators less interested.

Some people think opossums are dumb, but studies have shown that they’re smarter than originally thought. They can climb trees and are mostly nocturnal, which is why they’re not seen very often. Therefore, there may be more of them in the county than we realize. They prove that to survive in the wild, adaptability is sometimes more important than intelligence.