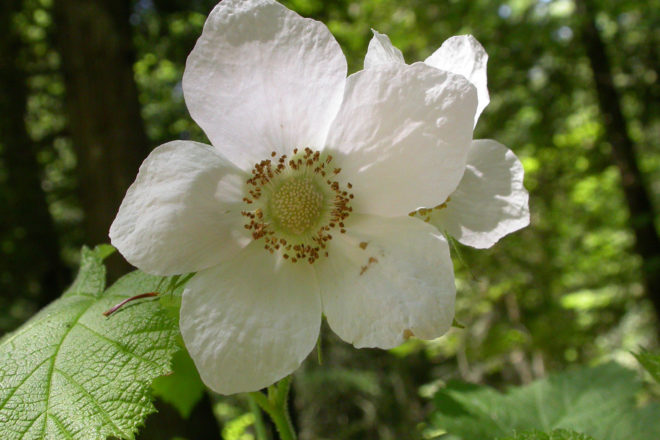 The large, showy, tissue-paper-like blossom of thimbleberry lights up the wooded path. Photo by Roy Lukes.

I remember the very dry summer of 1976. One August morning, I ventured out to pick some thimbleberries. I had an old ice cream bucket with me in which to collect them and carefully stepped over fallen trees to reach some of the fruit.

After about an hour of picking, with only one layer of berries in the pail, I suddenly realized it was time to get home for lunch. I sought the quickest way back to my car, and in the process, I tripped over a rock and fell, dumping my entire collection of berries on the ground.

There are many white-flowered plants in bloom during the last half of June, including the Canada anemone, Canada dogwood, highbush cranberry, oxeye daisy and red dogwood. None is as showy, however, as the broad, tissue-paper-like petals of the thimbleberry.

It is in the Rubus (ROO-bus) genus, named after the Latin word “ruber,” meaning “red.” This is a large group of 205 species, including a small number of raspberries and blackberries. These have canes with many thorns, making the picker very respectful of the way they can penetrate pants. In contrast, thimbleberries, Rubus parviflorus (par-vi-FLO-rus), have smooth stems and branches, along with unusually large, velvety, maple-like leaves.

The thimbleberry’s species name, parviflorus, means “small-flowered” and is rather poorly chosen because this plant’s blossoms can be quite large – nearly the size of a silver dollar. They’re usually in full bloom by the middle of June.

Thimbleberries’ handsome, textured, maple-like leaves are slightly tacky to the touch and impart a clean, subtle perfume to the surrounding air. This would be my idea of the perfect scent for a can of air freshener: clean and invigorating, but not overpowering or artificial.

What a pleasure it is to walk carefully through a patch of thimbleberries as you pick the fruit: There are no thorns! You don’t have to wear a suit of armor, as when picking blackberries and you really earn every berry you pick.

Do prepare for some slow pail-filling, though, when you go in search of thimbleberries. It’s a good idea to line your pail first with several large leaves to cushion the delicate fruit as you drop it in. Walk slowly and carefully because the large leaves tend to hide fallen branches and rocks.

Thimbleberry plants thrive in the cool moisture of the Lake Michigan area, so they can be found throughout much of eastern Door County, all the way to Rock Island. The same climate exists in Michigan’s Upper Peninsula and in certain elevations of the Rocky Mountain region.

The extremely tart thimbleberries usually ripen in early August and make for extraordinarily delectable jam. Emma Toft made her jam by carefully picking clean berries, combining them with an equal measure of sugar in a large pot, and bringing the mixture to the boiling point, stirring well. She then spooned it into sterilized jars and sealed them. No pectin was added because there’s enough natural pectin in the fruit, which creates a soft, spreadable jam.

The luscious fruits need regular rainfall to form, then sunny days to help them turn bright red by early August. Many locations where these plants grow can be rocky with thin soil, so that’s why the regular rainfall is important.

It was during the first years of married life with my late husband, Roy, when we enjoyed walks on Rock Island when it became a state park. Roy presented a free program for the Washington Island Art and Nature Center each August, and one year, we stayed overnight. The next day held an adventure to a place I’d never been.

We seemed to be the only people on Rock Island as we walked along its trails. I said to Roy, “I feel like we’re in the story of Robinson Crusoe” as we nibbled on wild raspberries and thimbleberries along many of the paths.

Enjoy the thimbleberries’ showy blossoms now, and pick some when August arrives to savor their tart, juicy flavor. But walk carefully so you don’t spill your pail!