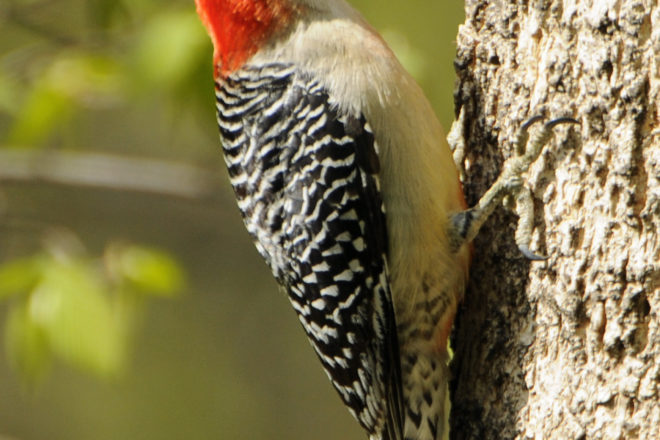 I have six feeding stations in the front yard that are getting lots of activity now that the land is snow covered and the air is cold. The feeders offer black-oil sunflower seeds, hulled sunflower seeds, dried cracked corn, millet seeds, shelled peanuts, suet cakes and marvel meal.

The view from my second floor allows me to see all of the feeders at once, as well as many of the leafless deciduous trees and some of the areas below the feeders. Ground-feeding birds are the first to arrive well before sunrise and include American tree sparrows, juncos, mourning doves and a couple of cardinals.

Four woodpecker species are common here in the winter. They are, from smallest to biggest, the downy, which is 5.75 inches long; hairy, 7.5 inches; red-bellied, 8.5 inches; and the 15-inch pileated. Unlike the chickadee and blue jay, it’s easy to identify males and females among these woodpeckers.

Female downy and hairy woodpeckers have black and white feathers with no red at all. Males of these species have red at the back of the head. The downy’s red is usually a solid patch, while the patch of the hairy is frequently two patches divided by a vertical black line in the center.

These should not be confused with the red-headed woodpecker. That species has a completely red head, which includes the cheeks and down the front of the neck to the top of the breast. Its back is black above with solid white in the wings.

Pileated woodpeckers have a red crest, with the males’ red going all the way to the top of the beak, and the females having a gray or black forehead and only the crest being red. If you can clearly see the cheek, you will find that the female has black within the white, and the male has a red horizontal band within the white.

Downys are usually the first to arrive, knowing that they must give in to the larger woodpeckers. The hairy woodpeckers are soon pushed off the suet feeders by the red-bellied, and then the pileated woodpeckers are the strongest contenders, but also the most wary.

There have been regular visits by sharp-shinned hawks and the larger Cooper’s hawk, both of which zoom in to snatch any songbird they can see moving about. When most of the smaller birds fly away in a big flurry and the few that remain sit completely motionless, I know there’s a hawk nearby. Predators watch for movement and fly rapidly in pursuit. If the small birds stay completely still, the hawk does not see them, and they may remain that way for long periods of time, until other birds return to the feeders, giving the “all clear” signal.

Hawks hunt by day, and owls hunt at night. I think that’s why cardinals like to feed at dawn and dusk – it seems to be a safe time with fewer predators. That may also be why there are so many small birds eating the scattered corn and millet on the ground before dawn.

Dark-eyed juncos arrive from the north and stay until April. They’re totally gray above with white bellies, so they can be camouflaged well in the dim light before dawn. These sparrows breed in far-northern states, throughout most of Canada and into Alaska. They are found all year in the mountains of the western U.S. and spend the winter in much of our country. They were confirmed nesting in nine far-northern Wisconsin counties during the first years of work on the Atlas of Breeding Birds.

American goldfinches are here all year and have dull tan plumage during the winter. By late March into April, the males begin to show the bright-yellow feathers that are so well known during the summer. Their numbers have been very high at bird feeders and are often accompanied by pine siskins and a few redpolls. The siskins have finely streaked plumage, and males show more yellow in the wings. They are small, feisty birds that are aggressive at the hulled feeder.

Other species here this winter include a few redpolls, which look streaked like siskins but have a small red patch on the forehead, as well as some purple finches. My late husband, Roy, used to do federally licensed bird banding and learned that not all brown purple finches are females. It takes up to two years for males to develop rosy pink feathers, so the brown ones you see now could be pink by next winter, into their second year.

It is fun to feed these hardy birds and watch them from our warm homes. You will see a change in species visiting your feeders within the next month as spring gets closer.