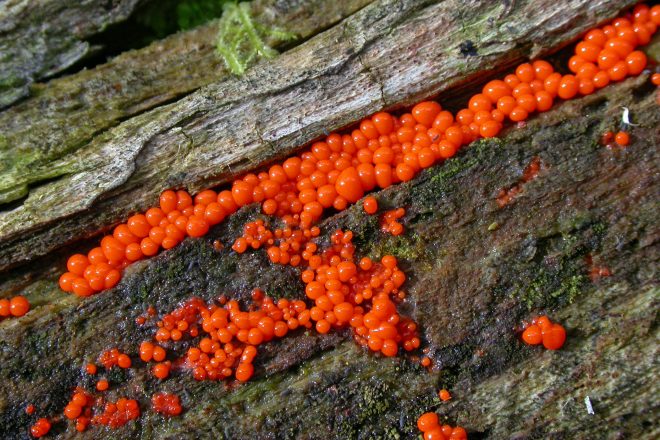 After several rain-filled weeks, we walked in a nearby woodland and saw strange growths on a dead, soggy, barkless, fallen log. Some people might walk right by and not even notice the small, spongy coating on parts of the bare wood.

The unusual growths were slime molds. They used to be classed with fungi and mushrooms, but they are now considered to be in their own phylum. They grow in a very different manner, starting life as protoplasm, and they are able to move over the surface of their host, ingesting nutrients as they travel.

The objects that these slime mosses cover can be the surfaces of dead logs that have lost their bark, dead leaves, grass or mulch in gardens, and they thrive during very wet weather.

Some mold species begin as a gelatinous form called plasmodium, which can propel itself in a streaming path of expansion and contraction, so here is where the members of this kingdom can be considered a third world: They are neither plant nor animal, but a combination of both. They can travel like animals do, but they act like plants.

This early stage of growth may be easy to see, or it might be hidden under leaves, bark or wood. The mold species are slimy only when they first emerge. Then they quickly change shape, texture and color as they develop into their spore-dispersal forms – activity that can all take place within a 24-hour period. The fascinating thing about studying slime molds is observing this quick change from plasmodium to spore-bearing forms.

Slime mold is often called the Jekyll and Hyde of the natural world because the rapid transformation is so complete that you may recognize a certain species during its first stage of development but not know it at another.

These strange molds are classified into two major groups, depending on where spores are produced: externally or in a type of spore case. They thrive with moisture, especially in the spring and fall during times of high precipitation and moderate temperatures.

These spore cases can appear in one of three systems. One called plasmodiocarps is a curving network or simple, wormlike form similar to the plasmodial strands from which they arise. The second type, called aethalia, forms small domes, and each one encloses its mass of spores under a protective layer that can be smooth or pitted. The third type, called sporangia, includes stalked and unstalked structures that are very tiny.

This is the best stage at which to attempt species identification, especially using a compound-lens microscope. We found a colony of Ceratiomyxa fruticulosa (sir-at-ee-o-MIX-a fru-tik-u-LOW-sa) growing on well-decayed wood on Rock Island in September of 2010. It looked like miniature white sea coral.

Estimates put the number of slime-mold species at 900 worldwide. I have identified species in eight genera in Door County during the past 45 years, and because of their very brief lifespan, it is magical to actually see them in fresh growth.

Some are more common than others. One forms small domes on rotten wood, and if you poke a stick into a dome when it’s fresh, you will see a pink, thick liquid ooze out of it. That one – called toothpaste slime – can stay on the log well into dry weather. Then it becomes brown and hard and somewhat dried up.

Another damp-weather type – called scrambled-egg slime – can be rather large, yellow and mound-shaped, with a rough surface. As it ages, the color changes to brown and looks quite different from the fresh stage.

A strikingly beautiful slime mold, Hemitrichia calyculata (hem-ee-TRIK-ee-a ka-lik-u-LAY-ta) – which we call red-ball slime mold – is a gorgeous red to red-orange in its early stage. It can grow in a huge mass covering many inches of a rotting log. The dozens of tiny, shiny red structures are held up on mini stalks and are best appreciated by looking at them magnified through a 10-power hand lens.

As they change from the plasmodial stage to the spore-bearing stage, they turn brown. Soon, out pop tiny, fuzzy, yellow balls on thin stalks. The balls then disperse the spores, and the slime mold can start a new colony.

It is comforting to know that species names are the same all over the world. One of my favorite websites is from New Zealand, and it covers many intricate forms of life. Visit hiddenforest.co.nz/slime/index.htm to see some spectacular, ultra-close-up slime-mold photography!