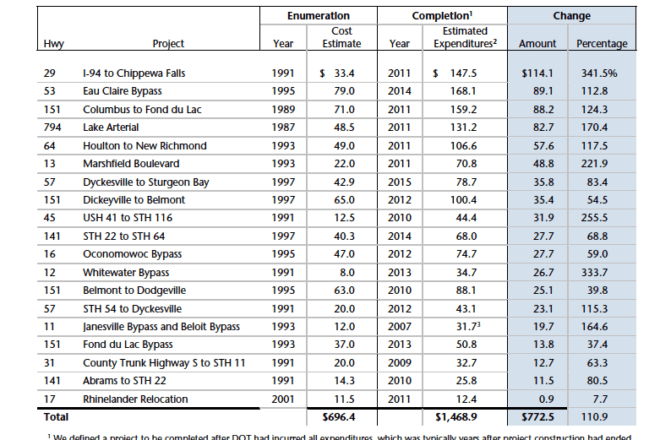 Massive cost overruns and highways in worse shape than six other Midwestern states are just a few of the problems identified within the Wisconsin Department of Transportation’s highway program in a report released last week by the Legislative Audit Bureau.

The auditors looked at 19 major highway projects completed from January 2006 to December 2015, and found that the projects cost $772.5 million more than first enumerated by the DOT. That includes a section of Hwy. 57 from Dyckesville to Sturgeon Bay that in 1997 was estimated to cost $42.9 million, but turned out upon completion in 2015 to cost $78.7 million, or 83.4 percent more than first reported.

The co-chairs of the Joint Legislative Audit Committee – Sen. Robert Cowles and Rep. Samantha Kerkman – announced in July 2015 that they had requested an audit of the DOT’s highway program.

“The audit would review a number of areas within the highway program focusing on finding potential waste, increasing public safety on Wisconsin’s highways and compliance with state and federal standards,” the co-chairs stated in a July 2015 press release. “In addition to evaluating DOT’s ongoing management of the state highway program, the audit likely will address DOT’s processes for planning, designing, and constructing road projects.”

The press release also pointed out that a number of major concerns were brought out in the last audit of the highway program, which was conducted in 2003. Issues were found with financial record keeping, the increasing reliance on bond proceeds to fund projects, and meeting financial reporting requirements.

“The findings of the report are disturbing and must be addressed,” said State Representative Joel Kitchens (R-Sturgeon Bay), in a news release issued after the report was unveiled. “The department has chronically underestimated the true costs of projects and not taken into account the increase in costs when project delays occur. We must do a better job of budgeting for our highway projects and then we must live within those budgets.”

Kitchens also pointed out that while the report identified potential savings in the amount of $43.8 million, that pales in comparison next to the $1 billion transportation budget deficit.

“We must find a sustainable source of funding for our infrastructure and I believe that all options should be on the table, including reforming the inefficiencies highlighted in the DOT audit,” Kitchens said. “As we begin the budget discussion, I believe that all projects are important, not just the ones in southeastern Wisconsin. Tourism plays a vital role in northern Wisconsin, and having a strong transportation system is vital to bringing billions of tourism dollars to our communities. I look forward to working with my colleagues to find a sustainable solution for our transportation fund.”

You can read the full report here: legis.wisconsin.gov/lab/media/2591/17-2full.pdf.