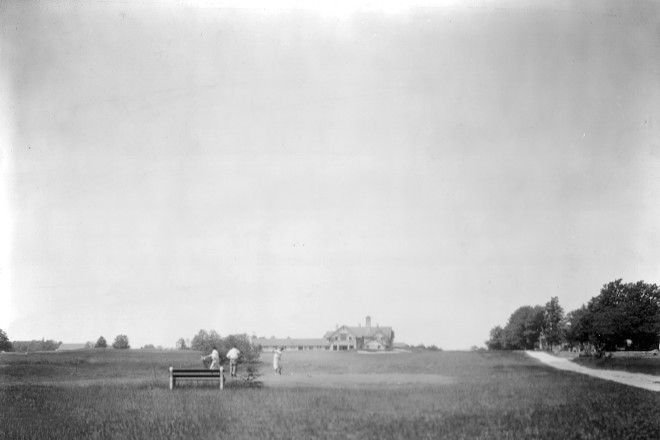 The Door County vacation is every bit a tradition, with reasons aplenty between the cherries, wine, beaches, ma-and-pa shops and serenity.

Somewhere on that list – not too high, not too low – is golf. Does it deserve a larger calling on the Door Peninsula? Maybe. Maybe not. Truth is, the turn of the century has replaced the centuries-old game with more novel forms of recreation.

Things weren’t always this way, though. There was a time when golf was a supreme attraction for Door County visitors. During the 1920s and ’30s, grandfather courses like Peninsula State Park and The Alpine were vacation epicenters. Meanwhile, only one course ruled the opposite side of the peninsula:  Maxwelton Braes. 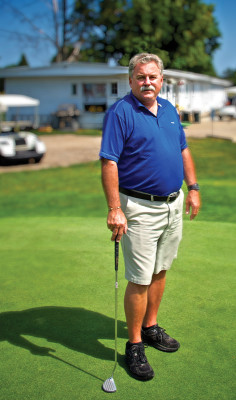 Near Kangaroo Lake but just south of Baileys Harbor and split by Highway 57, Maxwelton is one of 11 courses in the county and is by far one of the oldest. But in a county that survives on tradition and history, likely no other Door County attraction has changed more during the last 20 years than golf has.

Through that time, Maxwelton Braes was switching hands and losing some of its allure. Harry Ridings managed and owned the course for decades of popularity before he died in 1993. Under his watch, it was a destination resort for Midwest golfing tourists from Milwaukee, Chicago, St. Louis, etc.

Since Ridings’ legacy, the course struggled to maintain its management and ownership. Various unsuccessful attempts pushed Maxwelton into foreclosure, right where Baileys Harbor native Paul Becker found it in December 2009.

The outlook wasn’t good as, according to Becker, Baylake Bank planned to shut down the resort. One of the most quintessential Door County golf courses was on its way out, but Becker inquired and the two sides settled on an alternative:  he would lease Maxwelton and manage it as the golf course it had always been.

It was definitely a risky jaunt to take over a struggling golf course, but Maxwelton was Becker’s course growing up, where he would caddie for the right to free golf. Five years after signing the first lease, he’s still running the show. With a staff of eight part-time workers in the pro shop and a four-person maintenance crew, Becker is the captain of a small ship in a big, competitive sea.

“The goal was to maintain the bank’s asset as a golf course,” Becker says. “And that’s what we’ve done. I’m very proud of that.” 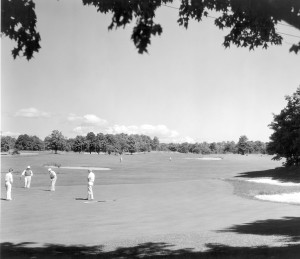 Just like its traffic, the course has seen better days. No irrigation system limits the maintenance crew during what is an already compact Wisconsin golf season. The fairways are more scruff than clean-shaven and, in the heat of summer, Maxwelton might show more Packer gold than Packer green.

But that doesn’t stop Becker, who seems a bit out of place, considering his 35 years of experience in the golf industry, some of it spent at Wisconsin summits Whistling Straits and Blackwolf Run.

If you asked him to, you couldn’t get him to leave the course nowadays. The connection he has built is too strong. He’s become an addict to the shared passion for the classic golf course.

“I always had family in Door County, and I never thought I would go back to run Maxwelton; that was the last thing on my mind,” he says. “But the opportunity came upon and I have absolutely enjoyed the hell out of it.

“I have enjoyed it immensely because I see the people who need Maxwelton Braes as a golf course. This is their place to come and have fun and not cost them an arm and a leg.”

As the manager, lead greenskeeper, head professional, and Mr. Do-It-All Becker carries the course along, even though he would disagree with that sentiment. He doesn’t want people to think that Maxwelton’s newfound life is about him. 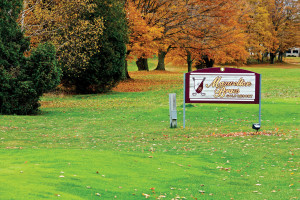 Instead, he reverts to the thought that Maxwelton Braes continues because of those people that will never let it die – the diehards, loyalists; Braes bandwagonists, if you will, people like Decker Woldt.

Although he holds some family association — Woldt is Becker’s uncle — the 94-year-old Texas man held affection for the golf course long before Becker was even around.

“I had a soft heart for Maxwelton Braes,” Woldt said. “After all, it was really a fun time to have a place like that.”

He grew up caddying at Maxwelton in the 1920s and ’30s earning his weekend spending money, where, alongside his brother, Woldt caddied for the original owner, Mike McCardle. In those days caddie rounds paid just $1, with the post-round hope of a 50-cent tip.

Arriving on summer mornings, he lined up among the other caddies as golf pro Art Saunders performed the odd ritual of tossing round numbered tabs into the air. The caddies scampered to grab the lowest numbered tab for the best chance at caddying twice that day. 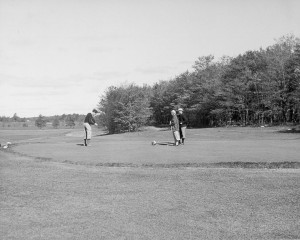 That tabs story is nearly 90 years old, but Woldt laughs and recalls details as if he lived it yesterday. He remembers watching the wealthy regulars pull up to the course in their limousines. He remembers McCardle ordering Woldt a limousine of his own one time, to ride from the golf course to the Baileys Harbor baseball game, where he dropped the caddie bib and transformed into batboy.

As he rattles off names and dates and stories from his many golfing decades, it’s easy to tell how important Maxwelton was (and still is) to his life. He was always a regular vacationing golfer to the course, though it’s been years since he last played it. Being displaced in Pampa, Texas will do that to you. One year he spent a month’s vacation playing nearly every day, but didn’t have his golf clubs with him the day before he left.

“I just walked out on the course and walked down number 18, which had an area out to the left side that was out-of-bounds,” Woldt said. “I went down there knowing that I wasn’t going to be back for another year or so. I sat there and just took in the view and found a couple of golf balls. The next day I headed back home.” 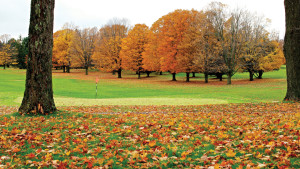 Woldt said that Maxwelton molded his life. It’s hard to argue against that. He’s just one of many, however. The course has held caddie reunions in the years since the Maxwelton hey-day. Throughout the years, there might be millions of memories associated with Maxwelton Braes.

That shouldn’t be lost in the sight of slightly imperfect fairways or in any impending plans held by the bank, because, all things considered, Maxwelton Braes is in as good of shape as it has been for years. Longtime visitors have promised Becker so. Though at one point the outlook seemed grim, one of Door County’s iconic golf courses has remained exactly that – iconic.

Because of Becker and various others, it’s still there and it’s still worth it.