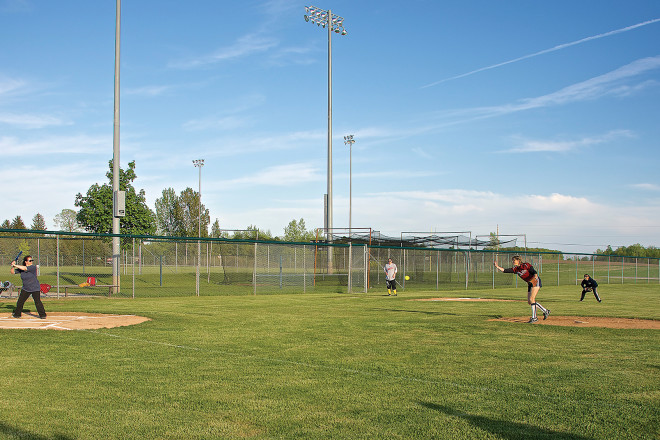 It was cold and windy at the south ball field in the Institute Town Park when the Hitching Post softball team met for its first practice of the year.

“Most of us are ball players, so it’s just getting the rust out,” said Tina Wagner, a long-time Hitching Post player who often takes her spot at the mound. 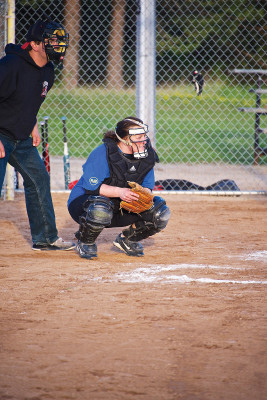 The rust shook out as players tossed big, yellow softballs and chatted about equipment, past games and new players. For player Tara LeClair, the rust was more tangible; she pulled two folded dollar bills and a pair of dirty socks from her cleats before stepping onto the field for the first time this season.

A Hitching Post softball practice could easily be mistaken for a family reunion. The players are mothers, daughters, cousins, aunts and nieces, and all of them can play ball.

Tina’s mother is a former Hitching Post player and her daughter Laura joined the team two years ago, as soon as she turned 21 and was old enough to play.

“We’ve been coming to games since I was little,” Laura said. “I remember playing around here [during games] when I was little, and we always said when we grew up we’d play for the Hitching Post.”

That’s kind of how it works – generation after generation of women gathering to play ball every Monday night.

The Hitching Post team is part of the Women’s Double-Header Softball League, a seven-team league that plays in northern Door County from May to August.

“It’s always been a lot of family, mothers, daughters, cousins,” said Kay Haen, owner of the Institute Saloon and matriarch of its softball team. She was leaning against the saloon’s century-old pool table, talking about the Hitching Post players who regularly come out on top at the end of the season. “That’s pretty cool to think one family is so athletic, and they are. It all comes so naturally. They come with smiles and they win games.”

Judging by the water cooler talk from players on other teams the Hitching Post is the team to beat, but for Tina every team is competitive and every game is good.

“I get to catch up with family I don’t see often,” Tina said. “For a lot of women, a lot of us are moms with kids, it’s just a night out with other women.” 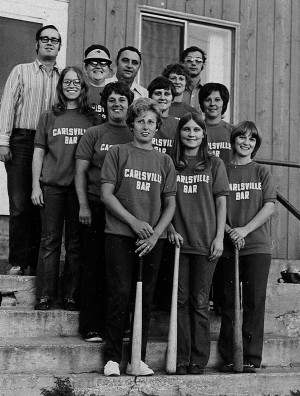 The league started decades ago, in a time when softball was so popular the county supported leagues in Sturgeon Bay and Northern and Southern Door.

Susie Schartner was one of the first players in the double-header league, once she helped convince former Carlsville Bar owner Bill Anschutz to sponsor a team. She had always loved to play ball, and having a bona fide team meant playing on a real field with decent equipment  – something a lot of the women had never done.

“We always hounded him for a team,” Schartner said. “My sister and I and a couple other ladies were always picking at him. All we had was other people’s backyards and the bats and balls we found in the bottom of toy boxes. He bought the bats and balls and we all passed them around – I don’t think any of us had seen new bats and balls.”

The men’s double-header softball league had been around for ages by the time the women’s league got started. The women could rarely get a night off, they had kids and farms to take care of, and when they did get enough players together for a game they could almost never find space on a field. Instead, they’d mow lines in empty meadows and use folded towels for bases.

But the real reason the league got started, Schartner said, may have been because of a friendly game with a team from the Bayside Tavern.

“We had a softball game one time with the Bayside, and I can remember that they had some good athletes up there but we had a whole bunch of farm women that played on our team,” Schartner said. “There were a few of us and when we got up there we had to share some of our girls with them. We beat them pretty bad, you know. 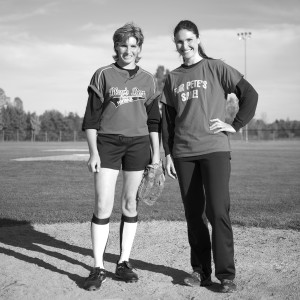 “They wanted us to go back to Bayside and have an arm wrestling contest… We had a few of these farm girls, and naturally we just pulverized them in the arm wrestling contest, too. The [Bayside] girls all said ‘have a drink on us, thanks for coming all the way up.’ They were so happy we were there. They gave us this cherry drink – we were a little leery, and we all drank it and it was like Kool Aid, and they kept pouring them and that’s all we remember of that night. That drink must have been pure alcohol!

“Our husbands maybe decided we should have stayed closer to home and drink beer instead of what we were drinking.”

So, Schartner said, the men decided to put together a women’s softball league closer to Sevastopol.

According to Haen, another early player, the league started with a bet. In the early ’70s, two men were having a drink at the V Bar in Valmy, and one offered a wager – who could put a softball team together first?

“Turned out those women are interested in playin’ ball,” Haen joked as she told the story to players at the Institute Saloon at a meeting to plan the 2013 schedule. “Who woulda thunk?” 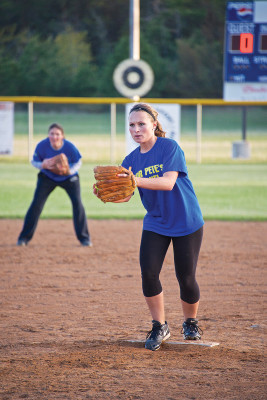 Things have changed since the days of the makeshift ball fields and the mysterious cherry drink. The teams now play on well-kept fields in town parks while their kids swing and slide on nearby playgrounds. And while there’s a healthy competition between the teams, there’s no animosity or gut-wrenching rivalry.

But when the Hitching Post plays Bley’s Bar, things get interesting as sisters Tara LeClair and Jamie Henschel face off on different teams.

“Ball was in our blood ever since we were born,” Henschel said.

The women and their sister Jodie Schartner all played for the Hitching Post at one time, often together. Then Henschel took a break for a few years to take care of her sons and the farm. When she was ready to pick up the bat again the Hitching Post team was full, but Bley’s Bar was looking for players. She decided to play for Bley’s where she could get some time on the field instead of the bench.

“It’s actually fun to play against her,” LeClair said. “I know her strengths so I always know where she’s going to hit. She’s always going to hit left field.”

While both said there’s no rivalry, LeClair and Henschel like the challenge of getting the other sister out. 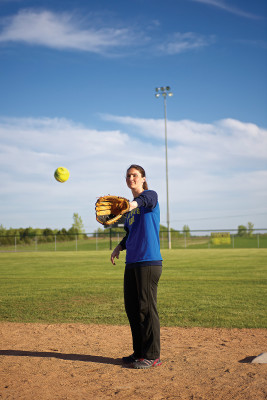 “When she’s up to bat it’s fun to try and catch her ball and get her out, there’s always that fun to it,” Henschel said. “She always hits the long ball to the left field – we know where to play her. If I’m playing against her I know what she’s expecting, so I try to pull one different.”

But it’s not just sisters that know each other’s softball style. Most of the women have been playing softball with and against each other since high school, sometimes for decades, and many of them play on volleyball teams in the winter.

“A lot of the girls in the league have been playing each other for years, and many of us played each other in high school competitively,” Henschel said. “We’ve grown to be good friends and good competitors as well. Usually when someone gets up to bat everybody knows where they’re going to hit – there’s a lot of that.”

There’s a big reason so many generations of softball players are on the field together – the older ones just can’t quit.

Haen has been playing since the mid-1970s, and she’s retired more than once. She’s even thrown away her cleats to prove she was finished with the game.

“I’ve hit the field three different seasons since then,” she said.

As they get older, many players transition to the outfield and let the players fresh out of high school take the infield positions. Sometimes it takes an injury to spark that transition. 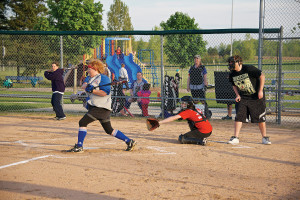 Henschel fills in for most positions on the field, and used to pitch regularly. She pulled her hip one season and now takes the game a little easier – she can’t afford to ruin her body playing ball when she’s got a farm to run. But even now that it’s a little harder to run the bases, she still gets the itch to get on the field every Monday night.

“The bug’s still in me,” Henschel said. “I don’t care to hang the glove up yet.”

When every softball game is over and a team has been declared the winner, the players come together for another ritual. They head to the winning team’s sponsor bar for bar games – like tippy cup, bar dice and a raunchy version of darts. The losing team buys the winning team’s beers, and the players share camaraderie across team, family and generation.

“There is no age group in friendship,” Haen said. “Or in team.”