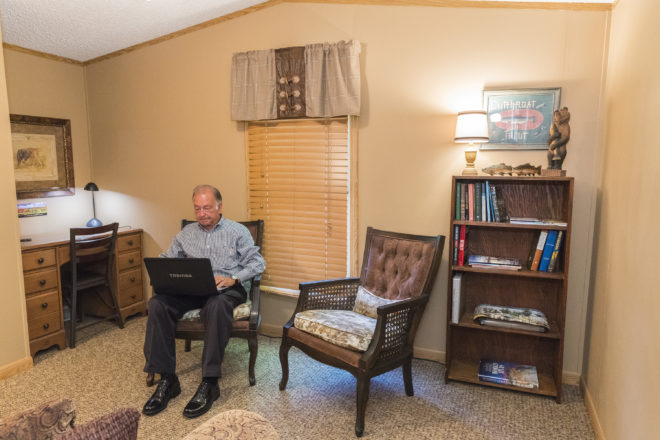 It was love at first sight between Boyd Stewart II and Door County.

The Texas native graduated from the University of Texas — Austin in ’73 and was hired as an intern for a division of The New York Times.

“They put me in Chicago,” he said. “We were doing a nationwide health and beauty promotion with a food chain, and they had me go around and interview and survey all the stores in the Midwest. They had me come up to Sturgeon Bay. That was the first time I’ve ever been in Wisconsin. It was the fall of ’73 and the trees were changing. I was absolutely stunned by everything. Texas is hot and flat, and this wasn’t. I just loved it.” 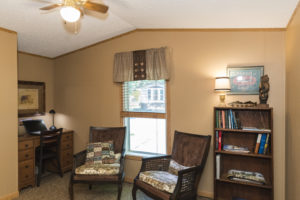 He has been coming up summers ever since.

“I was hoping to eventually come up here and retire,” he said.

Being a genial guy, Stewart easily made friends in Door County, and they were razzing him about talking about making the move north but not doing it.

So last year he started looking around for his dream cottage in the woods of Northern Door.

“I came up and quickly realized I didn’t have the resources to buy anything in Northern Door,” Stewart said. “I was about to give up on the idea, but I found a place in Sturgeon Bay that the kids were desperate to sell so they could move to Algoma. I told them I only had so much but I didn’t want to insult them, but that’s what I had. Well, I bought it outright for cash, a little home on the west side in Sturgeon Bay.”

The house at 628 N. Elgin Place is in the Sunrise Shores Mobile Home Park.

Now Stewart had a house in his beloved Door County. It was not the cozy bachelor pad/man cave he had in his mind, but that was soon to change. 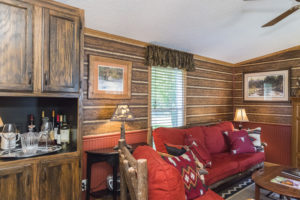 “I’ve met three people up here that have changed my life,” he said. “One is the pastor at my church, Nancy Bontempo. She’s helped me in my spiritual growth at the Friends Community Church.”

Stewart met the second person to change his life when he decided that if he was going to live here, he needed some income. At the time he was staying at the Square Rigger Lodge in Jacksonport, and owner Little Bit LeClair suggested Stewart meet AJ Frank, owner of Door County Trolley.

“That’s the Number Two man who changed my life,” Stewart said. “AJ hired me right on the spot. I have never, ever had a job I’ve enjoyed more, and he’s the hardest-working man I’ve ever met in my life. Great guy, great company. I love giving other people the feeling that I have about Door County every day on scenic tours.

“The other person who changed my life is a lady, Kay Seitz, owner of Northern Territory, which is a home furnishing store in Sturgeon Bay,” Stewart said. “When I walked into her store last December, I loved everything in there.”

Seitz recalls that Stewart came in twice. “He was such a nice man. He came in and was like, ‘Boy, if I had a place up here, this is how I would decorate it.’ And then two days later he was back and said he had bought a place.” 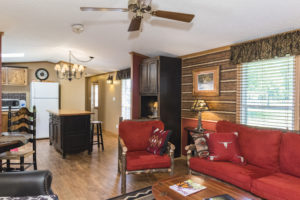 “Kay said, ‘Let’s get you some furniture,’” Stewart recalled. “I said, ‘Kay, there is no way. I love everything in here, but I’m on a very small budget.’”

“I said, ‘You just never know. Sometimes it’s a surprise what we can do on a budget,’” Seitz said.

“I gave her this tiny budget and she said, ‘I can work with that, but I can’t do it right now,’” Stewart said. “She asked for some time to put a plan together.”

Stewart took photographs of items he liked in Seitz’s store, and then gave her a tour of his new home.

“I thought it had good bones and some real potential,” Seitz said. “It had a nice, open floor space, so you can give it a better illusion of a larger space with the right colors and textures. Paint and wallpaper go a real long way. He kind of gave me carte blanche as long as I stayed within the budget. He gave me the keys and said, ‘I’ll be back in March.’”

When Stewart returned to Door County in the spring of 2016, Seitz and the two decorators who worked on the home were excited to reveal his new home to him.

“We all went over there so we could see his face when he walked in. It was a lot like what you see on HGTV programs,” Seitz said. 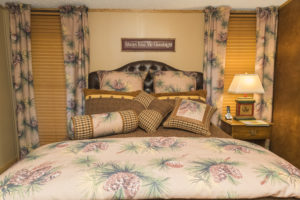 “When I came back, Kay said, ‘Do you trust me?’” Stewart said. “I was blown away. I really got scared. Kay and her design team were in my little place, and I said, ‘Kay, I’m really scared. I’ve just got a tiny budget. I’m not going to be able to pay for all this.’ She said, ‘Boyd, it’s all done in the budget you gave me.’”

“He was holding back tears,” Seitz remembers. “He had all of us doing the double gulp because he’s such a nice man. He said, ‘I never, ever imagined in my life it would be like this.’ To get that kind of response was worth every bit of the work, when you get that from a customer.”

“She is so talented,” Stewart said of Seitz. “I think she can work with anybody.”

In particular, he likes what she did with the “very, very plain” kitchen area and how he had described to her that he grew up in piney East Texas, and she used that idea to make a pine-themed bedroom for him.

“I love what she did,” he said. “I am still surprised when I walk into my house and realize that it’s mine. I still can’t believe I own it outright because it’s such a low budget and it’s so nicely done. It’s a good feeling to live up here.”