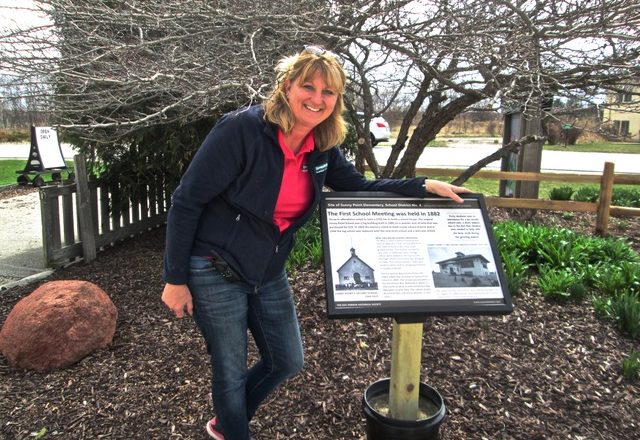 The Egg Harbor Historical Society (EHHS) recently placed the second of its historic school signs, this one at Sunnypoint Gardens. Why Sunnypoint Gardens? Because directly across the highway is one of five schools that served the residents of the township of Egg Harbor for many years, Sunny Point School, District #4  from 1883 to 1965. The building that still stands was the last of three that served students in the area, it was built in 1919. Both the school and Sunnypoint Gardens were damaged in the tornado of 1998 and have seen repair and rebuilding. Stop at Sunnypoint Gardens and check out the history of the school. The EHHS previously placed a similar sign at the fire station park on Harbor School Road for the “village” school that was demolished in 1977. The third and final sign will be going up at Door Peninsula Winery later this summer to recognize the Carlsville School, District #3.