“Work is the meaning of my life!” said the title character in Paddy Chayefsky’s 1954 television play The Mother, when her adult daughter wanted her to stop looking for a job and just enjoy her retirement.

Larry and Eunice Manz, who respectively will be 94 and 92 this fall, share this sentiment. At an age when most of their contemporaries have settled into retirement homes, they report for work each weekend at the Liberty Square Gourmet Shop.

The career journey that brought the Manzes to this work was indeed circuitous. Larry worked as a civil engineer in Milwaukee and takes credit for a number of the city’s landmarks, ranging from the Allen Bradley clock tower to the original Mayfair Shopping Center. In 1970 a friend of the Manzes asked Eunice to manage a Swiss Colony-style store in Whitefish Bay. 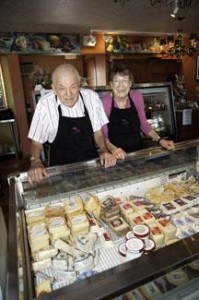 Larry and Eunice Manz may be well into their 90s, but they’re not the retiring type.

“I hadn’t done that before,” Eunice said. “A mother and housewife, I never had a job. But Larry thought I could do it.” And she did.

“After five years, Larry thought I should buy into the store,” she continued, “but they said no, it was a family business.”

As Larry had just retired, she resigned as manager and the two began looking for a similar business opportunity. They wanted to work together and as Eunice explained, “I didn’t know how to be a civil engineer!”

Their search took them to Cincinnati (Eunice was from Cleveland) where in 1977 they opened Mallers Cheese Shop, the name a composite of the couple’s surnames. The store became almost too successful; “We were working so hard!” Eunice laughed. “It was not a retirement!”

Larry had been raised on the East Side of Milwaukee and had vacationed in Door County for years. He and Eunice continued to visit the peninsula and on long weekends while still living in Cincinnati, the couple began building a house on the northern edge of Egg Harbor. “I designed the house,” Larry said.

“I helped build it, too,” Eunice said, “and I had never held a hammer until we started the house!”

“We did the whole house ourselves,” Larry continued, “laid blocks, did the stone work.”

“I brought in stones from the yard!” Eunice added.

In 1982, they moved to Door County to begin a second “retirement” business. “We put the store up for sale on Friday afternoon,” Larry recalled, “and I had a check in my hand by Saturday noon!”

“The shop in Cincinnati is still going,” Eunice said. And the Manzes continue to live in the house they built.

As the Country Walk complex was being completed in Sister Bay when the Manzes moved to Egg Harbor, they had to take a year off from work before opening their next business. In 1983, Manz Specialty Foods was the first store to open in the new development; in 2003 they sold the gourmet shop to new owners who now operate it as Top Shelf.

However, the Manzes’ retirement was short lived. “Richard and Pam Wegner had been customers at our store,” Eunice said. “When they planned the Liberty Square Shops, they asked us to consult with them for the gourmet shop. And after they opened in 2007, they asked us to work part time.”

“The Manzes were consultants,” Pam Wegner said, “identifying good products for us to carry in our deli. Eunice continues to identify new award-winning foods and wines. We have a practice that before we carry something, we have quite a few people taste it; Larry and Eunice always participate. Eunice’s palate is as good as it ever was. She is fabulous at coming up with great new ideas!”

General Manager and part owner Chris Anderson, who sometimes works in the shop with the Manzes, agrees. “Eunice has an encyclopedic knowledge of specialty food,” he said. “A customer came in that was trying to find an exotic mustard made in Germany in some obscure hamlet. Eunice knew the name of the product and gave the man the name of a store in New York where she thought it might be available. Then she turned to me and said, ‘Chris, we ought to carry that product; it’s just delicious!’”

The Manzes’ knowledge of food came naturally to them. “Larry and I always loved food,” Eunice explained. “My parents entertained a lot, and I was used to good food. I loved entertaining.”

And then when the couple planned to open their own store, they began visiting International Fancy Food shows. Eunice recalls that the first one she attended in 1975 was held in a hotel room in Chicago, as the gourmet food movement was still in its infancy. Before long the show had expanded to a twice-a-year event, at New York City in the summer and San Francisco in the winter, each a series of lectures and seminars.

“You can eat your way forever and ever!” Eunice said. “That is how we learned.”

“There were about 1,700 exhibitors,” Larry remembered about the later events, and noted that most countries had exhibits, too.

However, the Manzes skill at working with people equals their facility with food. “Eunice is involved in selling and customer service,” Wegner said. “Larry helps with pricing, stocking, and keeping the store looking well. He greets his old friends and tells his latest jokes.

“Eunice has a prodigious memory,” she continued, “recognizing people from years ago. She’s amazing, absolutely amazing! She’s a role model for the people working here. Her goal is to help customers find things they love so that happy satisfied customers will come back. She knows about pairings and will go to any lengths to help people.”

Wegner told of a customer who called in an order for a gift basket on a Sunday afternoon, and then asked if it could be delivered by 5 pm that day. “Of course we can do that,” Eunice told him, and she and Larry delivered it.

“I am astounded by their energy level,” Anderson said. “I don’t know how they do it!”

“We have a stream of people on weekends that ask, ‘Are Larry and Eunice here?’” Wegner said. “What days to they work here?”

The answer, of course, is weekends. On Mondays the couple volunteers at Scandia Village, delivering meals on wheels. Eunice helps out in the office at Scand, if needed, and she volunteers through Social Services, running errands and driving for a woman who requires assistance.

Those people who count off days until their retirement marvel at the Manzes.

“You’ve got to keep moving!” Larry joked. “A moving target is hard to hit!”

“You have to keep your brain going as well as your body,” Eunice added. “And we still love the business and the people.”

“Yesterday one of our customers we hadn’t seen for years,” Larry said, “called and asked if we can have dinner together.”

Asked if they have future plans for retiring, the Manzes offered emphatic no’s.

You see, work gives meaning to their lives.

Visit Larry and Eunice Manz on weekends at the Gourmet Deli at Liberty Square in Egg Harbor. For more information, visit http://www.libertysquareshops.com.

A woman goes into a pet shop to buy a parrot, sees one for 50 bucks, and tells the proprietor, “You’re crazy! You should be asking for more!”

But she wants the bird anyway and takes it home, where the parrot looks at her and sighs, “A new madam.” Her two daughters come into the room, and the bird sighs again, “A new madam and new girls.”

And then the husband walks into the room. The parrot turns to him and says, “Hi, Keith!”