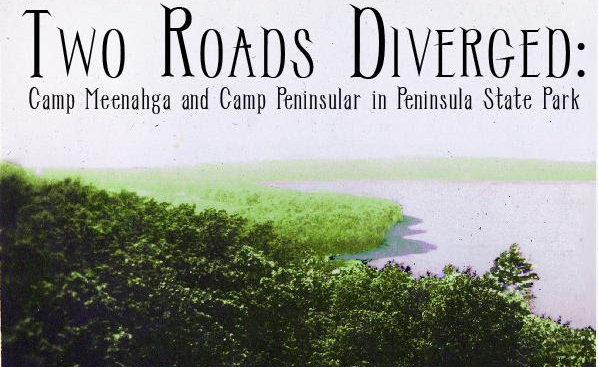 2016 is an important year in park history. Nationally, it marks the centennial of the National Park Service. On a local level, it’s the 100th anniversary of Camp Meenahga’s founding in Peninsula State Park. In recognition of these two anniversaries, this year’s Ephraim Historical Foundation (EHF) exhibit is Two Roads Diverged: Camp Meenahga and Camp Peninsular in Peninsula State Park.

The exhibit focuses on two unique camps once located in the park. Camp Meenahga was a girls’ summer camp, with activities like swimming, horseback riding, sailing and performance arts. Meenahga existed from 1916 to 1948, surviving both World Wars and the Great Depression. The second camp, Camp Peninsular, was a Civilian Conservation Corps (CCC) camp founded in 1935. It housed young men whose families were hit hardest by the Great Depression. In exchange for 40 hours of work per week in the park, these young men were paid $30 a month.

Two Roads Diverged: Camp Meenahga and Camp Peninsular in Peninsula State Park will be on display in the Anderson Barn Museum (3060 Anderson Lane) beginning June 17. Admission is $5 for adults, $3 for students, and free for EHF members and children 5 and under. The Anderson Barn Museum is open from 10 am to 4 pm, Tuesdays to Saturdays through Sept. 3. From Sept. 9 to Oct. 15, the museum is open Fridays and Saturdays, 10 am to 4 pm. For more information, contact Emily Irwin at [email protected] or 920.854.9688.