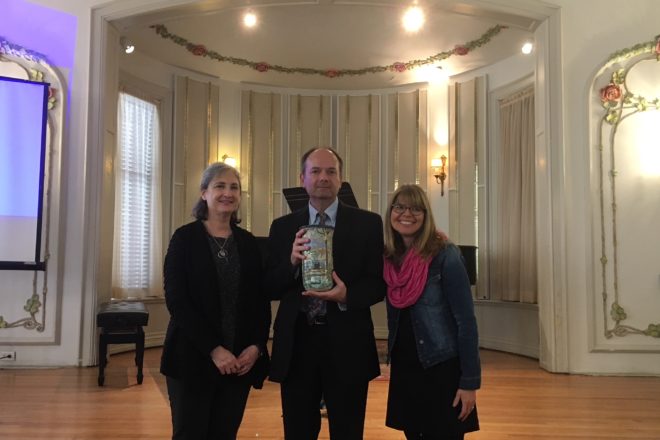 At the annual workshop of the Association of Wisconsin Symphony Orchestras (AWSO), the Service to Music Award was presented to Wisconsin Public Radio (WPR). AWSO serves as a resource for the growth and appreciation of orchestral music in Wisconsin.

The annual workshop was held at the Wisconsin Conservatory of Music on April 27 in Milwaukee. Social media, the new tax laws and legacy giving were all topics that were covered.

The Service to Music Award is given to an individual or organization that has had a musical impact on more than one local community, has had a regional and/or statewide impact on community music organizations and that impact has been on multiple areas such as education and community outreach.

“It was a unanimous decision by the board of directors of AWSO to give the Service to Music Award to Wisconsin Public Radio,” said AWSO president Jill Quigley. WPR just recently celebrated 100 years of enriching the quality of life in Wisconsin and is one of the oldest radio stations in America.

This year’s award was designed and created by Jeanne and David Aurelius of Clay Bay Pottery in Ellison Bay. They were thrilled to create this one-of-a-kind piece of pottery titled “WPR: A Station For All Seasons.” Accepting the award on behalf of Wisconsin Public Radio was Ruthanne Bessman, host of “Classics by Request;” Peter Bryant, program director; and Lisa Nalbandian, station manger. 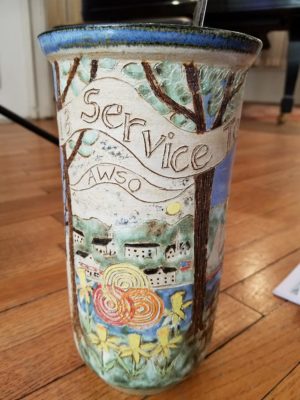