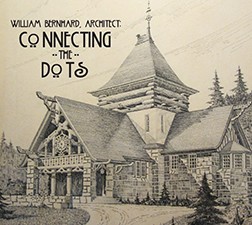 What if there had been no Frank Lloyd Wright on the Chicago architecture scene in the early 1900s?

And what if anti-German sentiment had not unleashed the frenzy that interrupted so many lives during World War I?

These and other questions are posed at the Ephraim Historical Foundation’s engaging exhibit, William Bernhard, Architect: Connecting the Dots. You may find yourself spending more time than planned at this comprehensive look at a remarkable local talent and colorful character. One word to describe it is stimulating.

Bernhard’s life, career and creative output are extraordinary – cosmopolitan for their time and definitely fast track. He was born in Russia in 1885 and educated in Germany, immigrated to the US with his Swedish wife in about 1910, moved to Chicago and won a competition in 1913. All of this by the age of 28.

Why Connecting the Dots? Bernhard’s story has many dimensions, which is what makes it so interesting. Organizing the show raised questions and presented challenges. Connecting the places, people and events of his professional journey and eventual attraction and move to Ephraim took some digging. 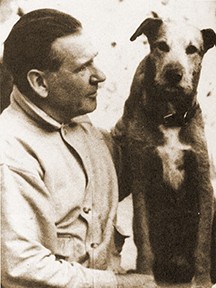 Bernhard was incredibly resourceful and intelligent. How he managed to achieve recognition in a highly competitive architectural climate in Chicago remains up for debate. Winning the city planning competition definitely opened doors. But talented architects were at every corner, so his charisma must have played a role. Our research continues.

Upon being sent to Germany for his education, he assumed the name Wilhelm Bernhard. This later worked against him at the onset of World War I. Chicago’s large German population was a target for attack by “100 percent American” forces scrutinizing professional credentials and immigration status.

He began signing his name as “William” professionally and formed close friendships with other German families, which he maintained for the rest of his life. These connections brought him to Door County, where many Chicago residents sought refuge in Fish Creek at upscale, German-friendly Welker’s Resort. Bernhard later designed second homes – featured in the exhibit – for several of these affluent families.

That came after he designed and built his own home, a fortress overlooking Eagle Harbor, in the early 1920s. It introduced a new and unique style reflecting European influences using the local stone and wood he favored in many of his more than 150 Door County commercial and residential designs. The original Ephraim fire station, now a museum, is a prime example. Ephraim’s Village Hall is another, though Bernhard’s original design was scaled back due to complexity of construction and related high costs. He was not one to compromise. 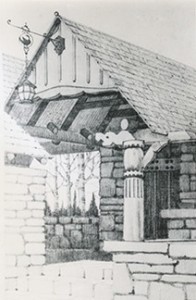 His life story is a visual feast — intricate architectural drawings, color sketches of buildings and city planning projects, photos, and artwork abound. A proposal to the US Lawn Tennis Association in 1938 is especially impressive, with many exquisite pencil drawings of sculptures, building facades, a winding staircase to the umpire’s chair, and even a concert hall.

Bernhard often created a fresh style for each project, and every remarkable detail is drawn by hand.

Versatile as always, he secured Peninsula Park projects through the WPA following the Depression. His stunning drawing of a stone lookout for the Park, shaded in colored pencil, is surrounded by carefully rendered foliage.

If circumstances had been different, perhaps Bernhard could have taken center stage among Chicago architects.

In that sense history was kind to us. That break gave us his legacy of unique buildings and challenges us with many more dots to connect.

The exhibit is open Tuesday through Saturday, 10 am – 4 pm at the Ephraim Historical Foundation’s Anderson Barn Museum, 3060 Anderson Lane. Call 920.854.9688 for details.