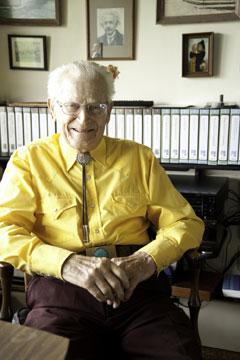 Herbi Hardt at his home.

Ninety-eight years do not seem enough to hold the experiences in the life of Ephraim’s Herbi Hardt.

Born on March 11, 1912, in Stuttgart, Germany, Hardt spent his early childhood in the midst of World War I. Two of his uncles were killed in the fighting, and although this was an agonizing time for his family, it also helped to shape the young man. Many Germans bitterly hated the French, but Hardt’s mother, Anna, told him, “They are human beings, too.” Those words became the basis of his philosophy of life. 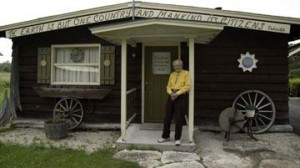 Herbi Hardt at his home between Fish Creek and Ephraim.

The Hardts lived near an army airfield on the Western Front. During a kindergarten field trip, the students were amazed when a small red plane landed and Manfred von Richthofen, the Red Baron, emerged to shake hands with each of them. Hardt’s family was often asked to house and feed German soldiers on their way to battle. Many thanked Hardt’s mother for her kindness and one officer, in particular, promised to do something to help the family when the war was over. When Hardt was nine, a letter arrived, inviting him to spend the summer on the soldier’s farm, where food was plentiful. Hardt remembers it as one of the happiest times of his childhood.

But that peaceful time did not last. Hardt remembers eating breakfast on their balcony one Sunday morning as a parade of Hitler’s Brown Shirts marched below. His father, Adolph, said, “They’re drawing too many followers. I think we should go to America for five years until this blows over.” He wrote to a distant cousin, addressing the envelope in German to Frederick Heinrich, Chicago USA. In six weeks, a response came, saying that the cousin would sponsor their immigration. By the time their travel documents arrived 15 months later, both the cousin and his wife had died, but their daughter paid the $500 for the family’s passage.

They left Bremer Hofen on Sept. 19, 1923, headed for Ellis Island. However, a storm caused the Bremen Yorck to change course, and they landed in Boston. They were processed in a warehouse and, after many hours without food, were attracted by the aroma of coffee from a lunch counter. Other passengers, who spoke no English, were unable to make their orders understood, but Hardt’s French teacher had tutored the family in basic phrases. Hardt’s father held up a $1 bill and said, “Give me for one dollar, sandwiches.” They got 10 of them, and Hardt says he can still remember how good the ham tasted.

When they arrived in Chicago three days later, their plans took an unexpected turn when they discovered that the cousin who had paid their passage expected Hardt’s parents to work as her servants. The money was repaid, but the cousin’s demands caused a breach in the family.

In his youth Hardt hoped to become a sculptor, and arrangements were made for him to study after high school with the famed Lorado Taft at the Art Institute of Chicago. But the 1929 Depression ended that dream. Hardt’s father lost his job with a manufacturer of steel strapping (where he was paid $1 for each of several inventions), and Hardt went to work to help support the family. Although he was never able to study sculpting, the natural talent he had is still evident in a bust he created at 16 of his baby sister, Anneliese, who died a year before the family sailed to America. 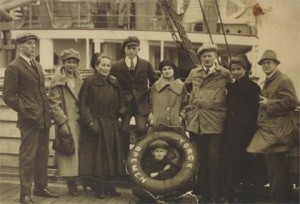 Herbi Hardt’s family aboard the S.S. York enroute to American on Sept. 24, 1923. Hardt’s mother, Anna, is second from left; his father, Adolph, is at fart right; 11-year-old Herbi is in the life preserver. The Hardts arrived in Chicago two weeks later. Contributed.

Hardt’s second career choice was landscape architecture, and he was hired as an apprentice at a greenhouse with 10 acres under glass. His pay was $18 a week. Nearing the end of the four-year apprenticeship, Hardt planned to start his own business, but fate took him in a different direction. For some time, he’d been singing with the German Light Opera Company, and a talent scout for the 1933-34 Chicago World’s Fair attended a rehearsal and invited several members of the group to audition. Hardt’s dramatic tenor earned him a spot as an entertainer at the Old Heidelberg Inn, part of the fair that was to open on May 23, 1933.

Shortly before that, a terrible fire at the stockyards caused the city to issue a call for residents to help firemen. Hardt and his cousin volunteered. Hot and thirsty, they drank from the only water available, which had been pumped from a creek near the slaughterhouse. Hardt became very ill with typhoid and barely recovered in time to start the “gig” at the inn that paid $20 a week for seven nights’ work. He was master of ceremonies for the inn’s entertainment and also was invited to become the singer with the WGN radio comedy team of Louie and the Weasel, popular competitors of another comedy duo who later became known as Amos and Andy.

The butcher the Hardts patronized, a fellow named Thade (Ted) Cornils, became a fan of Hardt’s group and often brought his family to hear them. A one-man Chamber of Commerce for Door County, Cornils had purchased 120 acres north of Fish Creek for $5,900 in 1929, including 20 acres in Peninsula Park. 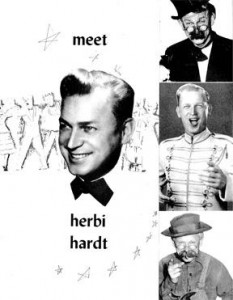 Hardt’s dramatic tenor earned him a spot as an entertainer at Chicago’s Old Heidelberg Inn in 1933.

The Cornils became friends with the band members Hardt worked with and, in 1936, Ted asked what they planned to do on their summer vacation. The trumpet player, a son of Dr. Crane on Washington Island, said he planned to visit his father, and Ted suggested that Hardt ride as far as Fish Creek and spend a week at his farm.

One week turned into two, followed by a repeat visit in the summer of 1937. Hardt, whose family had been hiking enthusiasts in Germany, reveled in exploring Peninsula Park. Through Cornils, he became friends with the early park superintendents, as well as Jens Jensen, the famous landscape architect and founder of The Clearing. He remembers sitting on a log with the two older men as Jensen discussed what he hoped to do with his land on the bluff above Green Bay.

By the summer of 1938, Hardt was back at Cornils’ farm, this time as the husband of the butcher’s daughter, Emily. They had married at the courthouse in Sturgeon Bay after dating at midnight movies, followed by 35-cent shrimp cocktails at Toffenetti’s Restaurant.

Thus began a new life, and a 75-year connection to Door County.

Next Issue: Part 2 – Another war, and a life’s second act in Door County.