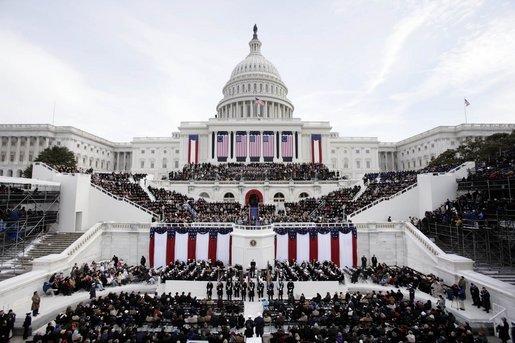 A sea of onlookers witness the second swearing-in ceremony of President George W. Bush at the U.S. Capitol Jan. 20, 2005.

Until 1933, Presidents were inaugurated in the spring, either in March or April, but in 1933 the ceremony was moved to January 20. Why was it moved to the dead of winter, a day that tends to leave men shivering in their overcoats as they take command of the highest office in the land?

In the 19th century, it took newly elected presidents more time to assemble a staff and undertake the move from their home to Washington D.C., so it was practical to give him four months to get ready for his new office.

During the depths of the Great Depression, however, Congress realized it was impractical to have a newly elected president wait four months to begin tackling a deepening national crisis. So the 20th Amendment was passed, moving inauguration day up six weeks to January 20 to speed the transition from one administration to the next.