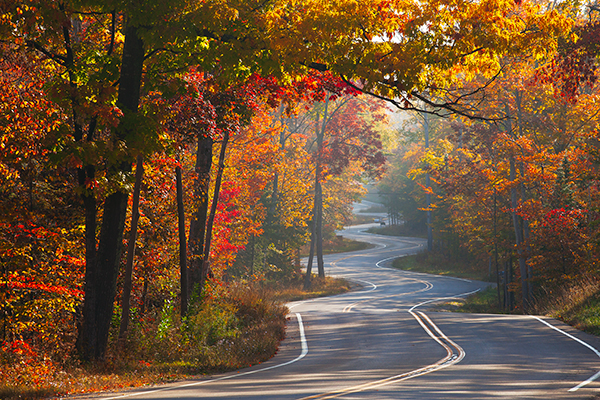 The curvy road to Gills Rock has a purpose. Photo by Lukas Frykman.

While the design of the final stretch of Highway 42 from Charlie’s Smokehouse in Gills Rock to the Washington Island Ferry Dock might annoy those hurrying to catch the boat, those not in a rush often stop to take pictures or just enjoy Door County’s beauty from their car. They’re supposed to.

It’s one of the most-photographed stretches on the peninsula, and one kids love. Jens Jensen, world-renowned landscape architect and founder of The Clearing Folk School in Ellison Bay, actually played a role in designing the 1.5-mile stretch of road. He tried his best to make people notice their surroundings more and enjoy the ride.

“I don’t know that he designed it, laid it out, or just advised the state on it,” says Mike Schneider, Executive Director of The Clearing. “I don’t know whether it was just to preserve some good trees, or just to slow people down, or both…but he was a great one for curving paths, so that people would slow down, relax, and just enjoy the drive more.”

Thanks to the little-known efforts of one widely-known man, those who venture to the tip of the peninsula surely will.