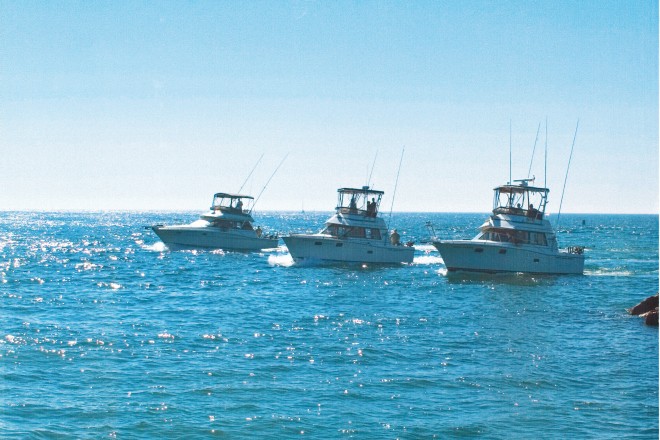 I’ve always thought the best way to see Door County was from the water, looking back toward the peninsula. Whether paddling a kayak along the shoreline of Lake Michigan or island hopping aboard a sailboat in Green Bay, there is nothing better than peering at the sandy beaches, rugged bluffs, and quaint villages and being able to say, “I live here.” From the countless sunrise paddles to sunset sails, it’d be tough to say I’ve ever had a bad experience on one of these awe-inspiring, mini-adventures. However, ask me how many times I’ve gone fishing, much less caught a fish, during my time in Door County and I might be too embarrassed to answer. After my cheeks flushed a telling crimson, I’d probably regroup and launch into a story, a fish story. Hopefully by the end of my discourse of intricately weaved details, some real and some imagined, I’d have convinced the listener I wasn’t a complete failure when it came to fishing.

Let’s just say if I were to ever need cold, hard evidence of my fishing excursions I’d need to enlist the help of an expert. Thankfully, the harbors and marinas along the Door Peninsula are sprinkled with charter fishing companies whose U.S. Coast Guard certified captains have flourished by taking individuals such as myself, and those with more experience, fishing.

According to Scott Gutschow, owner of Reel Action Sport Fishing Charters, Inc. of Sturgeon Bay, “The last three years have been record book years. The fishing is so good it’s an experience you’ll be able to tell your grandkids about.” After such successful trips the last few seasons, captains of the charter boats around the county can almost guarantee customers will catch fish on their trips; however, despite the majority of trips that “limit out” – where all patrons catch the maximum number of fish allowed by regulations – it seems no one wants to jinks the trend. “I hate to say it,” Gutschow continues, “but it’s got to come to an end sometime.”

Reel Action and more than ten other outfits, some running multiple boats, offer trips out of Sturgeon Bay – one of the greatest locations in all of the Great Lakes for charter fishing. The canal offers easy access to both Green Bay and Lake Michigan. The close proximity to a fish hatchery, Strawberry Creek (the northernmost site on the peninsula where the DNR stocks fish), as well as the Bank Reef all contribute to the trophy catches around Sturgeon Bay. It is thought that even if the fishing were to slow down around the county the Bank Reef, a perfect natural playground for fish of all types, would likely remain a hotspot.

If the group booking the charter values the views while on board as much as the time spent reeling in a catch, heading further north along the peninsula is a viable alternative. There are a number of charter companies who call Baileys Harbor home base. After leaving the town Municipal Marina or the Baileys Harbor Yacht Club Marina and depending upon where the fish are biting, captains have the choice of heading south toward Cave Point and Whitefish Dunes State Park, heading north toward the opening of Moonlight Bay and Cana Island Lighthouse, or heading straight out into Lake Michigan. Considering most charter trips typically occur at sunrise or sunset, this experience tends to be postcard perfect.

Continuing the trek north along the peninsula will result in a lesser concentration of fishing charter companies. A handful of boats run charters from Gills Rock, Ellison Bay, Rowleys Bay, and there is even a charter company on Washington Island. Mike Stults, Captain of Reel Dreams Salmon Charters, boasts his island locale offers him “the capability of fishing calm waters almost everyday. Leaving from Jackson Harbor,” he says, “I can usually find a place to hide from most any weather.”

The variety of places where people can step from the dock to board a charter boat in Door County also leads to a great diversity in the species of fish caught throughout the season. As the shoreline warms up after the ice thaws, April and May become prime times for catching Brown Trout, Walleye, and Smallmouth Bass. As the season progresses, these fish are mixed in with Lake Trout and Rainbow Trout because many fish follow the temperature breaks toward the middle of the lake. Another offshore find tends to be Steelhead, as they prefer colder waters. Heading into the end of June, King Salmon, also known as the Chinook Salmon, begin to lurk in the deep waters off the shores of the peninsula. By the time Door County’s tourist season has hit its stride, the fishing action around the peninsula has also reached a peak and an array of fish can be reeled in throughout the summer and fall.

Reeling in these fish is the privilege of the paying customers aboard the charter trips; however, the work aspect falls on the shoulders of the captain and his or her first mate. Relying upon their years of experience as well as top of the line equipment, such as radar, sonar, GPS, and fishfinders, the crew sets and resets lines until the fish start to nibble. Generally, the proficiency with which these crews operate makes the waters surrounding Door County seem more like a pond in their own backyard than part of the Great Lakes System. Captain Andy Isaacson, a fisherman with this level of experience, is one example. He started as a first mate for the Fish Doctor when he was 13, got his Captain’s License at 18, and now owns and has been operating his own charter company for nine years, Silver Strike Charter Fishing. Despite his years of experience, Isaacson attributes his success “partially to my youth. I’m not afraid to try new things – I’m not stuck in my ways…It’s finding the right combination of what works and continually tweaking that.”

An added benefit to having someone who has worked out the kinks and found the proper formula to catch fish is that charter companies also clean the fish. At the end of the trip the fish will be ready for patrons to take home in their own cooler. Some companies will even send the catch to one of the commercial fishing companies in the county for further processing. The Hickey Brothers Fish Market in Baileys Harbor, for example, will filet, steak, or even smoke the fish and then vacuum pack them. Another company, called Flying Fish, based out of Ephraim, specializes in shipping fish on dry ice throughout the United States. That way, the next time a customer has to think about the fish is not until they’re back at home grilling it for friends and family.

If a package on my doorstep with vacuum-packed, frozen salmon filets weren’t cold and hard enough evidence to convince others of my fishing abilities, I’m not quite sure what it would take. I suppose a few photos of me reeling in a twenty-five pound salmon might not hurt. Besides, then I’d not only have visuals for the next time I told my fish story, I’d also have one more way of preserving the memories of well-spent day on the water in Door County.