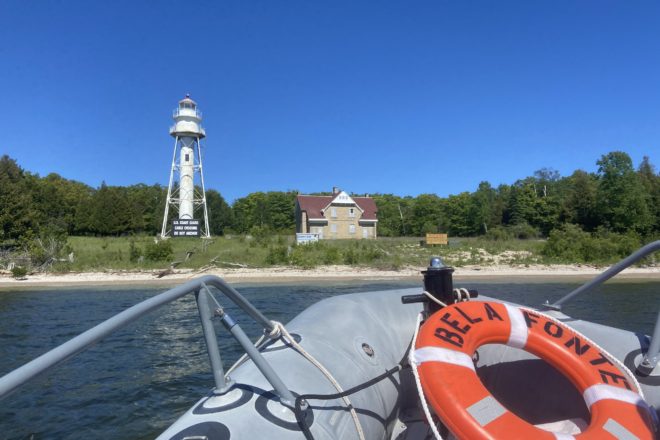 The Belafonte pauses near the shores of Plum Island and the Plum Island Rear Range Light. Photo by Maddy Schierl.

Peering over the sides of the inflatable Belafonte raft, I could see massive, mossy beams stacked underwater like a fallen tower of giant Jenga blocks. The sunken remains of the schooner Grape Shot – sitting under just eight feet of water near Plum Island – seemed close enough to touch.

While aboard the Belafonte – captained by Matt Olson of Door County Adventure Rafting – being up close to maritime history is par for the course. The Belafonte is a 24-foot, hard-bottomed, inflatable boat – perfect for sidling up to bluffs and lighthouses in depths that larger vessels cannot approach.

The Death’s Door Tour aboard the Belafonte was one of 13 tours that were part of the Door County Maritime Museum’s (DCMM) 27th annual Spring Lighthouse Festival, held June 12-14. Festival participants explored Door County’s 11 historic lighthouses from the air, water and land.

Although the word “festival” might evoke images of elbow-to-elbow crowds, the Door County Lighthouse Festival is entirely different – which is the reason why it was able to happen this year at all.

“We made the decision to continue on with the event because this isn’t your typical Door County festival,” said Paige Funkhouser, DCMM’s community engagement manager. “We are able to socially distance, and we are able to sanitize each vessel. It is important to be able to give people something to do safely during this pandemic. Everyone is under a lot of stress right now that they’re not used to.”

It turns out, there’s nothing like a zippy ride on the water to melt the stress away. Skipping over clear waters, the Belafonte began its journey in Ellison Bay before rounding the Ellison Bluff Headlands, entering Death’s Door Passage and pausing at both Plum and Pilot Islands. Although the wreck of the Grape Shot was an undeniable highlight of the tour, its focus was on the Plum Island Range Lights and Lifesaving Station and the Pilot Island Lighthouse.

As we floated just feet away from the shores of Plum Island, Olson told us about the history and function of the range lights. Built in 1896 and consisting of a front and rear light, they helped boats to safely circumvent nearby Waverly Shoal and navigate into Death’s Door Passage. Although the lights are now LED, they function in much the same way as they did when they were built: Sailors line up the rear and front lights vertically to navigate past Waverly Shoal.

After learning about the range lights and the nearby Plum Island Lifesaving Station, we breezed over to Pilot Island – the home of Olson’s favorite lighthouse. As we approached the island, clouds of birds circled around us before settling back down on the bare branches of the island’s skeletal trees. The image looked like a vignette from an Alfred Hitchcock film, complete with black cormorants hunched along the rocky shore and a ghostly lighthouse rising against a bleak backdrop of water. It’s easy to see why the position of lighthouse keeper on Pilot Island had such a high turnover rate!

Although the island is definitely spooky, the lighthouse possesses a quiet and stalwart beauty. Built in 1856 out of Milwaukee’s signature “Cream City brick,” it was equipped with both a light and a fog horn. While it was still functioning, the fog horn was so loud that it killed birds before they even hatched, which discouraged them from nesting on the island. With the fog horn gone, the birds have returned, and the area is now a protected bird sanctuary.

As I was looking at Pilot Island Lighthouse from the water, I began to imagine the lives of the keepers who had lived on the island and the sailors who had depended on the aid of the light. In a lot of ways, this way of life is nonexistent today, yet with the lighthouse right in front of me, it was so much easier to connect with its history – a history that is not only a story of the lighthouse itself, but of the community it served and protected.

Click here to watch Lake Michigan Shipwreck Hunters and learn more about what lies beneath the surface of Door County’s 300 miles of shoreline.