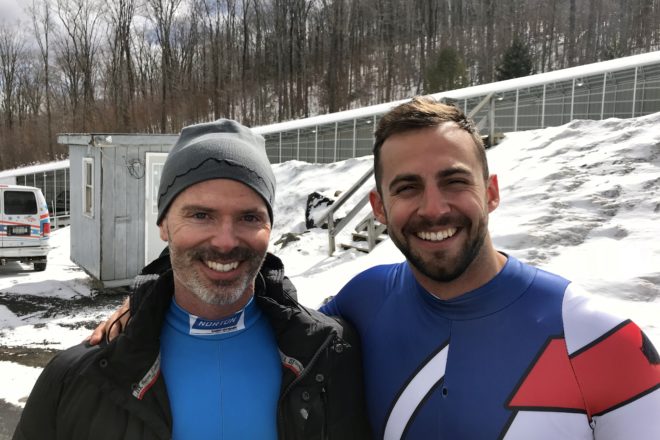 The 2018 Winter Olympic Games concluded Feb. 25 in Pyeongchang, South Korea, after 17 days of competition among some of the world’s best athletes. Luge was one of the popular competitions that featured men’s and women’s singles, doubles, and team relay events.

Mitch Wise watched from his living room as lugers raced feet first on sleds reaching speeds up to 87 mph. The 50-year-old Sturgeon Bay resident and home designer has had a longtime interest in luging that dates back to his childhood. Wise’s dream of experiencing the luge became a reality as he took part in the USA Luge Fantasy Camp at Lake Placid, New York, during the weekend of April 6.

“Since I was about 10 or 12 years old, I started watching the Winter Games,” Wise said. “The luge always appealed to me and I thought it was something I could actually do.”

As time went by, Wise knew the lack of luge tracks in the country and the amount of time necessary to dedicate to training made it a difficult sport to pursue.

“In my mid-20s I looked into it,” he said. “I was too old at that time. It wasn’t a reality for me. It was always an interest but nothing I would take seriously from that point on.”

To Wise’s surprise, the opportunity came knocking. A birthday present from his fiancee arranged for Wise to spend a weekend in Lake Placid, where he took part in the Luge Fantasy Camp alongside Olympic medalists Gordy Sheer and Chris Mazdzer. Sheer won the silver medal in the doubles competition during the 1998 games held in Nagano, Japan. Mazdzer took home silver in Pyeongchang during the 2018 winter games.

The USA Luge Fantasy Camp is “designed to help support the athletes and programs of USA Luge. USA Luge is a not-for-profit organization which oversees the recruitment, development, training and racing needs for the sport of luge in the United States” according to the organization’s website.

Following an orientation on the indoor track, Wise estimates he made about 30 runs during the course of the weekend.

“They started us at the bottom of the track where there are a couple different points to enter,” he said. “The runs last less than a minute. While professionals go upwards of 80 mph, we reached speeds of about 45 mph.”

By the final sessions of the weekend, Wise admits the group of 10 participants was tiring and only about three or four, including Wise, finished their last runs.

“It’s very physical and demanding,” he said. “Your neck is what takes the brunt of the force. There is no support for your head. There’s a point where a G-force hits you in the face and knocks your head back.”

“The whole experience was so out of what you’re ever expecting to do in your life,” Wise said. “It was fun to see in that short amount of time how you could get better and the science behind it.”

Asked if he would ever try it again, Wise responded, “I will be back again next year and I am looking forward to it.”