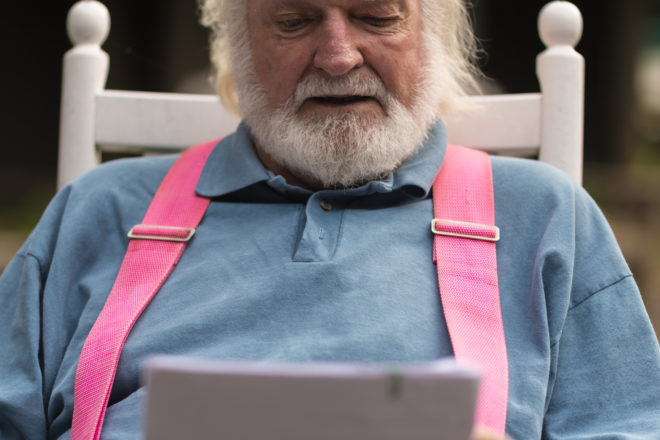 “Fame might be only one bar napkin away,” Jack Redell joked, referring to the practice of jotting an inspiration on whatever paper is at hand, and then, like Wordsworth, recollecting that emotion in tranquility to write a poem.

Redell’s journey toward becoming a poet began in the Windy City where he was raised. After graduating from Lane Technical High School, he enrolled at the two-year University of Illinois at Navy Pier, hoping eventually to earn an engineering degree.

“When my father died,” he said, “I had to work and go to school, and that didn’t work out. A lot of wasted years.”

When Selective Service issued a draft notice, he was given a physical and classified 1-Y, rather than 1-A, sparing him from military duty for the present.

“I couldn’t get a real job,” he said. “I was told numerous times that I wasn’t hired because I might be drafted at a later date.”

In the mid-1960s he was hired as a surveyor helper in Carl Sandburg’s “City of the Big Shoulders,” and joined a union. “I began making some real money,” he said, “and accumulating the years that I needed to earn a pension.” Eventually he began technical drawing, field engineering work and supervising construction projects.

“Not writing much in those years,” he said, “but gathering up ideas for when I had the time. You know, those bar napkins.”

And at the same time, his thoughts were beginning to change. He had been brought up a traditional Catholic but began questioning the religious dogma of that faith, eventually leaving the church. “My peers at the time thought I was merely rebelling for the sake of rebelling.”

His politics changed, too.

“I was early on influenced by a John Bircher uncle and was even pro-Vietnam for a while,” he said. His friends cheered the police as they beat up anti-war demonstrators, and praised the National Guard after the shooting at Kent State. But then he “saw the present state of affairs, beginning in 1968.”

When he explained to his friends that his 1-Y classification occurred because the physician made a mistake recording his weight and height, an error he chose not to correct, they criticized him for being unpatriotic.

During his rebellious period, Redell discovered the Beat poets in the library and improvisational jazz at “the right end of the AM radio dial,” and found that an evening of jazz and wine was “sufficient to get me on track to playing with words.” He “was not writing much, but gathering up ideas for when I had the time. You know, those bar napkins.”

His construction work took him outside, close to nature, where he had poignant experiences that have stayed with him and became subjects for poems later in his life. One time a job took him to a field with a crop of mature corn. The crew was in such a hurry to get in the foundation, they didn’t wait for a harvest, but just excavated.

On another job, an apple tree was in the path of a planned roadway. “I ate the last apple before the tree came down,” Redell recalled.

Especially memorable was the time he saw men in HAZMAT suits burying something in the ground of a building construction site. “I couldn’t tell anyone or I’d lose my job,” he said. “No one knew what was buried there.”

Working as a surveyor, Redell sometimes found himself at a factory demolition site, weeds growing in the cracks of the parking lots. His task was to stake out the underground infrastructure before the building was razed, the empty structure seeming to echo with the voices of people who had lost their jobs.

Redell has folders of early manuscripts that he occasionally returns to, revising and editing, especially after his retirement and move to Northern Door in 2004.

He remembers his first visit to Door County in 1962 when he was 21, on a trip he took around the lake. He began coming to the county for long weekends in 1980 to escape the summer heat of Chicago, and because of the expense of renting rooms, decided to buy his own place, first in Egg Harbor and then in Sister Bay.

“Almost immediately I joined the Unitarian Fellowship in Ephraim,” he said, “not for faith as much as the camaraderie.” This past June for the third time he was featured reader at the Fellowship’s Dickinson Poetry Series. And every Sunday he presents an original haiku appropriate for the service.

He has become an active member of Door County’s vibrant writing community, taking classes at The Clearing, Björklunden, Write On, Door County, and Learning in Retirement. The late Ellen Kort, first state Poet Laureate, was one of his instructors, as have been many of the area’s local writers. He participates in open mic readings, and has published poems in the Wisconsin Fellowship of Poets Calendar, the Museletter, the Peninsula Pulse, and collaborative chapbooks.

Now he is living the good life in Door County with a woman who has been “a partner of 36 years, a couple of dogs, some nice people who have taught and inspired me to greater things,” he said, “and a nice cold Guinness in front of me. All those wrong choices, and here I am. And, hey, bartender, got any more bar napkins?”

Upon observing snowflakes drifting down
from gray morning clouds

alighting on the previous night’s blanket of snow,
I confront a scene framed by trees and their branches

accented in white,
but disturbed by utility wires

While contemplating this out of place symmetry among the branches,
someone next to me says, “It’s snowing”

And now I’m here
insane most likely
reaching for the unreachable
and, you know, those other things