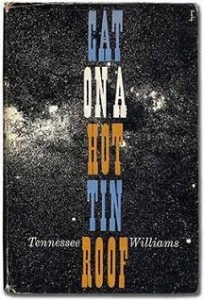 “I wanted to come back to the play after having lived,” director Andy Sachs said.

Sachs directs the Washington Island Players’ upcoming production of Cat on a Hot Tin Roof, which opens July 17. Sachs previously performed in the play as a student at the University of Alabama, and has directed other Tennessee Williams plays, including A Streetcar Named Desire.

Cat on a Hot Tin Roof was written by Tennessee Williams, and received the 1955 Pulitzer Prize. Sachs believes its themes of family dysfunction and greed are still exciting and relevant to modern audiences.

“It’s a stunning play, it’s a classic American play,” he said. “It offers actors and audiences the experience of going through fits and problems in order to compete.”

The action of the play is set in a cotton plantation in the Mississippi Delta, where the children of family patriarch Big Daddy, a redneck who lands on a plantation and rises up to become one of the wealthiest men in the South, compete to inherit his fortune.

Sachs, a native of the South, used his firsthand knowledge of local dialect to help move the action along.

“Most of the plays that I have seen done by Williams, they’re too long, they’re too talkie,” Sachs said. “If you understand the structure and how these families function, there’s a certain melody to it. The dialogue is very rhythmic and there’s a musicality to the production.”

Sachs said he has seen many unsuccessful Williams productions, and admits that when it comes to Williams’ work, he is very competitive.

“I’m not doing anything new to the play. I’m just doing it the way it should be done,” he said.

Sachs also believes understanding the diverse cultural picture of the South is important to the play’s success.

To prepare for the challenges of Cat on a Hot Tin Roof, the Washington Island Players rehearsed for seven weeks. The casting process was difficult for Sachs.

“The characters are fragile, psychologically,” he said. “And so are the plays.”

The cast is comprised completely of volunteers, some of whom serve on the Island Players board, and all who work and live on Washington Island. Two members have never acted before, including Sach’s wife, who plays the role of Maggie (the cat).

Island Players presents Cat on a Hot Tin Roof by Tennessee Williams on July 17 & 18 at 7:30pm July 19 at 3pm at the Trueblood Performing Arts Center.