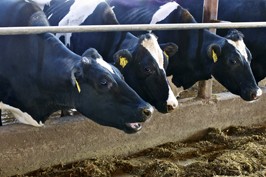 Congress failed to pass a new Farm Bill before closing session prior to the November election, so programs like the Milk Income Loss Contract, which compensates dairy farmers when feed prices are high and domestic milk prices were low, expired Sept. 30. Over $700,000 of MILC payments were made to Door County dairy farmers this year. Photo by Len Villano.

When Congress closed the doors for the recess before the November election it left without renewing the Farm Bill, the legislation that keeps food prices stable and pantries stocked.

“The fact that we’re in this vacuum without legislation is a sad statement about the House of Representatives and their deafness to the needs of farmers,” said Kara Slaughter, government relations director for the Wisconsin Farmers Union.

The first Farm Bill was passed in 1933 and a version of the bill is now passed every five years.

Congress failed to pass a new bill before Sept. 30, when many programs were scheduled to end if they weren’t included in a new Farm Bill. Programs like the Milk Income Loss Contract (MILC) – which compensated dairy farmers when domestic milk prices were low and feed prices were high – passed their expiration dates because no bill was passed.

Over $700,000 of MILC payments were made to Door County dairy farmers this year, according to Tim Siehr of the Door and Kewaunee County Farm Services Agency.

“That’s a chunk of change,” said Brian Gould, a professor at the Department of Agriculture and Applied Economics at the University of Wisconsin – Madison.

In a time when feed costs are high due to drought, the loss of MILC payments could be significant even if the price of milk remains high.

Although high feed costs dent the budget, John Gray of Gray-Aire Dairy said other costs like electricity and gas are bigger.

Gray estimated his family’s dairy in Baileys Harbor has received between $700 and $900 a month from MILC payments.

“If the price of milk goes down, [MILC] definitely helps,” Gray said. “If milk falls again maybe they’ll think about it again. I don’t know what’s on their agenda.”

Gould doesn’t expect to see the MILC program back in a new Farm Bill.

“The only way we’ll see a MILC payment come back is if we get an extension, or if the current Farm Bill proposals include a MILC, and I don’t think that’s going to happen,” Gould said.

While the proposed insurance program would be similar to those for other crops, Gould said milk isn’t like other commodities. It’s perishable and produced daily, and farmers are at a disadvantage because they have to get rid of their milk without taking time to argue about price.

“It only lasts so long, so that’s why we have this price system set up to make it a level playing field,” Gould said.

Slaughter said Farm Bill voting was held up by representatives who opposed funding SNAP and other nutrition programs, something she thinks should go hand-in-hand with farming programs.

“Many farmers I talk to farm, in part, because they see it as their mission to feed people,” Slaughter said. “That’s part of what a good society does.”