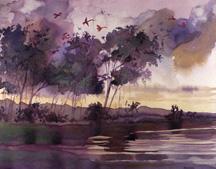 There are at least five good reasons for joining the GREAT Days Arts Tour on September 25, 26, and 27 – the artists themselves. From 10 am – 5 pm, five artists from the group known as the Gills Rock Artists, consisting of Robert Bentley, Jim Maronek, Bonnie Paruch, Wayne Simmons, and Rob Williams will open their studios to the public. Each of these artists are unique, with their own styles and subjects, but alike in their passion for their art.

While art is the headline attraction, the five artists and their spouses have created their own vision of a Door County paradise, through their buildings, settings, and gardens, which comprise the extra treats of a visit. Each of the following galleries will offer an incentive during the special event.

• RD Bentley (1076 Elm Road), a prominent portrait artist, has created an “Alter Ego” with a peculiar and whimsical sense of humor in his fanciful “French Chefs” and “Villages of Door County” series.

• Jim Maronek (1519 E. Door Bluff Road) is known for his restless variety of subjects, styles and media, often based on his world travels, as well as his stage designs for theatres from Broadway to Door County, including current productions at Ephraim Village Hall and The Peninsula Players. 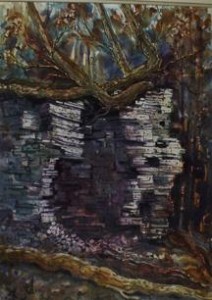 • Bonnie Paruch (11249 County ZZ) has initiated a special project for the GREAT Days, a series of thirty 6×8 inch paintings which celebrate living in Door County.

• Rob Williams (753 Isle View Road), who works in the relatively new medium of water-soluble oils, renders the rural landscapes and barns of Door County with a soft-focus and vivid brush, which make his paintings recognizable and remarkable.

“GREAT” originally stood for Gills Rock Entertainment and Art Tour, and while some of the artists now reside far into the outer “suburbs” of Gills Rock and the entertainment may consist of smelling the roses, the event remains GREAT.