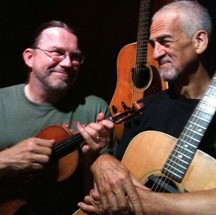 On July 20, Bill Camplin and Randy Sabien will preform together for the Woodwalk Concert Series.

Camplin is well known as a singer/songwriter and acoustic guitarist. He was an integral part of the Milwaukee acoustic folk scene for many years and is also proprietor (along with Kitty Welch) of the World Famous Café Carpe in Fort Atkinson, Wisconsin. The club attracts people on the singer-songwriter circuit, and has gained a national reputation among songwriters.

Camplin says he like dipping his musical toes into the blues and jazz influence Sabien brings to the performance. Camplin and Sabien put on an energized show combining Camplin’s alternative, folksy and lyrically driven ballads with Sabien’s inspired fiddle and mandolin playing. 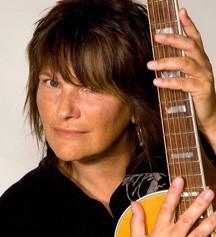 On July 27, as part of the concert series, Jeanne Kuhns will celebrate the release of Beautifully Strange, her first CD accompanied by her band Lost Mothra.

The concert will feature songs from the CD along with earlier originals and cover songs. Lost Mothra (Pat Palmer and George Sawyn), Tony Dale, Marybeth Mattson and Jenny Bieneman will join Kuhns for the Beautifully Strange concert.

Tickets are $15 and all shows begin at 7 pm. Call ahead to reserve tickets. Ice cream, soda and beer will be for sale.