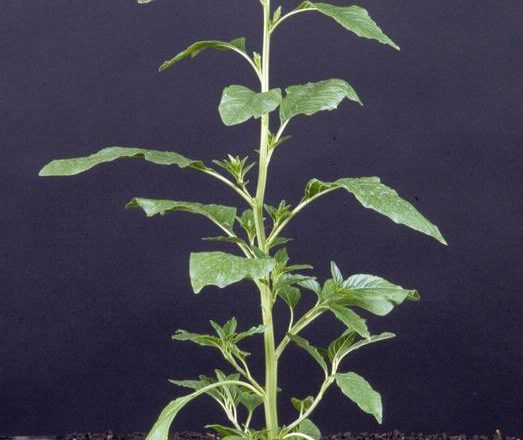 Currently, in Wisconsin, the two weeds that are a major concern are common waterhemp and Palmer amaranth. Both plants are in the pigweed family, but unlike other pigweeds, these plants produce extremely large amounts of seed, they are more competitive with other plants, and they typically emerge later into the season so they may avoid some pre-emergent herbicide applications.

Waterhemp and palmer amaranth are also both dioecious, meaning that they have separate male and female plants. Therefore, there must be crossbreeding to produce viable seeds. This characteristic leads to a higher probability that resistance will develop because of greater genetic variability in the offspring.

As harvest approaches, it is important to take some proactive steps to limit the spread of herbicide-resistant weeds and try to prevent them from coming to your property. As much as possible, clean equipment between fields to prevent spreading weed seeds and harvest questionable fields last. In the future, consider planting cover crops, which can help with weed control. This winter, as you plan for next year, keep resistance management in the forefront of your mind, and educate yourself about how to identify between different weeds, especially when they are small.

Next summer it will be increasingly important to walk your fields to look for weed escapes. Rotating herbicide modes of action and incorporating other weed management practices into your management plan may reduce the likelihood that herbicide-resistant weed populations will develop on your farm. Also, try to avoid other factors that can cause poor herbicide performance including:  spraying weeds when they are larger than the label recommendation, using a herbicide rate below the recommended level, not adding the proper adjuvant, a poor mixing of the herbicide(s), and unfavorable environmental conditions including temperatures that were too cold or excessive dirt/dust on the plant leaves.

If you suspect resistance, the next step would be to contact the Door County UW-Extension office (920.746.2263) or contact your crop consultant. This person can assist with weed identification and help you determine whether there might be other factors causing the weed escape besides herbicide-resistance. If resistance is most likely the cause, they can submit samples for further testing and lead you through management decisions.

Photos, spray records and field history can all help to narrow down what may be the source of the problem. Also, note the pattern of the weed escapes throughout the field. If there is a repetitive pattern or strips down a row, then it is more likely a problem with the application rather than resistant weed populations which would occur in more irregular patches.

When farming, controlling weeds is always going to be a challenge regardless of the situation. Weeds that are resistant to herbicides have been around for decades, but those numbers are quickly growing. Whether you have already battled herbicide-resistant weeds or if you’ve only heard rumors, resistance management is critical for everyone to prevent problems from developing or to keep problems from getting worse.

For more information about herbicide-resistance management, visit iwilltakeaction.com or stop by the UW-Extension office.