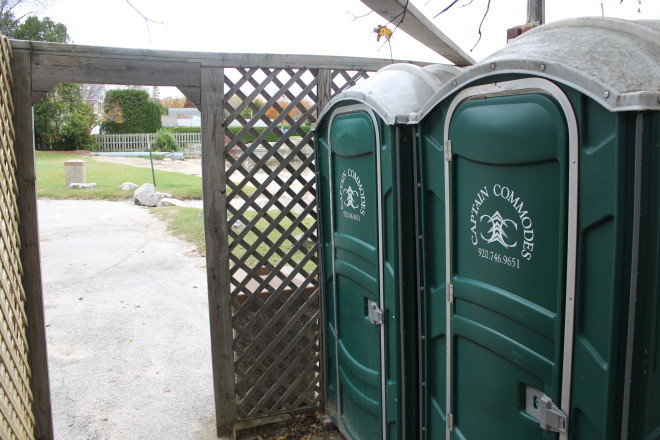 Fish Creek’s waterfront redevelopment plan will address many issues, but one that is pertinent to beachgoers, and the last 20 years of Gibraltar Town Board members, is putting up permanent bathrooms at the Fish Creek Beach. As boardwalks and band shells go up at waterfront communities throughout the county, why does Fish Creek still haul in porta-potties to its beach every year?

“One thing that makes it different for Fish Creek than Sister Bay, Ephraim and Egg Harbor – they have what’s called a bulkhead line, which is an imaginary line in the water drawn offshore,” said Brian Hackbarth, Gibraltar Town Board member and chair of the Parks and Lands Committee. “It’s a legal boundary and instead of the DNR having control of the shorefront, the local town board has control.”

But without a bulkhead line, the Department of Natural Resources (DNR) controls Fish Creek’s waterfront 75 feet past the high water mark, which is roughly the stone wall separating the sand beach from the park’s grass. Anything that the town wants to do within that setback is up to the DNR. This includes putting new coarse sand on the beach to help with water runoff and raking the beach sand a few times each year.

“I spent a whole year just trying to get a permit so I could do this coarse sand like Ephraim,” said Hackbarth, stating that every other waterfront town north of Sturgeon Bay has a bulkhead line.

With a bulkhead line, the DNR relinquishes some, but not all, of its authority on changes to the waterfront. It is the reason why Sister Bay could overhaul their waterfront and why Ephraim has permanent bathrooms at its public beach.

“The town did explore getting a bulkhead line when it reconstructed the dock house about 10 years ago because they were having such challenges with the DNR,” said Hackbarth, but since other municipalities got their bulkhead lines drawn 40 to 50 years ago, the handbook on how to do so was hard to find.

To make matters even more bureaucratically complicated, the Department of Transportation (DOT) maintains its own setback of 25 feet from Hwy. 42.

“For part of the property, the line where those two setbacks meet overlaps so there is a negative building area,” said Hackbarth. “Then there’s maybe two or three feet of separation on the other end of the property.”

In order to get bathrooms built, the town can pursue two avenues: draw a bulkhead line and shift power over the waterfront from the DNR to the town, or apply for a variance from the DNR to change the depth of the setback.

“I’m hoping that the town goes for a bulkhead line because there’s other little things that come up that it would be nice to just do,” said Hackbarth, referring to raking the sand and other maintenance that currently needs the DNR stamp of approval.

But applying for a bulkhead line is not restricted to the beach. The town can extend it all along the public waterfront, including the marina, giving Gibraltar more flexibility in how to move forward with other aspects of the waterfront redevelopment.

The engineers from Short Elliott Hendrickson (SEH) who held a waterfront redevelopment workshop in Fish Creek in early October stated that the DNR has reduced the setback to 35 feet in the past. A 35-foot setback would allow the town to build the bathrooms they have always wanted, but it would leave behind the other perks of an autonomous waterfront.

“With all of the various setbacks (road, shoreland, side yard) in the county zoning ordinance and with portions of the property located within the flood fringe, there will be limited area available for the location of the bathroom facility,” said Andrew Dane, community development expert with SEH, in an email.

When the state adopted the 2015-17 state budget, it required local government to uphold the minimum state standards for shoreland zoning without being more restrictive.

“Shoreland zoning is a partnership between state and counties, who adopt and implement the zoning standards established by the DNR,” said Dane. “The shoreland zoning standards include standards for shoreland-wetlands, lot size, ordinary high water mark setbacks, vegetation removal within 35 feet, height, filling and grading, impervious surfaces, and nonconforming structures. We will work with the Town and the County to address local zoning standards.”

Hackbarth believes the town will not move on the bathroom problem until the entire waterfront master plan has been developed, when they can potentially tandem the project with other plans for the waterfront.