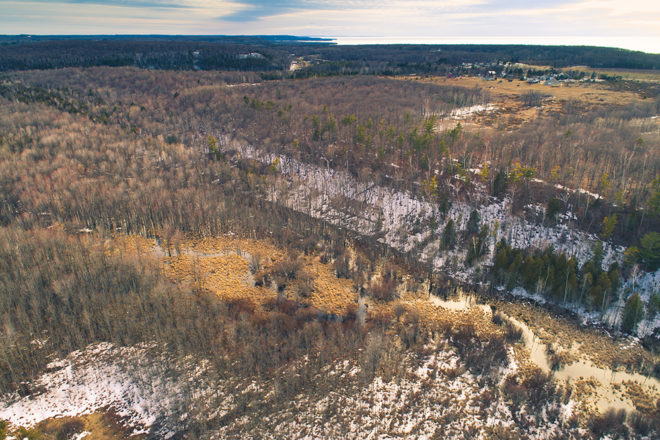 The proposed property purchase includes the property below the bluff as well as the land above the ridge line connected to Highway 42. Photo by Brett Kosmider.

Could Fish Creek become a destination for off-road cyclists?

Town Chair Dick Skare thinks so, and the Gibraltar Board of Supervisors took a big step toward an ambitious plan to make it happen by securing an option to buy 195 acres of land below and above the bluff south of the town center for $2.1 million. The land, owned by Marise Redmann, includes roughly 100 acres adjacent to the Settlement Courtyard Inn on Highway 42, and almost 100 acres connected to that below the bluff behind the Fish Creek Park.

The purchase requires the approval of town electors at a town meeting in the fall. Information about the property and potential uses will be available at the town’s annual meeting April 16.

One potential use that Skare and officials proposed is to create an off-road biking hub on the land. Substantial trails exist on the property already, and it was a popular underground cycling spot in the 1980s and 1990s.

“A bike hub could have substantial economic impact for Fish Creek,” Skare said. “It would connect to Peninsula State Park and potentially out to Spring Road via a spur that’s part of the purchase. In places like Copper Harbor, bike hubs have become major draws.”

Fish Creek is already home to the only two major bike-rental businesses in Northern door, but it has no marked bike lanes. Skare said the development is an opportunity to stamp Fish Creek as a destination for silent sports and a younger generation of visitors. He has been in discussions with Jake Carsten of the International Mountain Biking Federation to review the property and create recommendations for trails.

Scott Chapin has seen first-hand the economic impact that off-road bike trails can have. Chapin has been involved in trail-building and planning in the Ashland, Wisconsin, area for 25 years, and he has completed a study that showed that silent-sport enthusiasts taking part in organized events brought $30 million into the area’s economy every year.

But a bike hub isn’t the only potential use for the property. Initial board discussions also include plans for an attainable-housing development on the portion of the property above the bluff.

“The housing study is really what put us over the top with this idea,” Skare said. He has had conversations with officials from Neighborworks, which has developed affordable homes in underserved neighborhoods in Green Bay and is interested in spreading its program to Door County.

If housing does come to fruition, the town would likely extend sewer up to the south end of the town, potentially connecting Hidden Blossom and Little Sweden. Skare said there could be rural development assistance grants available for that project.

Supervisor Steve Sohns emphasized the need for multimodal trails to be included in the project, potentially using the property to connect portions of the Door County snowmobile trail above and below the bluff.

But the project still needs to be sold to the community. The purchase price of $2.1 million will give many residents sticker shock. The town brings in about $16,000 per year in property taxes from the property, which would be taken off the tax rolls in the short term. Grants for watershed improvements, affordable-housing development and trail-building are all possibilities to offset the cost of the project.

Skare said that if the town were to realize $15 million in development, it could bring in a projected $48,000 in tax revenue annually, but that could take years. Sohns said the town will have to be clear with residents on a plan B.

“People are going to wonder what we’re going to do as a contingency plan if it doesn’t go the way we want it to go,” Sohns said. “If that happens, we may have to sell the upper portion.”

The town has long coveted the lower portion of the property, but separating the parcel would have jeopardized the building permits that were secured for it decades ago.

Brian Hackbarth said the town must set a reasonable expectation of how fast the board can turn the project around in light of how long it has taken to move the beach project forward.

Other opportunities for the upper parcel include a satellite campus for the University of Wisconsin-Green Bay that would focus on biology, hotel and tourism management, or the arts, plus a National Estuary Research Reserve System center. Skare sees the bike trails as low-hanging fruit.

“The bike hub would be the least expensive thing we can do since it doesn’t require substantial facilities to get it off the ground,” Skare said.

But the trails aren’t free. Creating a hub that would be an attraction to cyclists throughout the region would require substantial trail work and expense. Once built, Supervisor Bill Johnson suggested a friends group of cyclists would likely be charged with ongoing maintenance, much like those that maintain and build ski and bike trails in the state parks. Chapin said costs to build trails could run anywhere from $5,000 to $25,000 a mile, depending on how intricate they are and what features are included.

“In Hayward, the Gateway Trail is about three miles, but it’s probably the most-used trail,” he said. “It’s got a lot of berms and features, but it’s beginner-level and well built. Millenials are not going to come unless you have features on your trails.”

Next week: We’ll dive deeper into solutions to Door County’s affordable-housing crisis when the Sustainability Issue focuses on the issues that are driving costs up – and people out – of the peninsula’s housing market.