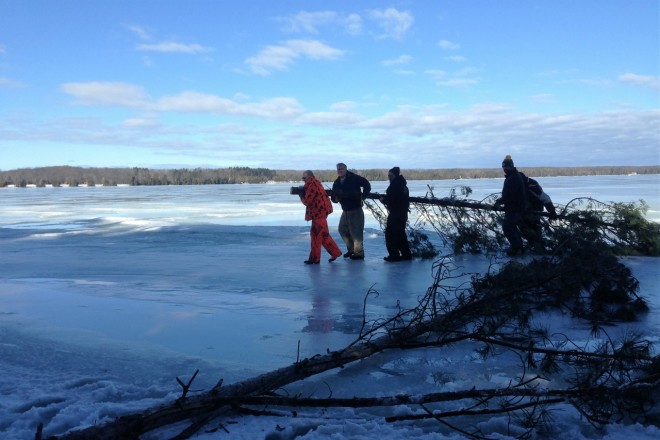 During the past 12 months, we developed a plan for 30 trees to be placed on Kangaroo Lake’s shoreline in the winter of 2016. Trees needed to be harvested later than October and had to be on the ice by end of February per the regulations of the Wisconsin Department of Natural Resources. Then, “El Niño” came. 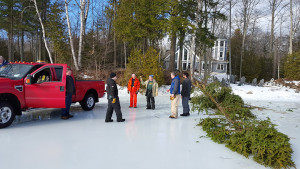 Our lake wasn’t iced over until January. We had temporarily planned on Saturday, Feb. 20. It wasn’t until Feb. 14 that Tom Anschutz gave me his judgment that with the latest cold snap, he thought the ice would be good enough for his truck and our workers. So, it was all ahead. Go! Plans needed to be worked out with Dan Barnowsky of Harbor Lumber, who would harvest the trees from The Nature Conservancy (TNC) land adjacent to Kangaroo Lake and put them on the ice for us to move. Our volunteers had to be contacted and confirmed. The entrance gate had to be unlocked by TNC.

Then, on Feb. 19 as I was driving to Door County with my wife Jane, Tom Anschutz sent me a text: “I’m not sure about the ice with the warming this week and the water standing on the ice. We’ll have to check in the morning. You know, insurance doesn’t cover vehicles on the ice.”

So, I knew we had 30 trees that I thought were already off of the boat launch and on the ice like last year. A long, sleepless night with terrible fantasies about what to do with the trees if we couldn’t move them to their 15 locations all over the lake.

Last year, the temperature was 2 degrees with a -25 degree wind chill and we placed 14 trees.

Could four-wheelers or snowmobiles move the trees? No. We needed a heavy-duty, four-wheel drive pick-up truck. 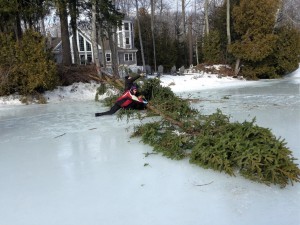 How would we turn these long trees around if we decided to use them in 2017? Oh, we couldn’t use them because they need to be freshly cut. What if the ice gave way and they were floating on the lake? What about wasting all of our great volunteers’ time and money spent making themselves available the next day? Would Dan Barnowsky even partner with us again? We were meeting at the boat launch at 8 am. We can’t risk Tom’s truck going into the lake.

At 7:45 am, I arrived with my son and son-in-law who came up from Milwaukee to help. Guys started arriving. Tom Anschutz arrived and told us Barnowsky had decided not to put the trees on the ice except for about seven because he wasn’t sure the ice would support his very heavy equipment. He placed the other 23 along the road approaching the boat launch. The guys all came together. It was about 35 degrees and partly sunny. An absolutely beautiful day for our project! We discussed it and with Tom’s guidance, we made the decision to go for it.

So, I explained the various roles of each guy, including Dave Hoffman who, with his son-in-law, was going to follow the installation of trees with securing them with 3/8-inch galvanized cable to the shoreline and to each other.

We hauled the first two trees to the Kangaroo Lake Resort (Horvath’s). Then we hauled five trees to the west side near Beach Road (Schneider, Cooney and Aurrichio’s). Then three more trees 300 yards south to Whitacre’s. How can we move these guys all over this lake without bringing more vehicles onto the ice, increasing risk? We moved our vehicles all around the lake on land and down plowed driveways near our installations. How long would it take with more than twice as many trees as last year?

It takes some time to haul two to five trees at a crack (pun intended, referring to the ice) behind the truck the length of the lake moving slowly. We actually placed twice as many trees in the same amount of time as last year because we had learned a thing or two. 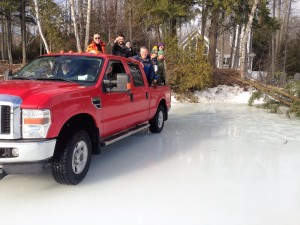 Then it was off to the south end. We need to haul 15 trees down near the dam. We were very well organized. We had to get the guys securing trees down to the south end before we left it. The heavy lifting crew was working in some lousy conditions. Sometimes we had to haul trees by hand through 6” of water and 9” of slush. Getting the branches bogged down in the slush made it almost impossible to drag.

There was lots of water and slush standing on various parts of the lake. We kept the truck moving and hauling and finished installing the trees around noon.

Our Kangaroo Lake Association members thank those who gave some blood, sweat, hard work, anxiety, but no tears to help the eco-system of our lake.

Now we can begin watching the “magic” around our fish sticks, begin telling stories, and recruiting other lake property owners to take advantage of the upcoming last year of our grant by offering to “host” a three-tree fish stick complex in front of part of their property in 2017. We are the only ones in Door County doing this now (Clark Lake is showing some strong interest) and we are considered leaders in the state because of our efforts. You can read more on our website (kangaroolake.org) about the advantages of “Fish Sticks” and view pictures as well.