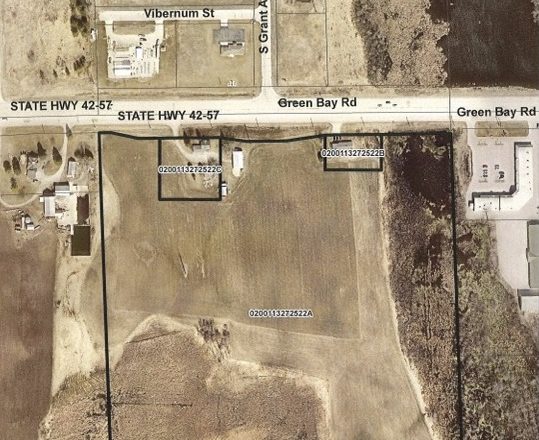 This map shows property that’s currently in the Town of Nasewaupee along Highway 42/57, where Fleet Farm is interested in building a new store in the Sturgeon Bay area. Source: City of Sturgeon Bay.

Fleet Farm wants to build a new store along the west entrance to Sturgeon Bay.

On Aug. 17, the city’s plan commission agreed to schedule a public hearing for Sept. 21 to consider whether to amend Sturgeon Bay’s comprehensive plan to develop property for commercial use for the project across from the Salty Seagull miniature golf course along Highway 42/57.

Fleet Farm is interested in purchasing three lots with approximately 40 acres in the Town of Nasewaupee that the company wants to annex to the city. Mark and Cindy Kerscher own the property, which is designated for rural/agricultural use.

From the city’s standpoint, Sullivan-Robinson said switching to commercial would be an appropriate use of the property because the highway corridor in that area is primarily commercial.

“It’s surrounded by commercial uses on three sides, with some more [agricultural uses] to the south and southeast,” he said. “In addition, the site has sewer and water connectivity, which is not available to properties farther east.”

Sullivan-Robinson said approving the site for the construction of a new Fleet Farm store would be similar to a rezoning process, with a public hearing and a recommendation by the plan commission acted on by the common council to create an ordinance.

Community development director Marty Olejniczak said the city has tried to keep commercial growth within the city and not sprawl out too much.

“That’s just a good policy,” he said. “We try not to extend sewer and water too far and try to utilize the existing road network and existing sewer network.”

Olejniczak said “a lot has changed” since the city adopted its current comprehensive plan two years ago because most of the sites available then for commercial development “have already been essentially spoken for,” such as for apartments and other projects.

“Essentially, we kind of wiped out the land we had available for this type of development,” he said.

Olejniczak said the city in the past has tried to avoid commercial development along the Highway 42/57 corridor on the east side.

“We’d like to keep that corridor as rural as possible for the time being,” he said.

Olejniczak said the store would be considered a large retail development under the city’s zoning code and subject to “quite a bit of scrutiny over their site plan, building architecture and so forth, compared to smaller stores.”

Dan Cohen of Mid-America Real Estate appeared before the Sturgeon Bay Plan Commission to present Fleet Farm’s project plans for the site. He said the building the company is looking at constructing in Sturgeon Bay is a new prototype consisting of a 91,000-square-foot store with a 55,000- to 60,000-square-foot outdoor center.

“We really need, just for our store, about 11-12 acres,” he said. “Typically with our store, we bring a convenience store/car wash/gas station, and that’s our plan here.”

Though the entire property is about 40 acres, Cohen said the south half is “substantially wet” and cannot be developed.

“We’ll be acquiring that – part of the 40 acres, part of three properties – but our development will substantially be the front, north-facing 18 acres,” he said.

Cohen said Fleet Farm hopes to face the storefront to the north and work with the Wisconsin Department of Transportation to line up the access point that exists across the highway to get people in and out of the site safely. They’d like to break ground next spring and open in the spring of 2024.

Given that there is currently no grocery store on the city’s west side, commission members asked about the groceries Fleet Farm might sell. Cohen said a grocery store wouldn’t be on Fleet Farm’s site, though about 15%-20% of a store’s inventory is composed of dry goods, beverages and packaged items.

The company is no longer run by the Mills family, and Cohen said the new executive team is building smaller stores than in the past: 90,000 to 135,000 square feet, plus outdoor storage.

The Sturgeon Bay store would have a full-time equivalent of about 25 employees, plus five salaried positions, with total staffing of around 125 full- and part-time employees, Cohen said.

Nasewaupee town chair Steve Sullivan said it would be nice to see Fleet Farm develop at that site and remain in the town, but he expected it would be annexed to the city for the municipal sewer and water service the town does not provide.

Under state law, Sullivan said Nasewaupee would still be eligible for property-tax revenue the town would otherwise receive for up to five years after annexation occurs, based on what the land was valued at at the time of annexation.