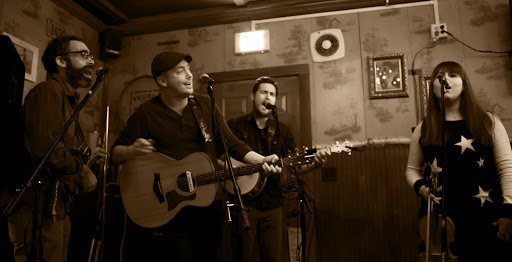 The first thing that caught my eye when perusing the website of Madison-based Emerald Grove is the band’s self-described genre of “switch-blade folk.”

Naturally, it was one of the first things I asked about during a recent phone interview with Emerald Grove guitar-banjo-harmonica player, Kyle Smith.

Kyle and his three bandmates (Cory Mandt on banjo and guitar; Angela Dominguez on violin and keyboard; and Jake Stroup on mandolin) will bring their high-energy, edgy folk and four-part harmonies to the Door County Brewing Co. on Saturday, Sept. 26.

Emerald Grove’s roots go back to the “teenage angst” days of Kyle and his childhood friend, Cory Mandt. Playing in hardcore and hard rock bands as teens, they “slowed down a little bit,” and got into the soothing sounds of acoustic and folk.

“I cut my hair and wore looser pants,” he joked about making the transition. “No, we kind of went through the hardcore phase, me and Cory, and afterwards we kind of gave that up for a little bit and naturally went back towards acoustic guitar and tried to play something a little bit softer.”

Drawing inspiration from their beginnings and first album the duo recorded together, In An Emerald Grove Confessional, they created Emerald Grove.

“It was a tribute to where Cory and I started and the transition we made from then until now,” Kyle said. “We had always practiced in a barn that was in these rolling hills on Irish Lane and that kind of fit the name as well.

“We added in a couple friends I had gone to school with – Angela, playing a little bit of fiddle, and our buddy, Jake, who we knew from school as well, playing some mandolin,” he said. “With this lineup, we’ve been together for about a year-and-a-half, two years.”

In that time, the band has released one EP, A Hard Fought Autumn, and is working on a second. With a heavy focus on vocal harmonies, the band often draws comparisons to Crosby, Stills and Nash and Duluth-based bluegrass, folk-rock outfit Trampled by Turtles.

Their live gigs are a good mix of covers and originals, with some Emerald Grove audience favorites being “Austin,” an old-timey story of a bank robbery (listen to the song on the band’s website, EmeraldGroveMusic.com), as well as “Maria,” a soft number that picks up heavy toward the end to get the audience up and dancing.

As for covers, expect to hear anything from The Beatles and The Band to modern bluegrass.

“When we look at covers, we look at something that’s timeless and universally known but then we put our own little spin on it as well,” Kyle said. “So it’s something people can recognize but it has our style and flair to it.”

Catch that style and flair during the band’s Door County debut on Saturday, Sept. 26 from 7 – 9 pm at the brewery, 2434 County F in Baileys Harbor.