After nearly a lifetime of considering this an outdated and effete drink, I recently discovered the beauty of the martini, in particular, the dirty martini.

Even before I saw my first Bond film at a theater – Goldfinger, 1964, in which Bond utters the immortal line, “Shaken, not stirred” – I was already an experienced martini maker. 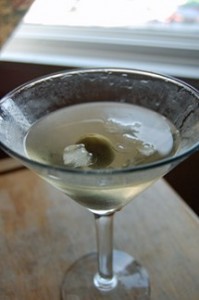 I’m pretty sure it was the year before I saw Goldfinger that I started making martinis for a lawyer who was courting my mother. He would come over to the house just in time for Perry Mason reruns after the late news. He’d bring the martini fixings – gin, vermouth and cocktail onions.

Being the oldest of four, he taught me how to mix the gin, a whiff of vermouth and crushed ice (I remember his disdain for the small ice cubes that certain members of my family made, which frustrated the lawyer and caused him to bray, every time, “We need bull cubes!”). I would strain the drink into the glass made for it, skewer a couple of cocktail olives on a toothpick, which he would use later to work in his big teeth after eating the T-bone steak I grilled for him on the Hibachi on our back porch.

Somehow, all of that slave labor put me off both steak and martinis for a long time. But my love for piano might come from Fred Steiner’s thrilling “Park Avenue Beat,” which was the Perry Mason theme song.

Anyway, I had no interest in martinis, certainly not as a child, and not later because it seemed to belong to another generation, along with Rob Roys, Tom Collins and Old Fashioneds. Too many other delicious drinks out there to be concerned about these.

Yes, you say, what about martini joints? Certainly they have even reached your isolated farm territories in Wisconsin? Your average hipster might ask. Yes, we even have coffee shops and tattoo parlors! We have just about everything your average consumer could ever desire. But I’m not a martini bar guy. Just seems a bit frou-frou.

Just a few months ago, after a long and trying drive, I went to a bar/restaurant to meet a friend. Someone sitting at the bar was drinking a dirty martini. I don’t know why it looked so alluring, but I could not resist. I ordered a dirty martini and fell in love with the sting of the alcohol and the soothing, briny salve of the olive juice and the rich oiliness of the olives.

Mine are made with vodka, olive juice, lots of olives and crushed ice. In the recent heat wave, I kept the crushed ice in.

For variety, a twist of lemon brightens everything up. Let’s call this version a Dirty Sunshine Martini.

You can also play around with olive varieties and brines. I’m using queen-sized olives stuffed with garlic at the moment. Blue-cheese stuffed is another favorite. But there are so many olives out there – go crazy!

Perhaps I should find a steak-stuffed olive to complete this cycle of discovery I seem to be embarked on, because I absolutely refuse to buy a Hibachi. Wonder if I can find the old Perry Mason streaming somewhere? Da-dah-da-dum…