Dan McCarty has been a head coach in Brussels, Wis., and in Eidsvoll, Norway. His career as an assistant has taken him to Sturgeon Bay, where he won a state championship, UW-Stout, UW-Eau Claire, and Minnesota-Duluth. 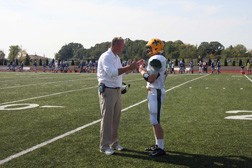 But now, after an unlikely sequence of events, McCarty is about to begin his first season as the head coach of St. Norbert College, a perennially strong team in Division III football.

After a long and successful career, Jim Purtill suddenly stepped down as head coach at St. Norbert in 2013. His successor, Steve Opgenorth, brought on McCarty – then the head coach of the Southern Door Eagles – to be his defensive coordinator. Then, after last season, Opgenorth unexpectedly resigned after the Green Knights had a poor season by their standards. St. Norbert promoted McCarty to head coach almost immediately.

McCarty enters the season full of optimism as he seeks to instill his coaching values in a program that has a lot of potential. He has made establishing a year-round recruiting plan a priority for his staff, and believes he will be able to sell this program to talented players.

“[St. Norbert] sells itself when recruits and families step foot on our campus and see how new and beautiful everything is,” said McCarty. The college has made many recent expansions and improvements, and new athletic buildings are at the top of President Tom Kunkel’s to-do list.

Leading the Green Knights does present some challenges for McCarty, such as running a program of 130 players and avoiding cuts to the roster. While many Division III schools “gray shirt” players and make significant cuts to the roster, St. Norbert’s program works to keep the players that they recruit.

“We have to do a lot better of a job up front with evaluations on talent because we don’t want to make cuts when kids get on campus,” said McCarty. 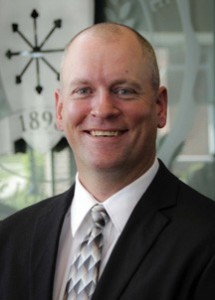 McCarty is confident that his coaching staff will give him the support he needs to lead the team. He is confident in Defensive Coordinator Ryan Osborn, and his offense is headed by an old friend and Southern Door alum, Al Johnson.

“Al is one of the best football coaches that I’ve been around,” said McCarty. “The best thing about Al is that he is just a great guy and our kids absolutely love being around him on and off the football field.”

Johnson is also excited about the opportunity to be Offensive Coordinator for his friend, and said that working with McCarty is one of the best parts of his job.

“I always say I have the best boss,” said Johnson. “I get to just be myself.”

Johnson was an all-state player at Southern Door before playing on the offensive line for the Wisconsin Badgers and three NFL teams. Former NFL head coach Tony Sparano once hailed him as the most intelligent lineman he ever coached. He served as McCarty’s offensive coordinator for one year at Southern Door before both men made the move to coach under Opgenorth at St. Norbert.

Their partnership is an example of the chemistry McCarty tries to instill in all his teams.

“I’ve always tried to create the tightest team possible and one where the players put the team first,” said McCarty. “A team that believes in itself and one another.” 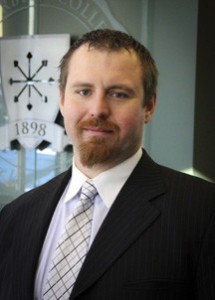 Johnson says he coaches in a program where everything is for the good of the team.

“When you work in an environment like that where there are no egos, it is enjoyable to come to work every day to do something you love,” said Johnson.

Both coaches believe their work can translate into great success this season, which begins Sept. 5 at home versus Carthage College.

“I’m excited for the season, as is every player and coach in our program. I believe we have a ton of talent returning along with a talent-loaded incoming freshman class,” said McCarty. “We’ll put a good football team out on the field week in and week out.”