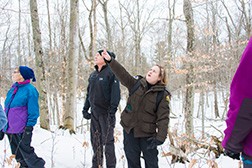 The temperature outside may be frightful but the views at the state parks in Door County are absolutely delightful. Enjoying the outdoors in the winter might take more planning than when the temperature is above 50 degrees but if you set out for any of the following trails, your efforts will be greatly rewarded.

We asked the state park naturalists and supervisors from Peninsula, Whitefish Dunes, Potawatomi and Newport state parks for their must-hike trail picks and here is what they had to say:

If you love shoreline views, the Lynd Point-Fern Loop at Newport State Park is the trail for you. At 2.5-miles, it is best taken on with a good pair of hiking boots or snowshoes.

“Lynd Point trail offers the most shoreline views of any of the trails at Newport State Park,” Hefty says. “It is also the most rugged shoreline in the park, offering great views and photo opportunities. The trail takes you up to and over an ancient shoreline where there are rock formations and in the winter, offers protection to different species.”

Though Hefty says wildlife keeps quiet in the winter, you still may be able to see signs and tracks of porcupines, deer, coyote, squirrels, weasels, and shoreline and inland birds.

If variety is your flavor when it comes to the outdoors, check out the snowshoe trail near the Nature Center at Peninsula State Park. This 1.5-mile trail overlaps the White Cedar Nature Trail initially before branching up and across the escarpment, crossing Skyline Road (in two places), and looping down to the Sunset Bike Route/Hidden Bluff Trail before meeting back up with the Nature Center.

Ridges, escarpments, forests, bluffs and a few meadows will all be part of this amazing excursion, Harris says.

“The trail initially leads up to a level ‘ridge’ that was formed 5,000 years ago by glacial Lake Nipissing. The trail then switchbacks up the escarpment, a rock ridge formed about 440 million years ago,” Harris explains. “Notice how the forest changes as you reach Skyline Road, then walk atop the escarpment. Earlier, more cedar and hemlock trees were noticeable.”

Snowshoers and hikers can enjoy seeing large red oaks, beech trees and a few large cut oak stumps that harken back to the September 2011 windstorm that closed Peninsula State Park for five days.

“As you cross Skyline again and descend down towards the bike trail, note the views,” Harris says. “With winter, you may see the islands of Green Bay through the bare trees.”

Harris recommends individuals take time to feed the chickadees outside the Nature Center either before or after their hike, and to keep an eye out for pileated woodpeckers and the tracks of squirrels and turkeys.

Although most of the hiking trails in Potawatomi State Park have been changed to ski trails, Ripp still lauds the Ice Age Trail (the eastern terminus of the trail lies in the park), particularly the portion along the shoreline, as well as the Ancient Shores Nature Trail.

“The Ancient Shores Nature Trail is a half-mile loop going up and down the various old shorelines of the area,” Ripp says of the trail. “It is located directly across from the Nature Center parking area. This is a very tranquil hike in both the winter and summer months.”

Prepare for the chance to see evidence of deer and fox along the area.

The 2.5-mile Black Trail at Whitefish Dunes State Park doesn’t rest during the wintertime, making it a must-hike for lovers of forests and wildlife.

“The trail begins near the rocky shoreline featuring paper birch, towering white pine where eagles perch, and glimpses of crashing waves of Lake Michigan. As visitors hike along the trail, it changes from shrubby openings to towering hardwood forest with hemlock and white pine spotted throughout,” Rock says of the trail. “Due to the shallow soil layer, trees and plants growing in this rocky environment have limited root space thus making it difficult to grow and survive. Large number of dead trees allow for increased sighting of woodpeckers.”

The trailhead is located next to the park’s shelter building near the parking lots.