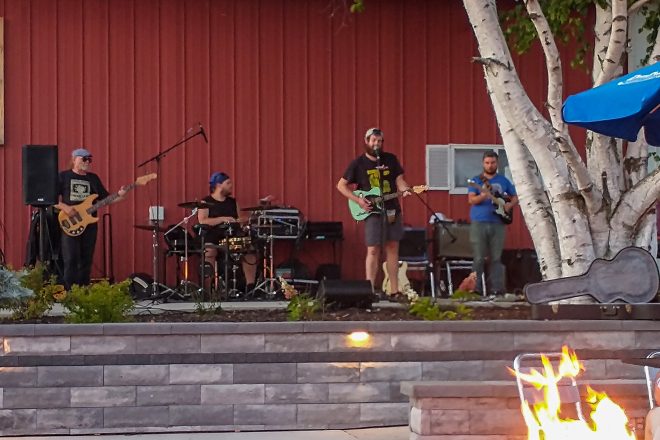 Despite the title of his band, Frank Maloney & His Big Country Unit donned not a single cowboy hat during a recent performance at the Cherry Hut outside Fish Creek. Instead, each band member wore a different style: a baseball cap, flat cap, bandanna and a baseball cap turned backward on Maloney.

The band brought a rock-and-roll vibe to old blues, soul and country staples, and it was immediately obvious what kind of country the band’s name refers to: not modern radio hits, but the likes of Johnny Cash and Waylon Jennings.

“This is an old country song. Would you believe it’s about drinking?” he said before beginning a Rodney Crowell number. The band maintained a theme of blues songs for the evening: “Tombstone Blues,” “Whiskey Blues,” “Transient Blues” and “Cocaine Blues.”

Maloney’s deep voice – with a hint of country twang and just a pinch of Bob Dylan – carried well. And he didn’t have a harmonica or banjo; instead, he and his band played their interpretations with guitars, bass, piano and drums, delivering a big sound for songs from every genre.

In another digression from the archetypal country music performer, Maloney often ended a song with a “Thank you, thank you very much” that was reminiscent of Elvis Presley. He also strayed into heartland rock, performing Bruce Springsteen’s “State Trooper” with a Big Country Unit twist.

Maloney’s inspiration from old-school country manifested in his originals, such as the barn burner “Country Music Saved My Soul” and “Out from Texas.”

As the sun set, only the fire pits on the patio and a string of lights in a gigantic birch tree overhead provided a source of illumination for the band, but Maloney and his unit just rolled with it, playing through the end of their set as the nearly full moon rose into the sky.

Frank Maloney & His Big Country Unit will perform on the Waterfront Main Stage in Sister Bay on Sunday, Sept. 5, 6 pm.